Created as a filter for night sky photography, the Natural Night filter from NiSi is also pointed as a solution to reduce light pollution on photos of cityscapes or video shot at night. Something I tried for the second part of this article. 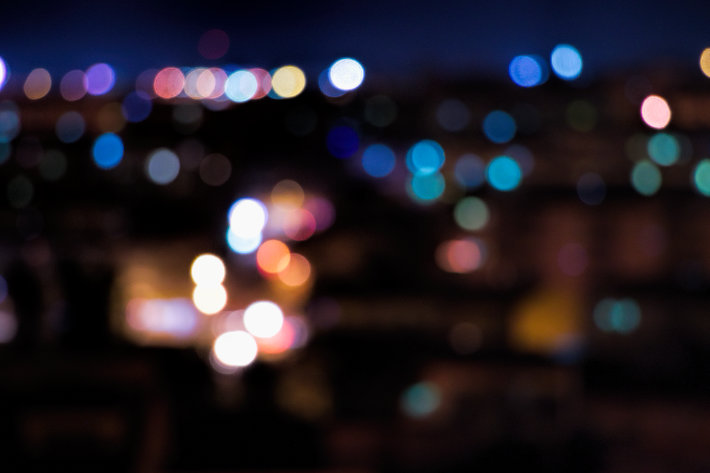 The ability to reduce light pollution when photographing the night sky was covered in the first article about NiSi’s Natural Night filter. Now it is time to look at its uses in video and cityscape photography.

Besides night sky photography, its first intended use, the NiSi Natural Night filter can also be used for cityscapes at night, and for video.  Although the astrophotography uses was what attracted my attention – and the promised reduction in light pollution – I saw different photographers using it for cityscapes, with a variety of results, some of which revealed too much of a color cast for my liking. Read my first article for some more notes on this aspect. 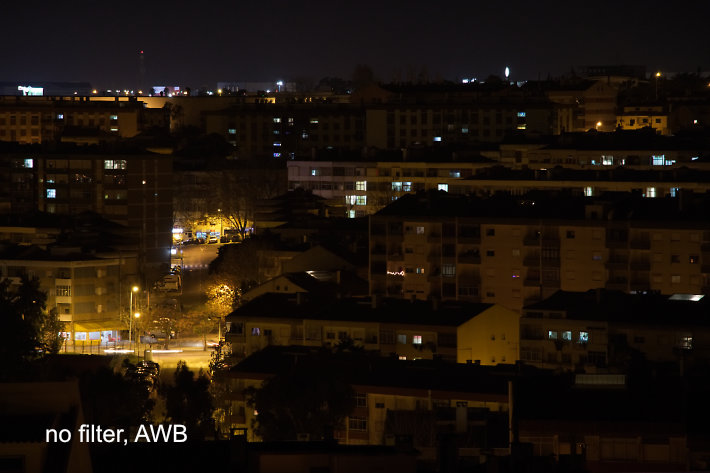 Through different tests, I found out that if you’re willing to take the time to adjust filtering, using whatever tools you’ve in your camera, you can, in fact, use the filter as a way to get images free of the usual skyglow you get on some cityscapes.  Obviously, you can take this further in post-processing, but being able to get a cleaner image to start with may be a good solution for those who do not want to spend more time than needed using the computer. 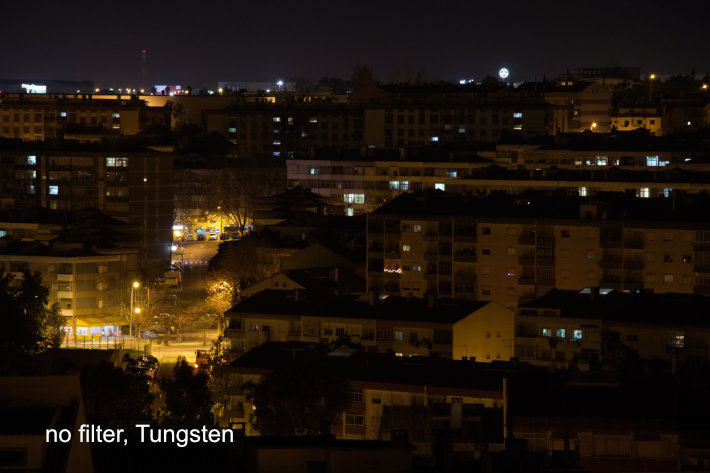 This second article takes a look at some of the options, for both cityscape photography and video. Although much of the techniques/tips suggested in the first article apply here, I felt there was still enough novelty to justify to continue sharing my notes. Putting aside the differences between stills and moving images, the results where very similar, so the stills published here serve as a guide to what you’ll achieve in video, if you work with the same Neutral Picture Style for both cases. Exposure times and adjustment will always have to be considered, but except for that, the results are similar. 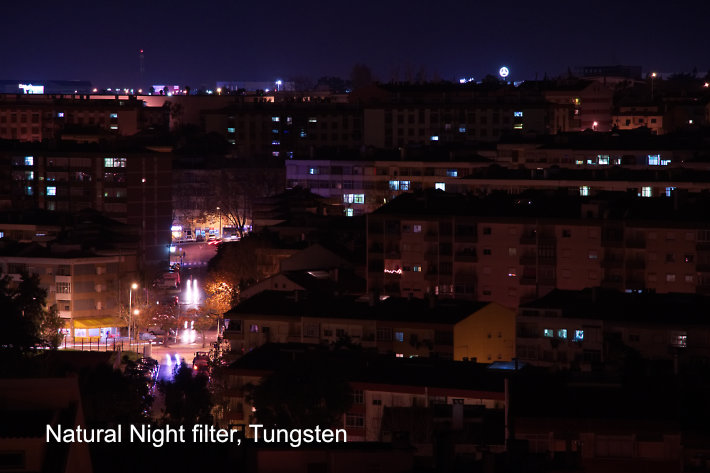 The first article reflected on the use of Canon’s White Balance Shift feature to achieve a good tonal compromise when using the NiSi Natural Night filter, in order to reduce the magenta cast the filter introduces. That’s still valid here, but because we’re working with cityscapes, where the presence of white is, usually, more common than in images from the night sky, I wanted to see how another tool from Canon would react: the AWB with Ambience and White Priority. 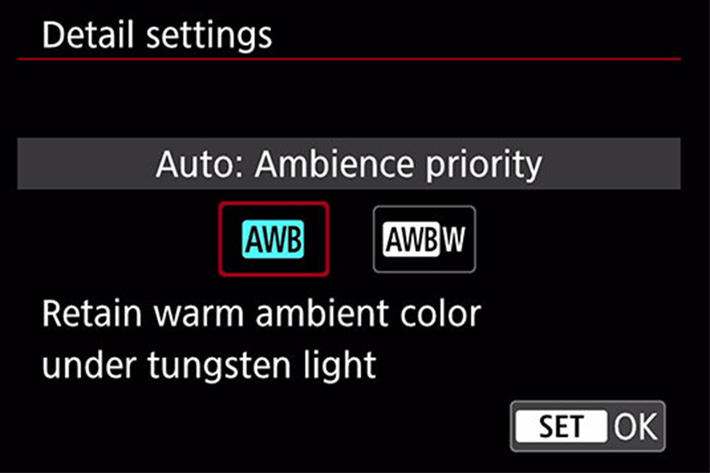 Auto White Balance was used on some tests for the first article, but I referred then that I usually would go for Tungsten, when photographing night lights, in order to clean the yellowish colour cast. Some time ago Canon introduced a variation of its Auto White Balance or AWB, the AWB W or Auto White Balance White, which aims to get better whites under tungsten light. In fact, the regular AWB from Canon is many times considered not good to use under tungsten lighting, because it looks too warm in some situations. Pointed, by many, as a problem of Canon’s AWB, the metering reflects, apparently, Canons choice, as it is based on Ambience Priority. As the manual states, “With the standard (Ambience priority), you can increase the intensity of the image’s warm color cast when shooting a tungsten-light scene.” If you want to get the purest white possible, then AWB W is the correct choice. According to Canon’s manual, “If you select (White priority), you can reduce the intensity of the image’s warm color cast.” 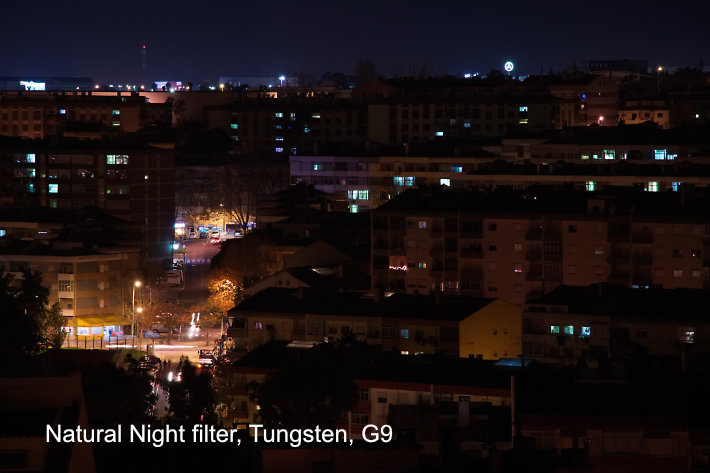 No tool is perfect, so although AWB W does some magic, you’ll find that it also introduces some problems. Again, reading through Canon’s manual, there are some warnings about AWB W that should be taken into consideration: when multiple light sources are present in the frame, the warm colour cast of the picture may not be lessened, and when flash is used, the original AWB is used. One interesting note that points out a possible use of AWB W is related to a preset mode present in many Canon cameras: Food Photography. Something you might want to explore if you’re a Canon user and food photography – or video? – is a subject you work with. 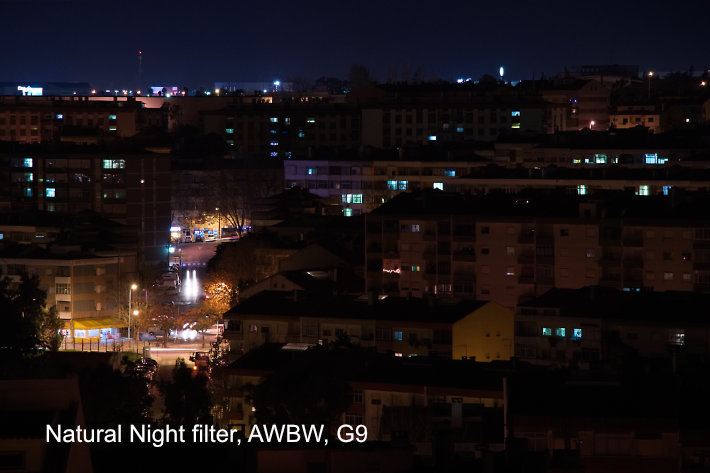 The series of images published here demonstrates how the same scene changes as the NiSi Natural Night filter is introduced, and what can be done to better explore what it offers, while trying to keep colours true to the original. Let me guide you through the images, briefly explaining some more about the why they were taken. When photographing scenes with different lights I usually will start with an out of focus image, that just gives me the colour from different light sources, so I’ve an idea of the image without having to think about more than light and color. That’s what the opening image shows, although in this case, and as I already knew the amount of filtering used with the NiSi Natural Night, the image reflects the changes I made in camera. 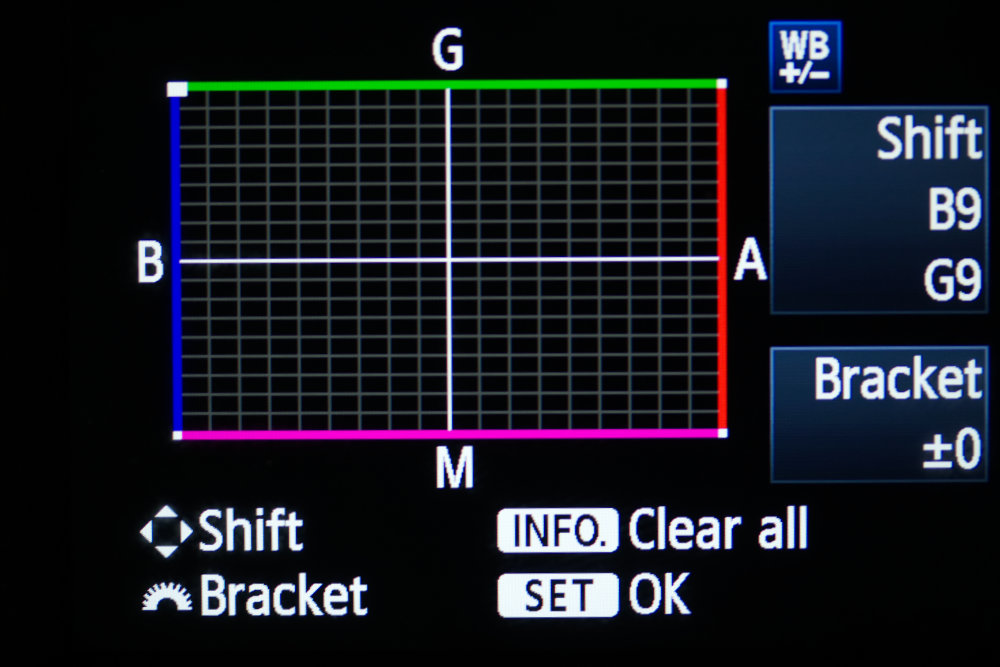 A filter without a future

The sequence of images published here goes from the AWB shot without filter, through the Tungsten, a pair which shows that AWB does well here, and could be used if you did not need to have precise colour temperature between shots. Tungsten is used for consistency, but adding the Natural Night filter introduces the magenta colour cast. To reduce it I adjusted Green to 9 (please see my previous article for an explanation of the whole process) and as with the previous article, I knew I could get a better result by changing the value of Blue, for the sky, by the same amount. 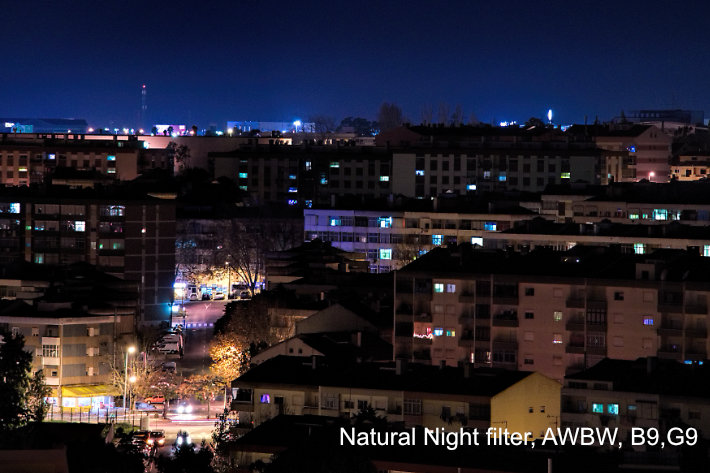 The whole process seems very similar to the one used for the night sky, but the introduction of AWB W here – because there is more white for the sensor to use as reference – opened another exploration path. In fact, the image using AWB W with the NiSi Natural Night filter and adjustment values of Blue 9 and Green 9 (B9,G9) offered a good final image from where I could move forward editing. Is it perfect? Probably not, as I feel that with so many light sources mixed, you’ll probably always end having to go through some local adjustments. But there is no doubt for me, at this moment, that the NiSi Natural Night filter does help to reduce different effects of light pollution, and that it does clean some of the skyglow that photographers find in many photos of the night sky taken close to cities.  If your photography is centered around these subjects, it might be a good solution to get a better initial image while on the field. This said, we’re talking about a filter that may not be needed in a not so distant future.

In fact, the the landscape is changing drastically when it comes to cityscapes, as the classic lighting of cities is changing. The low-pressure and high-pressure sodium highlights, responsible for much of the yellow cast we see in photographs, have been replaced in many cities and LEDs are appearing everywhere. Although there is some controversy about the effect LEDs – those now being used in most street lighting schemes – have on our health and wildlife, there is no doubt LEDs will be the type of light we will have to contend with, in a near future, when photographing at night. 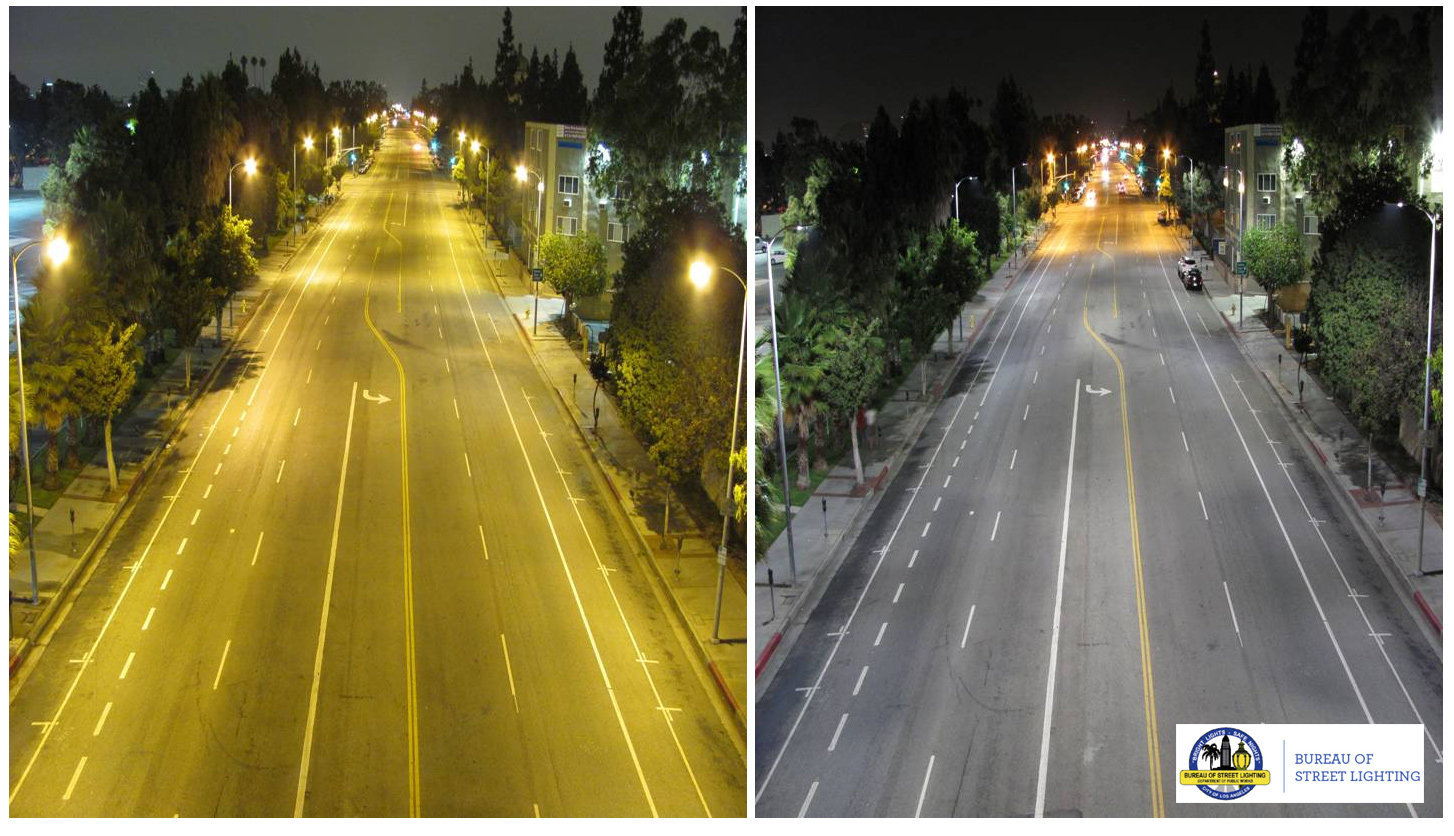 The night light is changing

If most of the mercury vapor, sodium and other types of lights go away, that will change drastically the way our cityscapes look, even without a filter. One such example was given by the Los Angeles Bureau of Street Lighting, through photographs that show areas of the city with the old and new light scheme. The LED lighting – see images) gives a more natural look, giving photographers and videographers a darker sky and, apparently, no skyglow.

One interesting development since the first LED lighting was introduced is that the initial 4000 Kelvin LEDs, which emit unseen blue light, are being changed… some places. According to the AMA – American Medical Association, these lights increase the risk of serious health conditions and are also not friendly to drivers, as they can impair nighttime driving vision. On the other hand organizations like IDA, International Dark-Sky Association, claim the excessive brightness of LED lights is also bad for humans and wildlife, besides not allowing us to appreciate the night sky close to cities. Apparently there is a compromise being made that makes everybody happy: light emitting diodes with no more than 3000 Kelvin, which give a softer, warmer light. Interestingly enough, these lights offer a colour temperature close to the one we are used to at home, from incandescent bulbs or modern LED lamps. 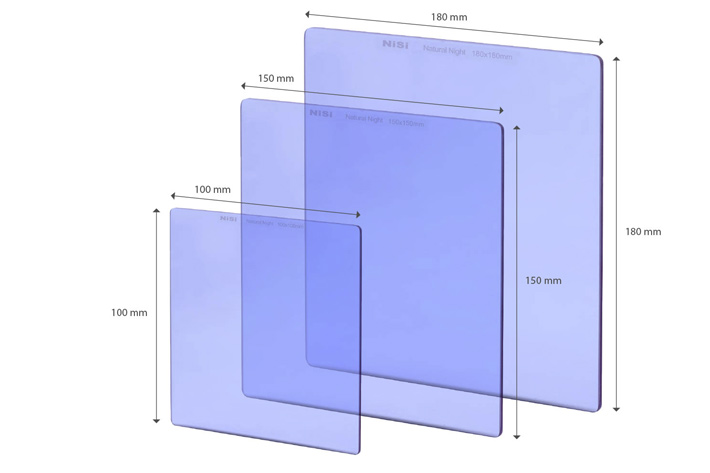 The introduction of a different type of lighting for cities means that the cityscapes will change drastically, and a new generation of photographers and videographers will have a whole new playground in terms of experimentation. Also, in terms of light pollution, it will introduce changes that mean one thing: the actual light pollution filters are going to be obsolete…

Before that happens, and in case you’re interested, the NiSi Natural Night filter is available in two formats, square and circular. The square format, to use with a filter holder, is available in 100, 150 and 180mm sizes, while the circular filters are available with 77 and 82mm diameters. I tried the circular version, using the Manfrotto Xume attachment system, which makes for a faster change or removal/placement of filters for testing purposes or for creative work.