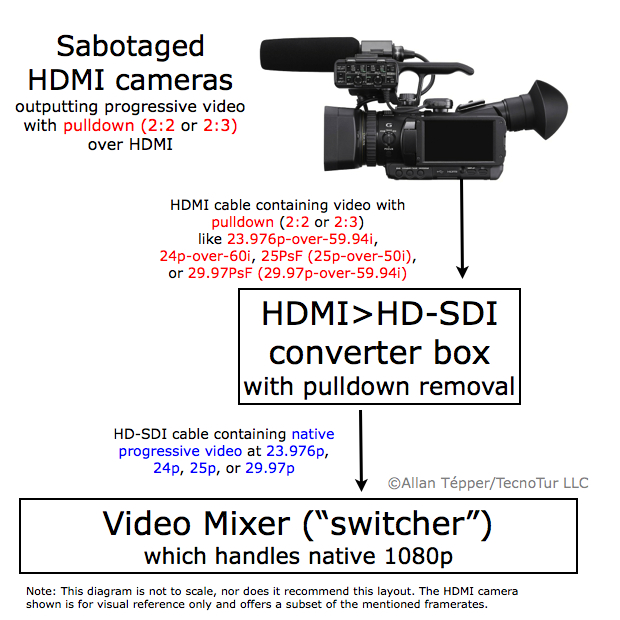 In prior articles, I have covered both the challenges and solutions for getting true native progressive video from HDMI cameras that have been sabotaged by their own manufacturers via 2:2 or 2:3 pulldown on their outputs for recording to an external 4:2:2 recorder with ProRes422 or DNxHD códecs. That left pending the impossible dream of using multiple sabotaged HDMI cameras in true native progressive mode with a video mixer (“switcher”) that can handle native progressive 1080p video at the popular framerates of 23.976p, 24p, 25p, and 29.97p. HDMI>HD-SDI converter boxes have existed for years from other manufacturers, but Átomos seems to be the first to include the key feature of pulldown removal in such a box to undo the sabotage, together with a built-in test generator and even a flashlight (torch)! Ahead is a first look at Átomos’ new Connect converters and their use in this application.

Mission statement for this article

Why most HD cameras still auto-sabotage themselves by outputting progressive video with nasty 2:2 or 2:3 pulldown over HDMI, despite native internal (or at least Benign PsF) recording?

As stated in my prior articles, although to my knowledge, the only camera manufacturer that has actually stated it publicly is Sony, the reason is probably the same for all of them: The HDMI camera manufacturers are extremely concerned about monitor compatibility, since not all HDMI monitors and HDTV sets can accept true progressive 1080p signals at their native framerate. Although Canon’s XA10 cameras can output 1080p-over-HDMI, it is not at the native framerate: It’s progressive 1080p23.976 or 1080p29.97 over 1080p59.94, or it’s 25p over 1080p50. I don’t know why HDMI camera manufacturers don’t handle this issue the way many Blu-ray players do: Many Blu-ray players offer a menu option to output native low framerate progressive 1080p over HDMI (and/or they negotiate via EDID). But (to my knowledge) only a couple of HDSLRs from Nikon actually output native low and medium framerate 1080p over HDMI. So we need to deal with the mess after the progressive signal has been “camouflaged” as interlaced 1080i over HDMI.

Although Sony went to great lengths to add progressive flags to their HDMI signal on several of the NXCAM HDMI outputs, to my knowledge, none of the current HDMI recorders, converters, or video mixers that have a pulldown removal feature is yet taking advantage of those flags. So far, the recorders (and now converters) that I know are ironically solving the problem a different way. In the case of the simpler 2:2 pulldown (25p over 50i, or 29.97p over 59.94i), they simply treat the 1080i signal as PsF when instructed to do so, and then encode and record as true progressive 25p or true progressive 29.97p. In the case of the more complex 23.976p over 59.94i (2:3), they are currently analyzing the video’s cadence to perform a reverse telecine.

The best solution to the camera manufacturer’s self-sabotage

You could certainly deal with this issue as Malignant PsF via software using the methods I have described in the PsF missing workflow series, but those only apply to 25p, 29.97p, and the not so popular 30.000p. The process would be much more complex with 23.976p or 24.000p, and the transitions you do with your video mixer would already have transitions made in an inappropriate cadence. Without a doubt, if you own (or choose to purchase) a video mixer that’s compatible with framerates of 23.976p, 24.000p, 25p, 29.97p, or 30.000p, the best thing to do is to remove the pulldown in a single device, while you simultaneously convert to HD-SDI or 3G-SDI… and that’s what Átomos has finally made possible!

Enter the Connect H2S from Átomos to save the day!

At NAB 2012, Átomos announced its new line of converters to complement their 4:2:2 recorders (the Ninja–2 and the Samurai). There are two models: the S2H (SDI>HDMI) and the H2S (HDMI>SDI), which is the one I’m primarily going to cover in this article. 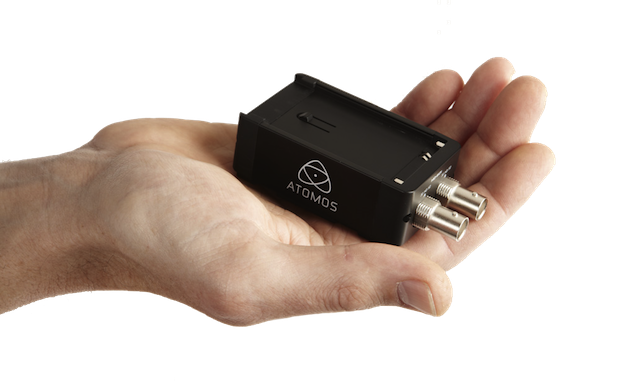 Jenny Pitts of Átomos tech support describes the S2H at NAB 2012. The H2S is very similarly sized and shaped but does the reverse conversion from HDMI>HD-SDI, and likewise can be powered by battery or included AC adapter, and likewise includes test patterns and a built-in flashlight (torch). YouTube video by GTM PICTURES.

As stated in the initial paragraph of this article with less detail, over the years, several manufacturers have offered converters from HDMI>SDI, including AJA, Blackmagic, Convergent Design (although they apparently now focus solely on recorders), and Datavideo. However, to my knowledge Átomos is the first to offer pulldown conversion built into such a converter. I have not yet had one in my hands or tested one, although Átomos has offered to send one for evaluation and review around the end of October 2012. In the meantime, here are the ways it will work, assuming you use a camera that offers your desired progressive framerate:

The H2S converter abbreviates the term Pull Down Removal into the initials PDR. According to the Átomos User Guide (which prefers to call 2:3 pulldown as 3:2 pulldown, which is fine): 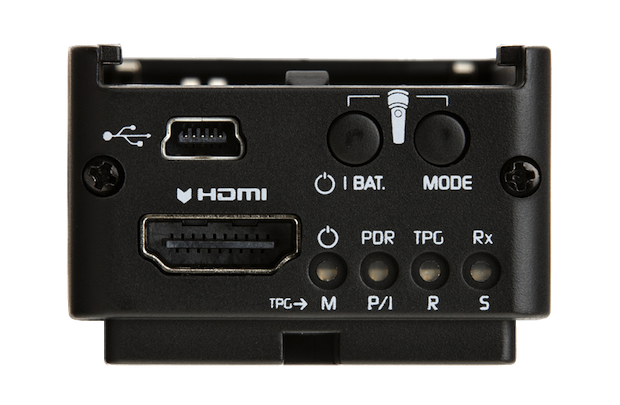 3:2 Pullldown removal must be calculated from a moving sequence of video. To aid obtaining 3:2 Pulldown lock, move the camera or wave your hand in front of it.

The User Guide also states that the PDR function de-activates itself if it receives a signal that is already native progressive, so the device will continue to work even if your camera manufacturer offers a firmware upgrade to offer native progressive over HDMI, or if you own one of the very few cameras that already offers it.

The H2S is scheduled to ship at the end of October 2012 for US$349/€249 which is quite competitive with other HDMI>SDI converters that are already on the market but lack pulldown removal. I expect to receive an evaluation unit and do tests with a few different cameras. To make sure you continue to see my upcoming articles, sign up to my mailing list here.