Due to the outbreak of coronavirus in the United States and abroad, NASCAR postponed race events through May 3, but starting this March, races will be held online. Drivers… start your computers! 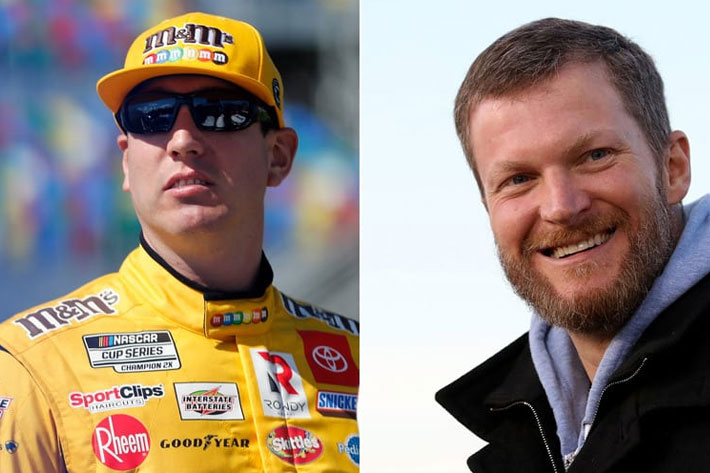 As COVID-19 puts a halt on all NASCAR races, many of the most popular drivers have agreed to move the races online, using an online racing simulation, iRacing.

NASCAR and iRacing announced Tuesday night the formation of the eNASCAR iRacing Pro Invitational Series, an exhibition esports series featuring many of the sports most talented and popular drivers. Drivers currently expected to participate include: Dale Earnhardt Jr., Kyle Busch, Denny Hamlin, Clint Bowyer, Kyle Larson and Christopher Bell. They will use computers, driving wheels and probably Virtual Reality headsets to do what they do best, only this time in a racing simulation.

It’s not just any racing simulation. iRacing is the ultimate global racing portal. Whether you want to experience a NASCAR Cup car, a World of Outlaws Sprint car, an open-wheel IndyCar, an Australian Supercar, an IMSA Prototype or Touring Car, or the ultimate: an FIA Grand Prix car, iRacing’s online racing simulations offer them all. All you need is a computer equipped with one or more USB ports, and a digital wheel/pedal, or gamepad backed by a high-speed Internet connection. 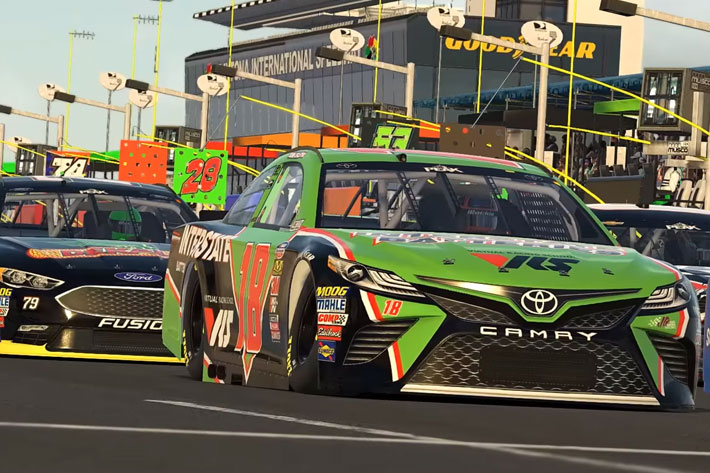 The simulation-style showcase will include a cross-section of competitors from the NASCAR Cup Series, NASCAR Xfinity Series, NASCAR Gander RV & Outdoors Truck Series and a group of NASCAR dignitaries. The racing simulation has been offering virtual racing for a long time,  offering a fun, inexpensive and highly-competitive way for race fans and gamers to break a sweat by braking hard at the apex, while overcoming head-to-head racing challenges usually reserved for professional racers. The difference this time is that some of the best professionals racers will sit behind the wheel, creating a new vision of NASCAR that audiences now being forced to stay home will be able to watch online.

The multi-week series will kick off Sunday at 1:30 p.m. ET on the virtual Homestead-Miami Speedway. The remaining race and broadcast details will be announced at a later date.

“Until we have cars back on track, the entire NASCAR community has aligned to provide our passionate fans with a unique, fun and competitive experience on race day,” said Ben Kennedy, NASCAR’s vice president of racing development. “Our long-time partners at iRacing offer an incredible product, and we are excited to see how many of our best drivers will stack up in the virtual domain of competitive racing.” 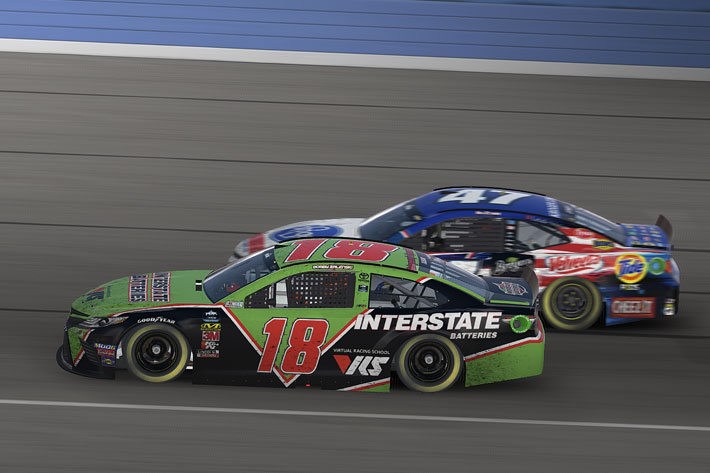 The eNASCAR iRacing Pro Invitational Series will provide racing entertainment for sports fans on the premier motorsports racing simulation platform, often used by NASCAR drivers to prepare for race events. In fact, many drivers use the racing simulation to train, as it offers everything from officially licensed car replicas engineered from the ground up in cooperation with real-world race teams, applying accurate mechanical and dynamic models to exact officially-sanctioned replicas of the world’s greatest racing circuits.

Watching any race in iRacing clearly demonstrates how real the simulation appears. While nothing beats seeing a live race, it’s not hard to believe, when watching some segments, that you’re watching a real race. My younger son has used iRacing for many years, and he has recently returned to the simulation, with the added immersion of a Virtual Reality headset. When I sit with him to watch the races on the monitor and see how his technique is improving, it’s easy to forget you’re just watching pixels moving on a screen, as it all seems so real.  We’ve discussed this many times, and you really have to see it to believe it! 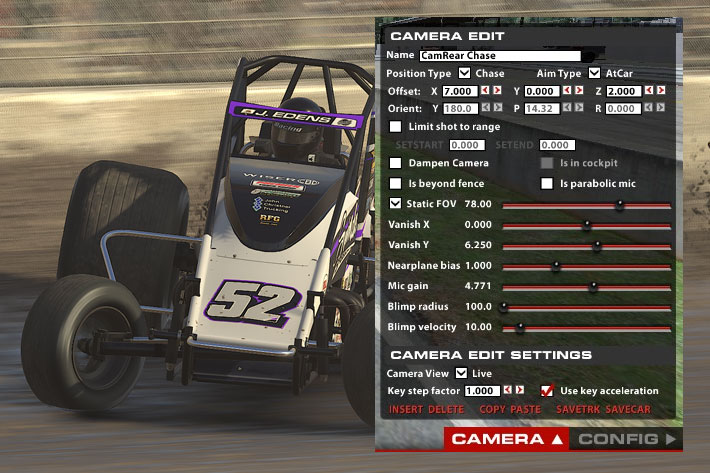 Broadcasting from inside a simulation

Now, there is a reason for this piece of news to appear here. The racing simulation has its own broadcasting channel called iRacing Live, which offers an experience akin to the one you’ll have on a TV broadcast. That’s what attracted me. With the real professional racers from NASCAR saying yes to the virtual challenge, it’s going to be an interesting show to watch. It also opens the door to better understand a world and occupation that will grow in the future: that of a live eSports broadcaster.

One such example is RaceSpot TV, a company formed in 2013 with the intention of pushing the boundaries of what was possible in Sim Racing broadcasting. Since then RaceSpot TV have become one of the world’s leading eSports content producers, with over 15 hours of high quality live broadcasts a week to a global audience. 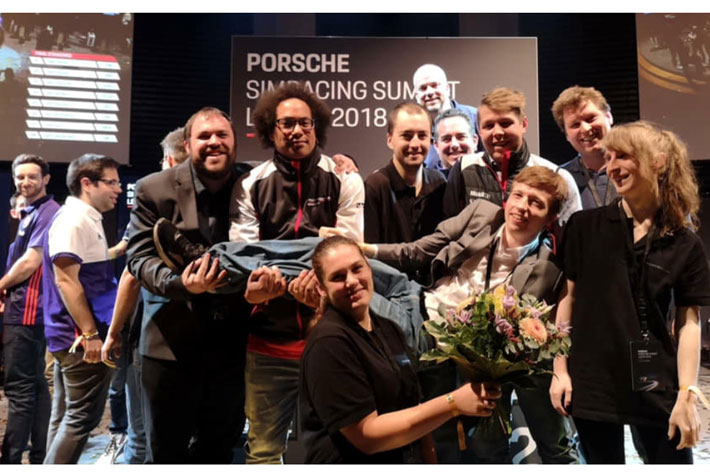 A new frontier for broadcasting

RaceSpot TV works with a diverse group of people from across the globe, including producers of live content, commentators, and eSport event hosts. The company believes that its job “is to be storytellers for some of the world’s biggest eSports moments, whilst ensuring we provide a recognisable motorsports product to viewers who may be new to the concept of competitive eSports. We invest heavily in every aspect of our product to ensure that every broadcast provides informative commentary, and lasting memories.” Just like any TV broadcast, I dare add!

NASCAR and iRacing have an unprecedented history in the esports space, currently in the 11th season of the longest-running officially sanctioned esports racing series, the eNASCAR Coca-Cola iRacing Series. It features 40 of the best sim racers in the world competing for more than $300,000, one of the richest payouts in esports racing competition. The elite series features NASCAR and professional esports teams, including those established by NASCAR Cup Series drivers William Byron, Austin Dillon and Hamlin.

Now, due to the unexpected situation created by COVID-19, the bond between NASCAR and iRacing gains a new meaning, as the real driver transfer to the virtual racing simulation for a different challenge. Maybe this is something you want to try, too, if you’re staying home for the near future. It’s a new experience, both to discover the joy and challenge of driving at NASCAR and other races, and to better understand how broadcasting is conquering new grounds.