On-camera recording devices, plus the end of tape? 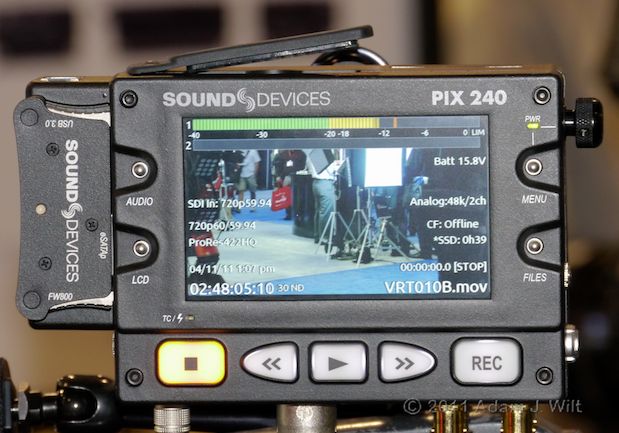 If NAB had an unofficial theme this year, it was “the year of compact on-camera digital recorders.” And the subtext? Suddenly, silently: ProRes everywhere.

I’ve got video coverage of two small camera-top recorders, the Sound Devices PIX and the Fast Forward Video Sidekick. The video shows the Sidekick’s features and interface pretty clearly, but I didn’t have as much interface detail on the PIX recorders. These devices use a selection of hard keys along with a side-mounted spinning knob to select menu items and options; in playback mode, the spinning knob serves as the jog/shuttle controller. 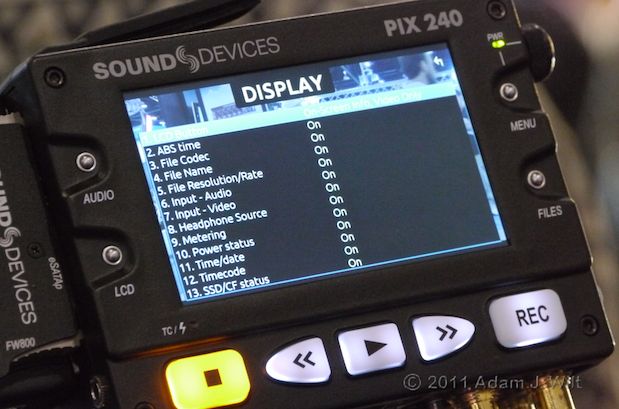 There plenty of display items to choose from. 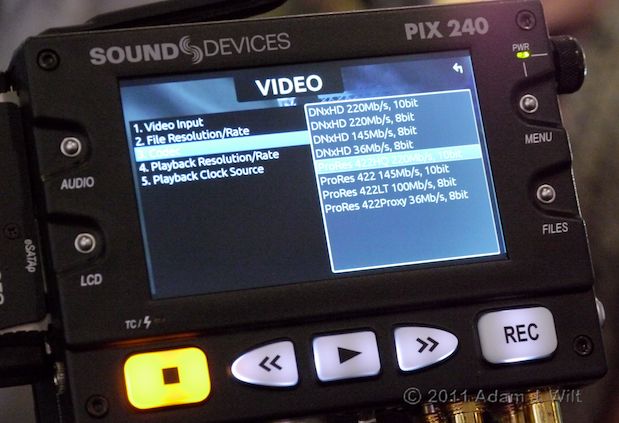 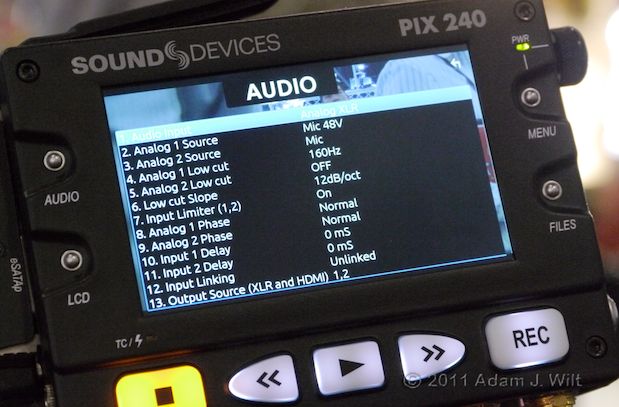 Its’s from Sound Devices, so you know you’ll have great audio options.

The Atomos Ninja ($1000, HDMI only, shipping now) and Samurai ($1500, SDI, shipping in a few months) got a lot of attention: low-cost ProRes recorders from former Blackmagic Design folks. They lack the flexibility of the PIX and the Sidekick in terms of inputs and I/O transcoding (they offer HDMI only, or SDI only), but they have a very clean interface design and simple operation. The Atomos units come as complete kits with batteries, charger, case, and a playback station; add the 2.5″ HDDs or SSDs of your choice. 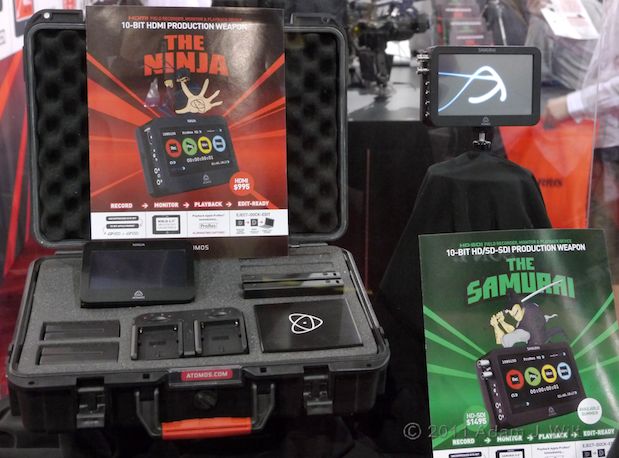 The Atomos Ninja comes completely equipped; the Samurai will, as well. 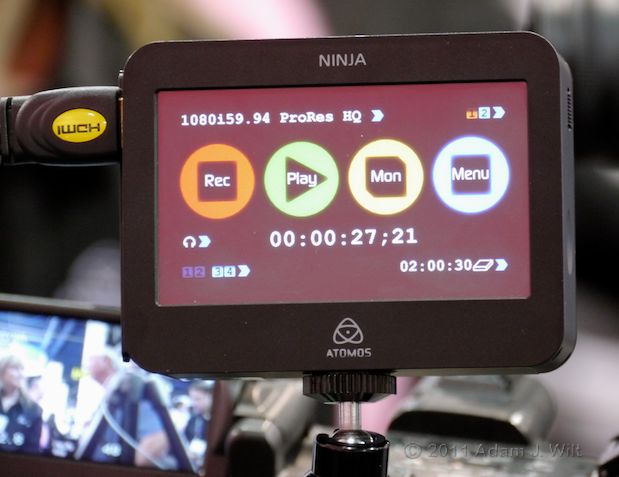 The Ninja has a simple, friendly touchscreen UI. 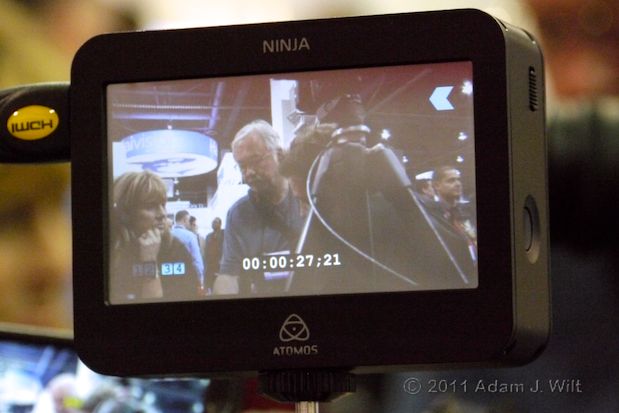 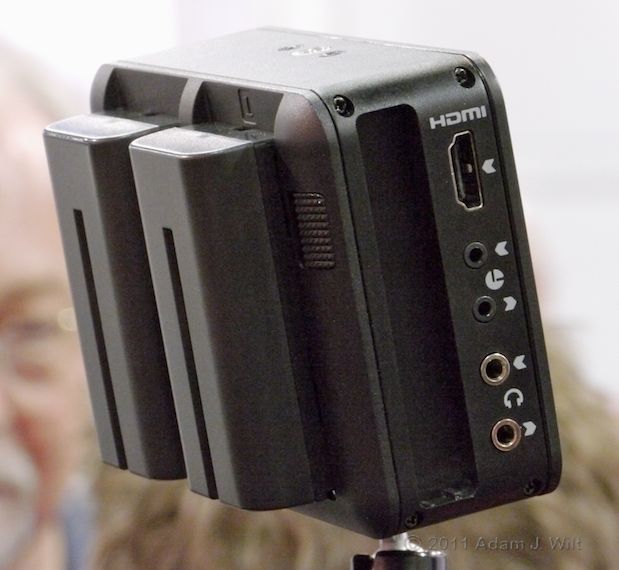 And while the Ninja is shipping (a rarity at this NAB, where the most common refrain was “shipping in June”), it’s by no means finished: playback is rudimentary and pixellated. The engineers are working on moving playback processing to a second, underutilized FPGA; fortunately the Atomos boxes are easily field-updatable.

Of course, existing players in the camera-top recorder market haven’t been sitting idly by. Cinedeck (which has a nasty, CPU-gobbling, all-Flash-all-the-time website) has added Avid’s DNxHD and Apple’s ProRes codecs to their “extremely capable” recorders. 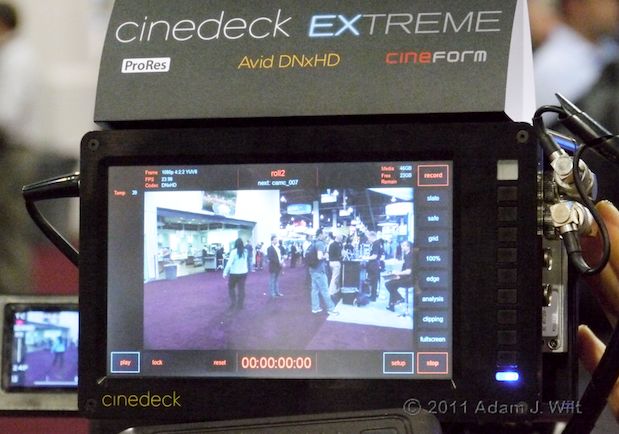 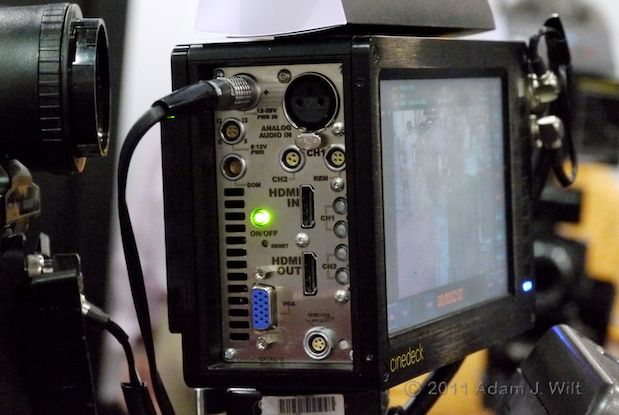 HDMI, VGA, analog audio, power, and TC this side; SDI on the other side.

AJA’s Ki Pro and Ki Pro Mini recorders, writing ProRes to HDDs, SSDs, and CF cards, were in widespread evidence. However, there is still no evidence that anyone has figured out where the “Ki Pro” name comes from. 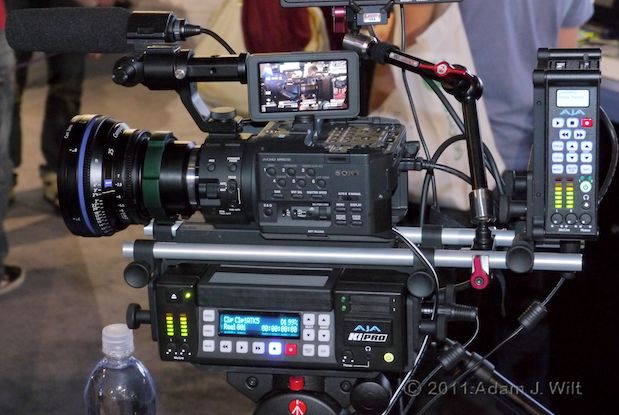 Redundancy is good: this NEX-FS100 has both a Ki Pro and a Ki Pro Mini recorder.

Every one of the aforementioned recorders offers ProRes as a codec; on a couple, ProRes is the only codec available. Earlier this year (or late last year?) Apple apparently and with little fanfare opened up ProRes encode licensing to a broad array of third parties—not just the recorder makers I’m talking about here, but makers of transcoders, grid-based encoding systems, and so on. ProRes is rapidly becoming a de facto standard codec, even on Windows-based systems. As an FCP user, I appreciate its wider acceptance and availability, but I worry that ProRes remains a closed and opaque compression technology. I do wish Apple would submit ProRes to SMPTE… but I’m not holding my breath.

Is tape dead? The Japan earthquake and tsunami put Sony’s sole HDCAM-SR plant out of commission, and tape stocks are “constrained”, accelerating the transition to non-tape-based recording.

DVCPRO on the left, LTO on the right: (Video)Tape is dead! Long live the (LTO) Tape!

FOR.A (better known in the USA for their HD switchers / vision mixers and their transcoding timebase correctors) has two “videotape” recorders with standard video I/O connectors and VTR-style front panel controls, but they record to LTO-5 tape instead of video tape. The LTR-100HS records MPEG-2 while the LTR-120HS uses Panasonic’s AVC-Intra and DVCPRO codecs; both wrap their content in MXF. 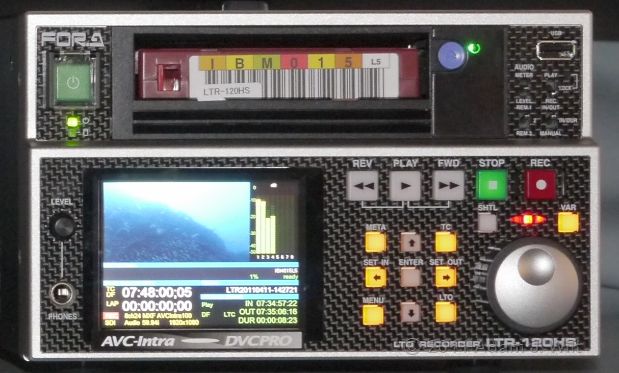 And even for those who have moved entirely away from tape—including Panasonic, ironically enough—the human-friendly VTR interface retains its appeal, even if the jog/shuttle wheel has been replaced with a four-way controller: 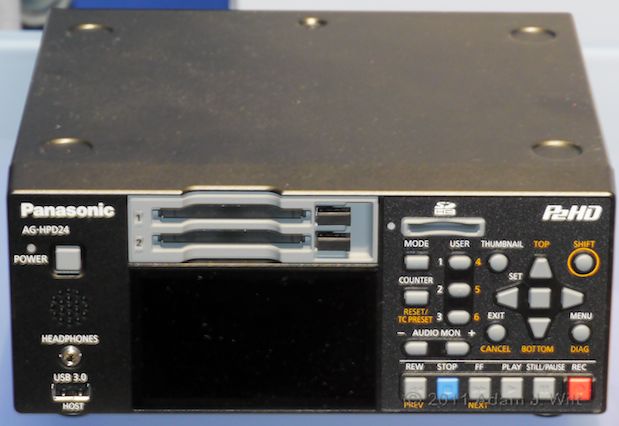 Another big splash was Blackmagic Design’s introduction of the Hyperdeck Shuttle and Studio recorders. These dump HDMI or SDI video to uncompressed QuickTime files on SSDs—just as 2.5″ SSDs are getting fast enough to sustain the required throughput. 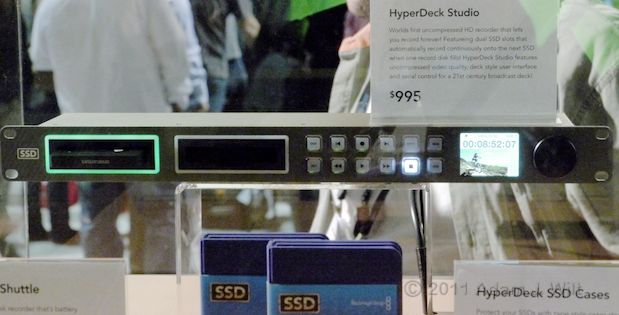 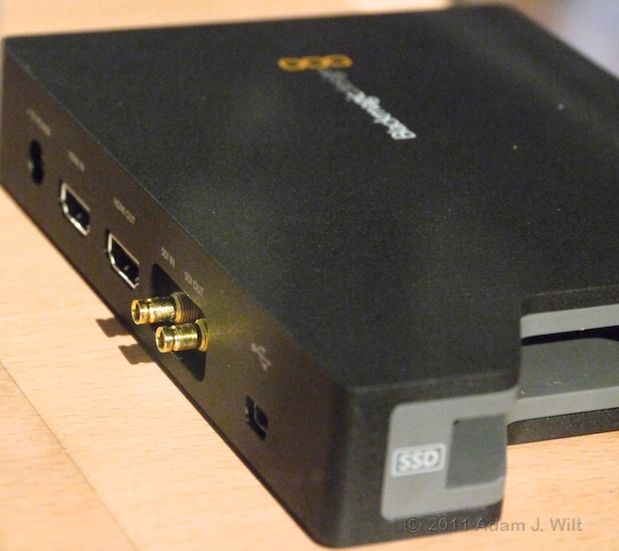 The $345 HyperDeck Shuttle: where have we seen those SDI connectors before? On the RED ONE; they’re really popular there.

Seriously, at those prices, it’s hard to imagine recording on anything else… were it not for the fact that uncompressed files are really big, and they get unwieldy if you’re shooting a lot of footage. You’re going to burn through SSDs at a frightening rate, and your archiving storage will similarly skyrocket…

…at which point, you have to ask: how are you going to archive all this footage, however it’s recorded? 1 Beyond has a couple of answers; the SuprDupr is a portable duplication/offload system comprised of a Windows computer in the base and your choice of configure-to-order media “slices” stacked on top, each of which contains a reader or writer for some useful media format: removable HDDs or SSDs, LTO-5 tapes, SxS cards, CF cards, REDMAGs, etc.

1 Beyond’s Wrangler software automatically checksums, dupes, backs up, and verifies attached media, making the SuprDupr as hands-off and goof-proof as possible. Oh, and it runs off of batteries, too, for field use.

The FlexVTR Archive Recorder is a rackmounted PC-based VTR replacement, capturing video in Cineform, uncompressed, and other formats to LTO-5 tape. Cleverly, it uses disk arrays as a buffer mechanism; if you’re recording something a bit too hefty for LTO-5 tape to ingest in real time, FlexVTR will buffer on disk and stream off to LTO as fast as LTO allows.