More goodies from the Sunday before the show.

An SRW-9000 at BandPro with a Zeiss DigiZoom.

Both BandPro and Sony had prototypes of the new SRW-9000 HDCAM-SR camcorder to show, as well as the new PDW-F800 XDCAM HD camcorder. But first, those Zeiss Compact Primes I was rabbiting on about… 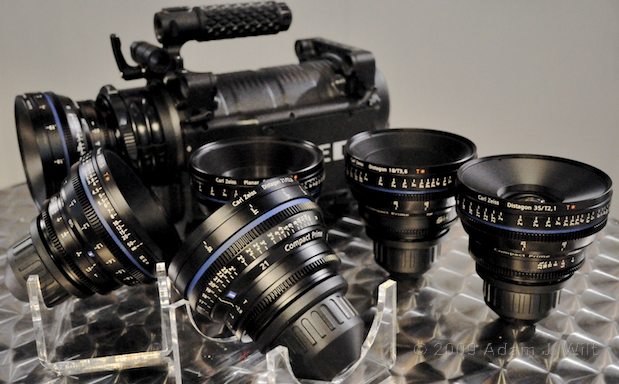 Zeiss Compact Primes at BandPro, with a Red One.

BandPro’s Michael Bravin and Jim Hegadorn kindly fetched out their set of the new Zeiss Compact Primes for me to photograph. These are a set of seven matched PL-mount primes, based on Zeiss’s well-regarded ZF-series still camera lenses, reworked with cine lens housings. All are 80mm long, 114mm across their fronts, and all within 10% of 1 kg in mass:

All the lenses stop down to T22, using a 14-blade iris for a smooth and pleasing bokeh. As the list shows, the max apertures vary a bit between the lenses, but also consider that the set is likely to sell for around US$40,000, or roughly US$6,000 per lens—a bit under half the price to the corresponding Ultra Primes. 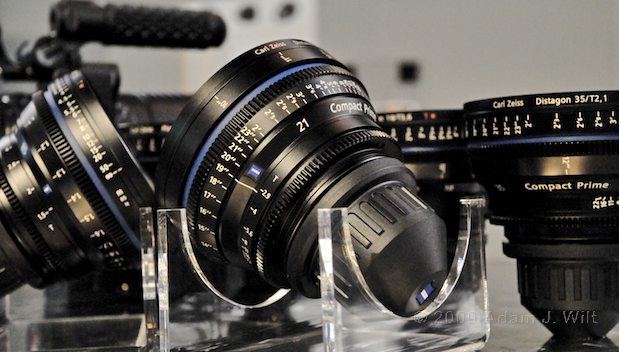 While I obviously didn’t have the opportunity to evaluate the Compact Primes optically, I did observe that the mechanical fit, finish, and operation of the focus and iris rings are all up to Zeiss’s typical high standards; all the actions were silky smooth and perfectly damped.

The Sony F23 and F35 are excellent digital cine cameras, but they’re not especially usable by one-man crews. Sony has managed to combine the front end of the 2/3″ F23 with the guts of the SRW-1 recorder into a one-piece camcorder, the SRW-9000.

An SRW-9000 at BandPro with a Zeiss DigiZoom.

It’s a hefty puppy (around 17 pounds, comparable to an F900/3) but a lot lighter than an F23 with an SRW-1 docked to it. Power consumption is around 57 watts, roughly half that for the F23/SRW-1 combo. With a DigiZoom on the front, it balances nicely on the shoulder; with a DigiPrime, it’s slightly back-heavy.

Sony has designed this camera for episodics and other “film-style” television productions, primarily shooting Rec.709 in full-resolution, 10-bit, 4:2:2 color (e.g. plain old TV); shows that might currently be shooting 8-bit, 1440×1080 HDCAM with F900s but want to move into F23 territory were it not for the bulk, expense and complexity (prices for the SRW-9000 aren’t firmed up, but are supposed to be substantially less than a loaded F23 and SRW-1 combo). The 9000 will have option cards for 4:4:4 recording, 60fps overcrank (the base camera will overcrank to 48fps), and S-Log capture. 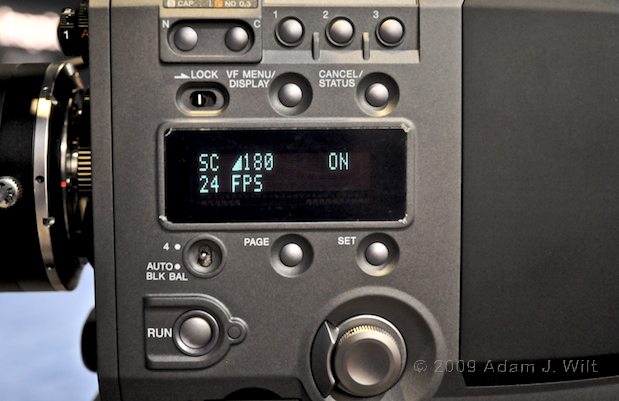 The operator’s panel, similar to that on an F23. 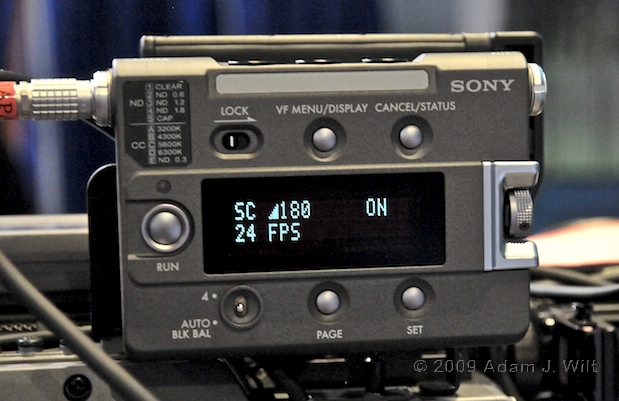 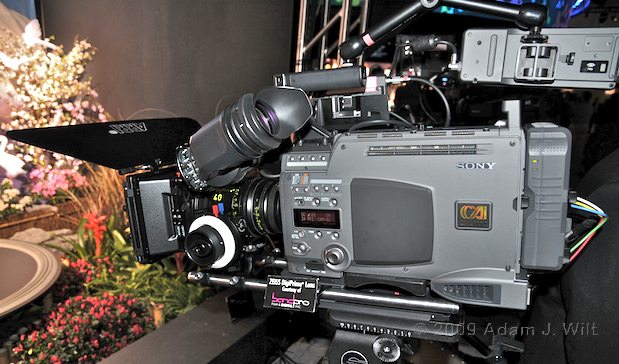 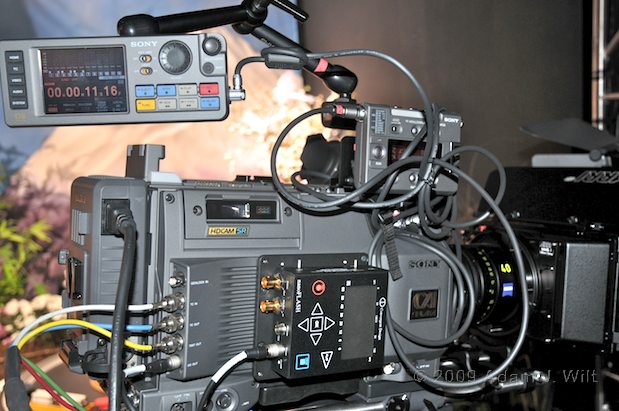 The flip side of that camera, with deck control on a cine arm and a nanoFLASH recorder.

This NAB sees the debut of Mike Schell’s nanoFLASH recorder from Convergent Design. The nanoFLASH, appropriately enough, uses a Sony XDCAM codec to convert HD-SDI into long-GOP, 4:2:2 MPEG-2 at data rates up to 50mbps, recording it to CF cards. Its application here on the SRW-900 is as a proxy-video recorder (although, conceivably, a poor bloke reeling from the shock of purchasing an SRW-9000 and a nice lens or two could be forgiven from balking at the further expenses of SR tapes, and might be tempted by the low cost of reusable CF cards instead!).

The SRW-9000, big as it is, is still substantially more compact and shoulder-friendly than the bulky F23/SRW-1 combo. 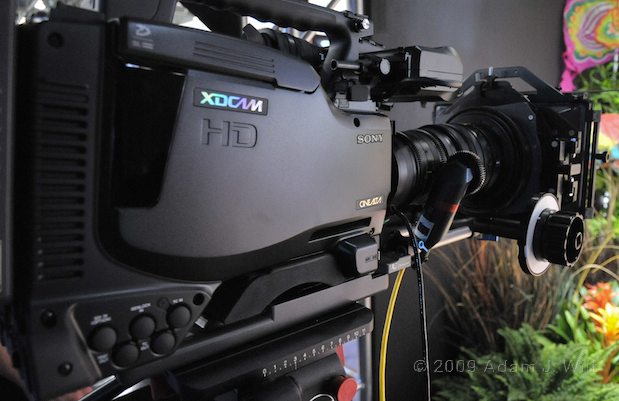 The back side of a PDW-F800, which looks just like a PDW-700 save for the CineAlta badge. 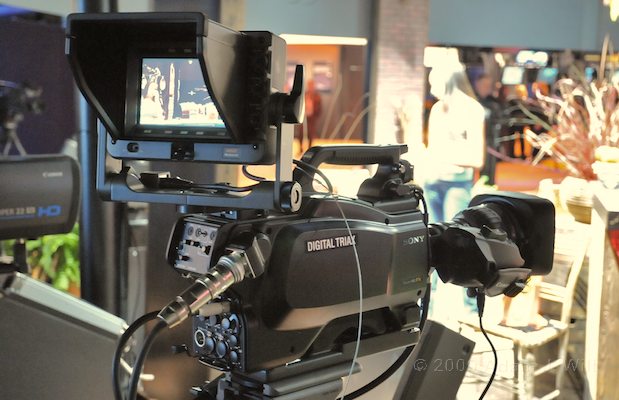 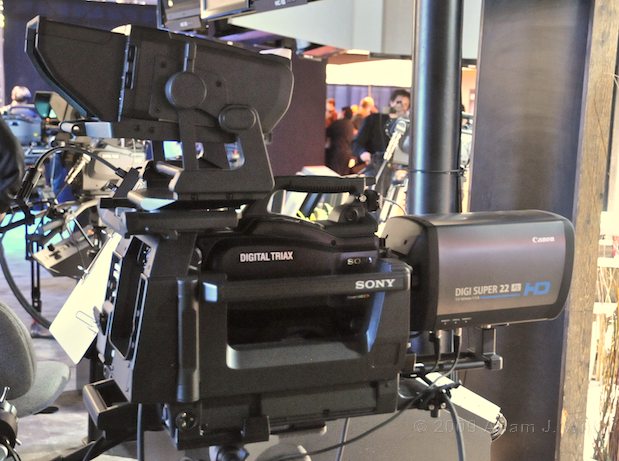 Another HSC-300 with a full sled and a short box lens.

And finally (for tonight): 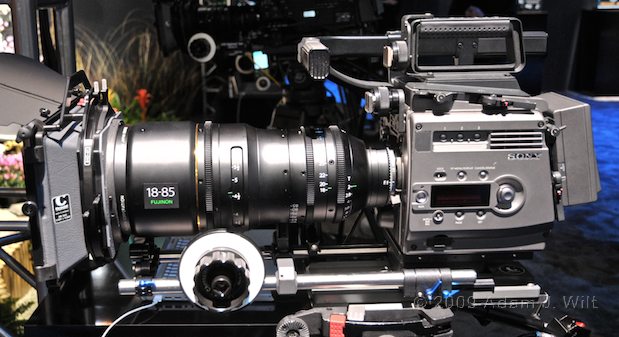 Here was a stripped and lonely F35, sitting off to the side of the main digital cine booth at Sony, and it had the new Fujinon 18-85mm PL-mount zoom on it. Looked pretty nice; I hope to see one of these lenses in action during the show.