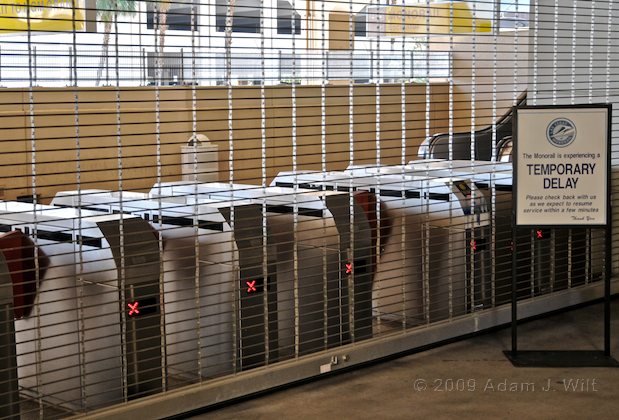 I get up after a solid and refreshing four hours of sleep and set off for the Convention Center. After threading my way through the corridor of shops at the MGM Grand enroute to the monorail station (almost nowhere in this town can one gain access to the monorail without running the gauntlet of casino-based commerce), I find the access gates down, the customer service outlet closed, and a sign saying “Temporary Delay”.

I walked another fourteen miles (it seemed) through the smoky, noisy, casino to the north entrance to the monorail station. There, at least, there was a fellow warning people off: “we think we might be running by noon.” After another trek to where the NAB shuttle buses picked up, I saw a line of commuters about two buses deep, sweltering in the heat. I retraced my steps to see about a cab, but the cab lines were longer than Disneyland ride lines (if the recession has thinned the ranks of visitors to Las Vegas, it must had decimated the cabs at least as severely; there were no quick rides to be had). I wandered back to catch the next shuttle bus, which arrived as I walked out the door, and I finally arrived at the Convention center an hour and fifteen minutes after I left my hotel room (when the monorail runs, it’s “only” a 30-40 minute trip).

Later in the day, a bunch of us SF bay area filmmaker types were gathered down by the AirSeaLand booth. Steadicam operator and trainer Kevin Braband tells us that when he took the monorail earlier, just before it closed down, the platform was covered by swarms of crickets, clustered so thickly that hey crunched under foot as he walked. Every station he passed through had crickets swarming the decks.

Afterwards, as we walked to the Peppermill for the CML gathering, we encountered a locust meandering though a parking lot. Was this one of the crickets that Kevin was referring to?

A Las Vegas locust lounging on the pavement today.

We may never know: as of midnight, Google isn’t returning links to any stories about a Nevada town brought to its knees by rampaging insect hordes.

Even so: cool stuff at Panasonic, JVC, Angenieux, Arri, Abel Sachtler, and many others—too much to write intelligently about in the wee hours of the morning on four hours of sleep. I’ll have to defer things to Thursday evening; Wednesday night I’ll be at the reduser.net party after hours, and out of radio range. Thursday I head home and try to make sense of everything I’ve seen, and I’ll catch up on my reports then. Stay tuned…