A couple of notes from the Director of Photography Workshop

The calm before the storm: the Las Vegas Convention Center on Saturday evening.

NAB holds several pre-show conferences; I arrived midafternoon on Saturday and sat in on two presentations in the Director of Photography Workshop, one on Red, and one on the Arri D-21.

Red Digital Cinema Camera Company’s Ted Schilowitz gave an update on Red’s current and future plans. If you’ve been following the saga over on http://red.com/ or http://reduser.net/ there wasn’t anything new or unexpected; The Epic and Scarlet cameras are still on track for Summer/Fall 2009 or 2010 releases, depending on model… but Ted emphasized that anything and everything is subject to change.

Ted didn’t show any radical new hardware; he just brought a box-stock Red One with 18-50 zoom, EVF, and carbon-fiber rods. But he did show some images of the proposed new gear (which you can find on red.com by following the Epic and Scarlet links); here’s a small sample I shot off-screen: 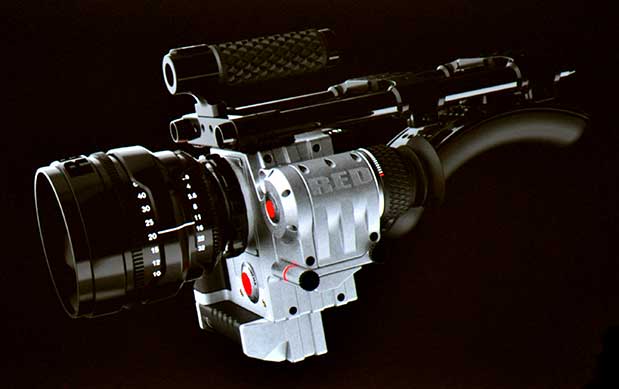 Possible configuration of an Epic (or Scarlet) with various accessories. 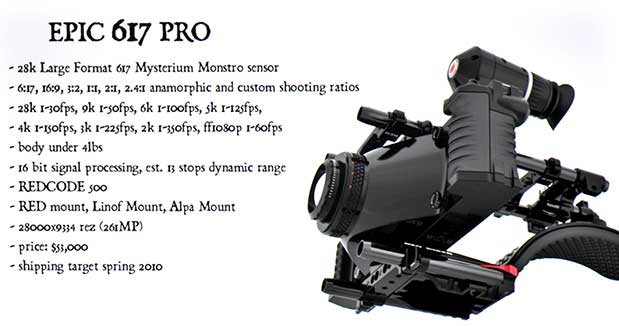 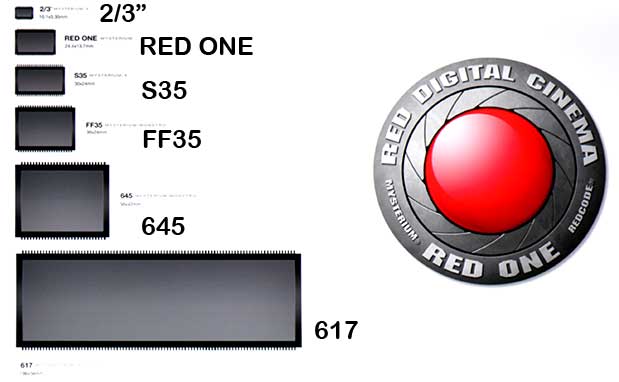 Relative sizes of the sensors Red expects to ship (I’ve added large-text annotations as the slide may not be very readable at 619 pixels across).

Ted said that the key to understanding the Red cams was to think of them as digital still cameras (Bayer-mask CMOS sensors, raw data recording, 12 Megapixel resolution [for Red One]) that just happen to record motion pictures. If you think about them as fancy video cameras, you’ll constantly be fighting misconceptions about how to get the best out of them.

Ted screened a variety of demo clips collected from Red productions worldwide, using an HDCAM-SR deck hooked up to a Christie 12K cine projector. What can I say? It all looked fine. Once in a while some highlights were a bit flatter than I might expect had the clips been shot on film, but there were plenty of shots of welders, fires, fireworks, and other overly-bright things that the Red One handled with aplomb.

Arri’s Bob Lovell updated the workshop on the status of Arri’s digital cine camera offering, the D-21. The D-21, which has been out about a year, follows on the footsteps of 2003’s D-20; indeed, Arri takes D-20s back and rebuilds them into D-21s, with substantial internal upgrades. The Arri cams use a 35mm-sized 4×3 sensor behind a PL mount lens; 16×9 is obtained through cropping, but widescreen is normally shot using anamorphic lenses, like the 85mm Hawk anamorphic fitted to Arri’s demo camera. 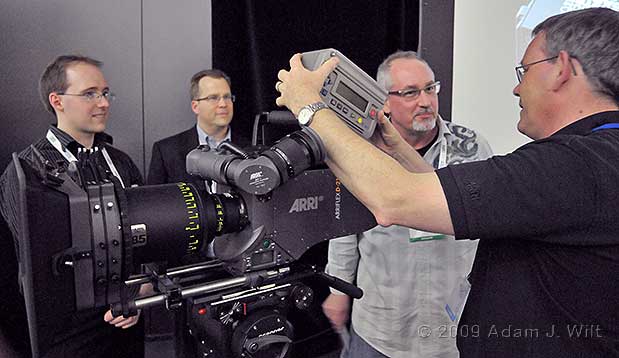 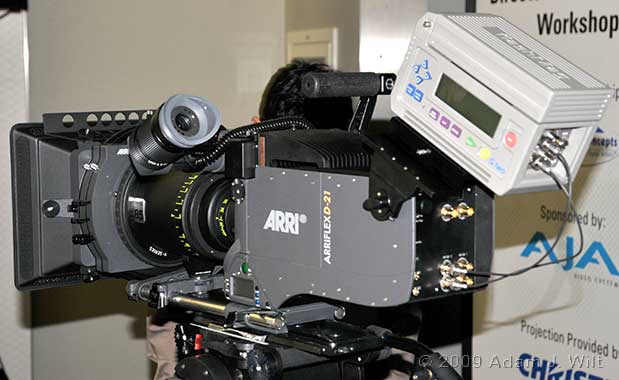 We previously saw this recorder at the HPA Tech Retreat in February.

The D-21 uses a mirror shutter and an optical viewfinder, just like a film camera. Like a film camera, it can be set up with no power applied. Bob also noted that the mirror gives the D-21 the most film-like motion portrayal possible, as the sensor gets exposed exactly the way a frame of film would: no matter whether the sensor uses a global or rolling electronic shutter, the mirror reveals and then covers the face of the sensor just as the corresponding shutter on an Arri film cam would reveal and cover a frame of film.

Bob said that the quality of digital is ever improving, but that film isn’t dead yet: after 30 years in the industry, he’s heard enough reports about the imminent death of film to be skeptical. Today, film is still the winner in absolute image quality, and Bob expects that to be the case for at least the next five years.

Bob also showed some demo clips from the D-20/D-21. Like the clips from the Red One, they all looked just fine. There were a couple of sequences intercutting D-21 footage with film footage shot with an Arri 235; they intercut seamlessly.

Are we at the point with digital cinema, yet, where we can agree that It Just Works? 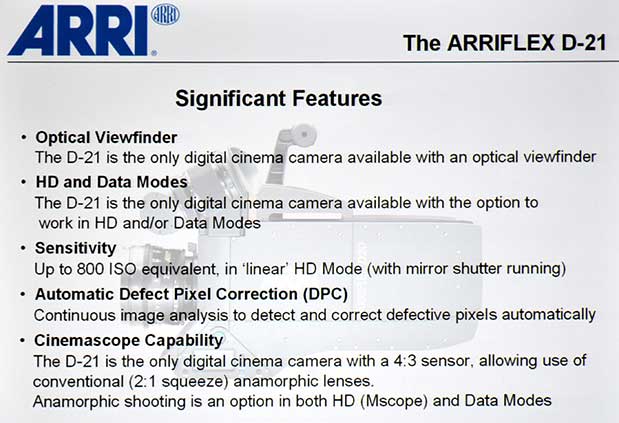 With the demise of Dalsa, the D21 is now the only digital cinema camera with an optical viewfinder. 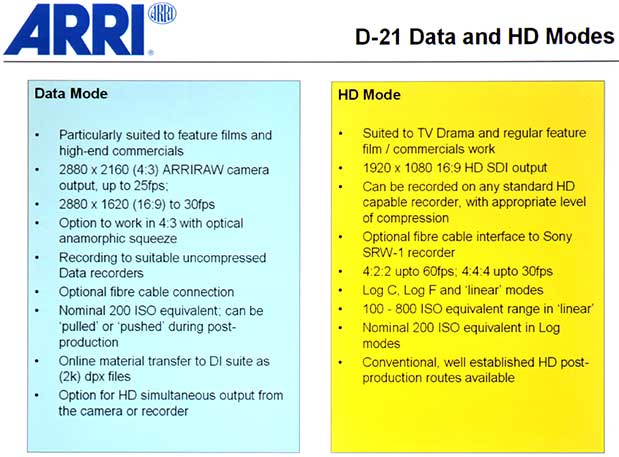 The raw, uncompressed Bayer-mask image is recorded on an S.two, SRW-1, or other high-data-rate recorder, and debayered in post to yield sharp, alias-free 2K DPX files. Gary mentioned that the real-time preview output applies a random, changing rough debayer, and as a result to live images from the camera have an even more film-like texture, as the randomness both adds a slight “grain” to the image and also causes color handling to roll off in a more filmlike manner. 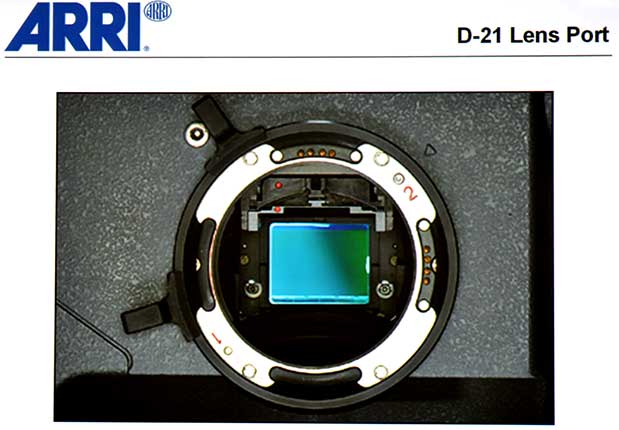 The Arri’s 4×3 sensor lurks behind its IR and optical low-pass filters.

The D-21 can be thought of as an Arri film camera with the film transport swapped out for a CMOS sensor and its associated electronics. In terms of controls, viewfinding, and operation, it’s much like any other modern Arriflex.