We received our first RED ONE back from the Mysterium-X upgrade, so without further ado, I slapped it on a tripod and compared it to a RED ONE with the original Mysterium sensor.

However, I did not perform black shading on either camera before starting; that may turn out to be important in interpreting what I saw!

I set up a selection of test targets and lit them with a pair of Kinoflo Diva-lite 400s with daylight tubes. I dialed in a brightness level that my meter said was 1/24 sec, f/8 at ISO 320.

I then recorded 11 clips with each camera, from a nominal 4 stops overexposed to 6 stops underexposed, based on that initial meter reading. I varied shutter speed and iris to manipulate exposure; I didn’t use ND filters.

I took all the clips into REDCINE-X build 252 for Mac; they ranged from blown-out white at +4 stops to deep in the murk at -6 stops. I used the default settings of REDcolor color space and REDgamma tonal scaling.

I graded the nominally-correct Mysterium shot to put the midgrays roughly where they should be: that required a one-stop boost, which I did with FLUT +1. An integer change in FLUT level is the same as a doubling or halving of ISO rating, so in essence I was grading the clip “open” a stop as if I had rated the camera at ISO 160; and indeed, the “+1 stop” clip used FLUT 0 to get the same levels. This matches most people’s observation that they need to shoot the original Mysterium about a stop slower (or “opener”) than the nominal rating to get the expected brightness levels.

I went through the rest of the clips for the Mysterium camera and set the FLUT compensation “by the numbers” to correct them all back to the same level. When I say “by the numbers”, that means I tweaked each shot by bumping FLUT up or down by the same number of stops as that shot was under- or overexposed, rather than adjusting the shot to match according to the histogram or the level readouts.

Then, I applied the same tweaks to every Mysterium-X clip that I had done to the corresponding Mysterium clip. Thus both the M and M-X clips shot at +1 stop got no exposure correction of any kind; both at +/-0 got FLUT +1, etc.

Here’s what I got, running from the most overexposed to the most underexposed clip:

Again, the same sequence, this time in 1:1 closeup, so you can see how the noise levels compare without the noise-reduction effect of scaling the image down:

A reminder: these clips were scaled down 2x from the 4k HD originals; if you were to view the 4K original, the noise would be slightly more prominent. I chose 4K HD capture with HD output as a typical use case, and to better match up with some other tests I’m working on.

1) At the same nominal rating, Mysterium-X looks like it’s about half a stop faster than the original Mysterium.

3) M-X clipped sooner in this test, but that’s probably due to its higher sensitivity. Testing for equal levels (using the false-color meter in the RED EVF), instead of using an external meter and testing equal exposures, may eliminate this.

4) M-X looks roughly two stops deeper into the shadows before suffering the same mount of noise. Put another way, you could shoot two stops faster —ISO 1280—on M-X than on M, and still have the same noise margin. If you split the difference, to gain more headroom and more shadow detail, you could shoot around ISO 640; RED’s default rating for the M-X is ISO 800, pretty darned close.

5) There are green and magenta color casts in the M-X’s underexposed clips that may be due to a lack of a black shading calibration.

6) The soft-shoulder rolloff of the new “color science” in build 30 doesn’t prevent color casts in blown-out highlights (but there’s still the DRX control in REDCINE-X to clear them up).

I did another, quick test, setting both cameras at “ISO 320” and setting their aperture using the false-color exposure meter in the EVF, dialing in the green 18% indicator on the 18% gray card: 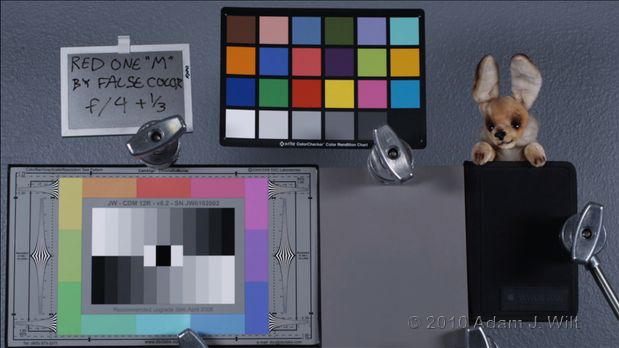 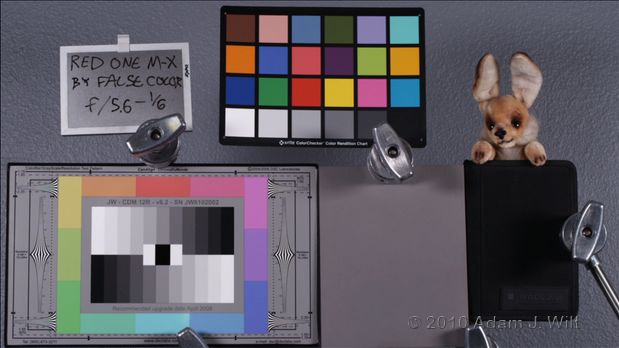 Indeed, the M-X sensor came in half a stop faster than the M sensor did.

You’ll also see the difference in the default color balances of the two cameras. It’s easily fixed in REDCINE, along with the colored highlights; here are the two +4 stop clips from both cameras, with the grays white-balanced and DRX used to clean up the highlights:

I did another pass through the clips, taking a white balance reading inside REDCINE-X from the DCS Labs CDM chart’s midgray in the nominally correct exposure for each sensor, and applying it to all the clips from that sensor. I then used DRX at a setting of 1.0 to eliminate the color casts from the highlights in the three most overexposed clips from each camera. The results are on YouTube (there’s something weird about YouTube’s processing—even the 1080p version has aliasing artifacts not present in the uploaded 1080p original) and there’s a 900-pixel-wide Quicktime version here on PVC, too.

My next step involves running black shading on both cameras, and running equal-level tests (same brightness in false-color metering, not necessarily same f/stop and shutter speed) through a broad range of exposures. That should compensate for the apparent sensitivity difference; may clear up the color casts in the M-X’s shadows; and better define the usable range of exposures between clipping in overexposed highlights and losing the signal in noisy shadows. Stay tuned for Part 2…

16 CFR Part 255 Disclosure
No material connection exists between me and RED, other than as a customer. My employer, Meets The Eye LLC, purchased three RED ONEs two years ago on my recommendation, and we have since purchased two M-X upgrades (soon to be three), three RED ROCKET hardware decoders, two 18-85mm zoom lenses, and a selection of accessories. I do not personally own any RED products nor do I have any financial interest in the company.