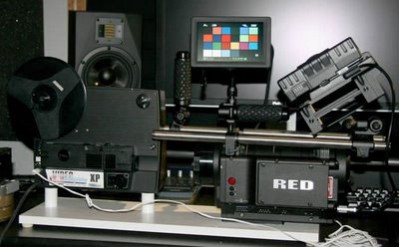 Like this site needed just one more RED post. While perusing one of my favorite sites today, engadget, I came across this article about RED being used as a Telecine:

As if the much-hyped RED ONE camera didn’t have enough going for it already, it looks like it could soon be put to use for a slightly unexpected but most welcome task: capturing Super 8 film. That’s apparently possible thanks to what’s described as a “pre-prototype” rig that employs a RED ONE camera and a Moviestuff Workprinter XP system which, thanks to a direct interface to the RED’s GPI input, should allow you to do up 30 single frame captures per second in the RED’s 4K mode. As the On Super 8 blog points out, however, there’s still some “optical wizardry” needed to sit between the RED and the workprinter, but we’re guessing those Super 8 die-hards should be able to take care of that little detail before too long.

When working as a one-man band, you often need to take on all aspects...