A few months ago, I put together the ultimate field monitor — for my purposes, anyway. I’m so happy with it that I find myself talking it up to clients, fellow shooters, and now to you, dear Reader.

All these features make for a very versatile monitor. Being able to run a big monitor for hours without plugging it into a wall is extremely liberating. It makes getting ready for new setups much quicker and also cuts down time spent blocking and lighting. On small jobs, I constantly walk the monitor around to each light on my set to tune it, scrim it, flag it diffuse it, dim it, etc., instead of running back and forth between the light and video village. Showing two angles at once — without additional hardware like a splitter — is also really convenient for the dual camera shoots that I do frequently these days. It’s especially useful for getting eye lines matched (or sufficiently different, if that’s the goal) in interviews.

Cost-wise, my rig isn’t exactly cheap — with two wireless angles, the damage can come close to $6000! But chances are, you already have some components on hand (like a big battery, or a wireless transmitter/receiver), so the financials aren’t likely to be quite so painful. Regardless, the monitor speeds up every job as well as impressing clients, so it’s worth the splurge for me.


Here’s how I put the monitor rig together… 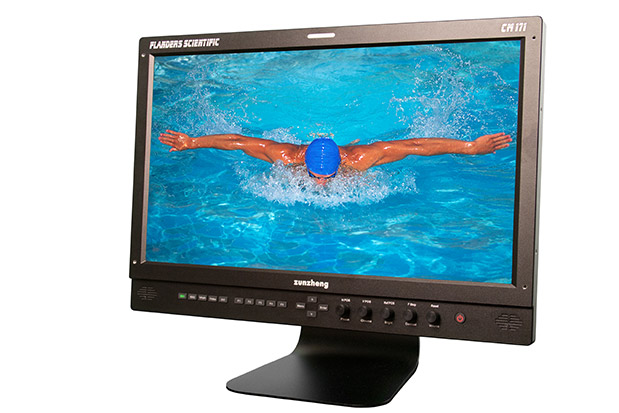 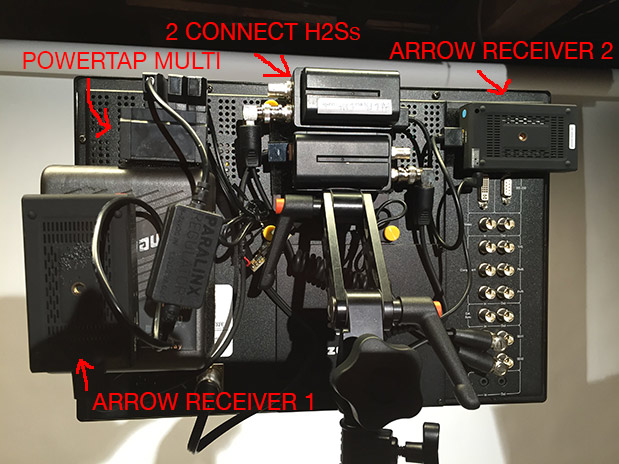 My “rig” isn't so pretty from the backside, but it fits a remarkable amount of add-on gear, mostly attached via velcro. 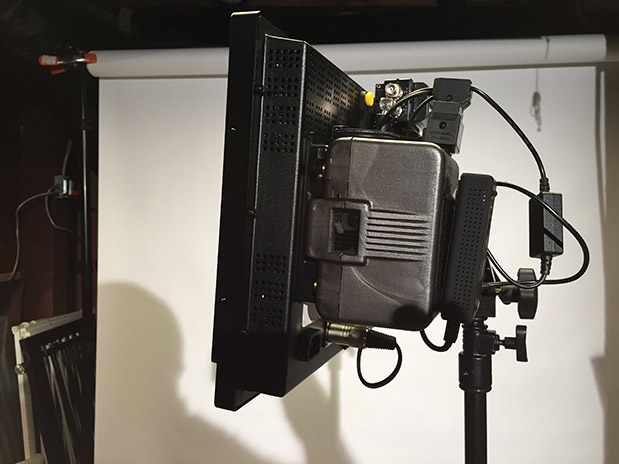 From the side, the monitor rig is about 7.5 inches deep—eneough to still fit into the Flanders small soft case.

You can order the Flanders with a streamlined light-stand mount ($295), as well as an Anton Bauer or V mount battery back ($195). You can also order it with a clever soft case that keeps the weight down, but also features a built-in sun hood. Indoors, I usually just take the monitor out of the soft case, but if we’re shooting outside, I’ll leave it strapped into the case, mount the whole thing on a stand, and then extend the case’s hood flaps.

The monitor also has built in LUTs for adding rec709-style contrast to video shot in Log, with separate options for Canon Log, Sony Log and others. Plus, you can load up to 16 custom 3D LUTs into the monitor. You can build the LUTs in standards like Resolve, and then convert them to Flanders’ custom format using apps like LightSpace CMS or Lattice.

For my purposes, the only hitch with the Flanders is that it has two HD-SDI inputs (and outputs) but no HDMI input. HDMI is what my Paralinx Arrow receivers use to bring wireless video to the monitor, which is brings us to the next bit of gear on my rig….

(Note: the CM171 does have a DVI connection, and you can indeed get an HDMI-to-DVI cable to connect the Paralinx receiver to the monitor’s DVI port, but the image won’t be as sharp or as colorful as you’ll get by using the monitor’s HD-SDI inputs). 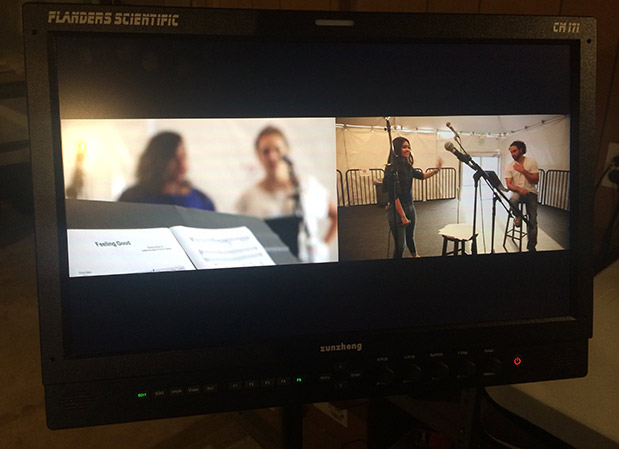 Showing two angles at once is one of the unique features of Flanders monitors that you don't find in many other brands.

The Connect H2S ($295) is a palm-sized gadget that converts HDMI into an SDI signal. At 4 ounces, it’s very lightweight and can run for an hour on an internal, rechargeable battery. That’s useful in a pinch, but it also ships with an add-on battery (based on Sony L series specs) that can power the converter for another 10 hours to get you through a day. You can also power the Connect with a p-tap. 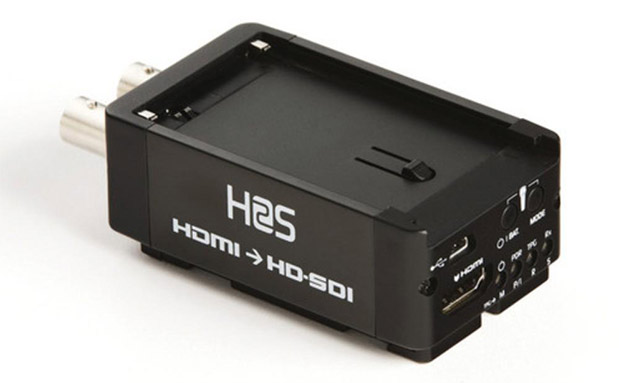 With the help of a little velcro, I’ve attached two of these Connects to the backside of my Flanders monitor. Each one plugs into a Paralinx Arrow receiver via a 12” HDMI cable ($12.95) on one end of the converter, and a 10” coiled HD-SDI cable going to one of the Flanders’ SDI inputs.

When I start a shoot, I clip the small 10 hour batteries into each Connect, and press a little power button to get things going. An LED shines green to show that the converter is doing its job.

I use a Paralinx Arrow Plus receiver ($1049 for receiver/transmitter) to bring each camera angle to the Flanders CM171, wirelessly. The Arrow transmits 1080 video up to 60 fps with 4:2:2 subsampling at 10 bit color depth, so it accommodates full-quality video from most cameras, with no latency. Advertised range is up to 300 feet with line of site, and 150 feet with obstacles, but real world usage can vary wildly. Still, after using an Arrow for about 2 years, I've never found range to be an issue for conventional jobs. 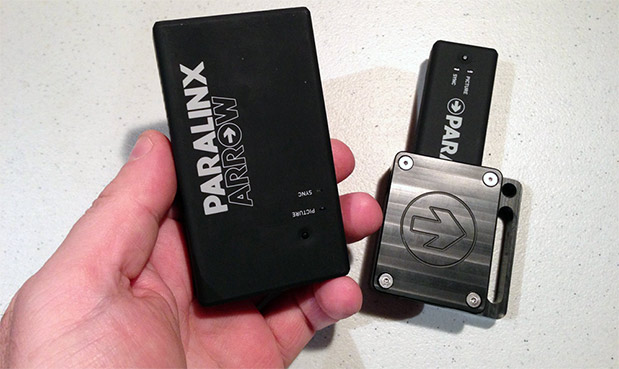 As I said above, the Paralinx is at a bit of a disadvantage when working with the Flanders monitor, since the receiver only has an HDMI output, and the Flanders uses HD-SDI inputs. But besides that issue (which is solved by my Atomos converters), the Arrow is pretty ideal for a couple of reasons… 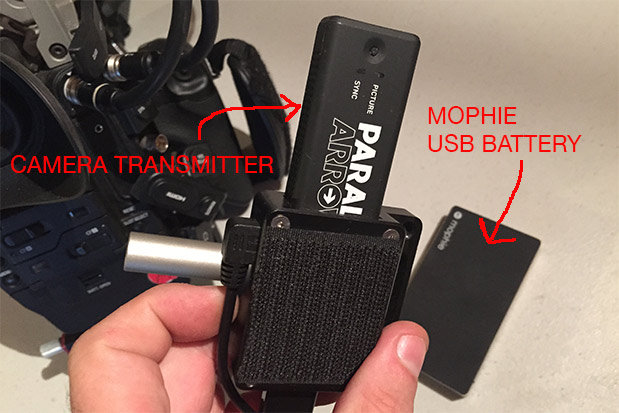 The Arrow transmitter sits in a small protective shield (an add-on accessory). I velcro a Mophie 2.1 amp USB battery to the side, which powers the transmitter for almost 3 hours. 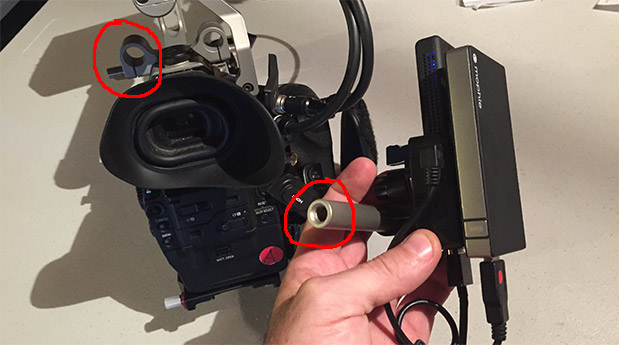 I use a Redrock Micro doohickey to attach the transmitter shield to a 4' 15mm rod, which goes into my MovCam top handle.

So there you have it. My monitor rig doesn’t look very slick from the back, and I could still spend some time tucking in cables to clean it up a bit. But the whole rig, fully assmbled, still slips into my Flanders slim softcase, and I can pull it out with one hand, and get it completely set up on a light stand in about 60 seconds.

Being able to run dual camera angles completely wirelessly all day long on just one or two batteries makes this rig one of my favorite pieces of gear.