While this might be a tiny thing there are way more features I love about Premiere than hate. I still maintain my belief that Premiere is the most feature rich and highly customizable tool out there for craft editorial.

This is a post that is a longtime coming because this little “feature” has been in Premiere Pro for a long time. It’s something I’ve discussed both publicly and privately, with Premiere editors and Adobe engineers. It’s not exactly a “feature” I don’t think but rather just the way it operates when you’re doing a specific thing. It’s something you probably don’t think about or might not have ever encountered without a very specific sequence of events happening. It’s not flashy and it isn’t a change the marketing department would ever boast about and a press release but it’s the kind of thing that if you encounter it you encounter it a lot and it’s a real pain to work around.

It’s also the kind of feature that is what I often call an engineer feature and not an editor feature meaning it’s the kind of thing that seems logical when an engineer is designing a non-linear editing application but in the real world of editing it does not behave the way most editors would want for most common editing use cases.

Allow me to step up…

What is this hated thing I’m talking about?

I’m talking the tiny little + thingy that pops up in the timeline track patch panel when whatever you have loaded in the Source Monitor has more audio or video tracks than the currently loaded timeline.

There’s a few reasons that this little feature is so hated by editors everywhere (at least by me and most every editor I’ve talked to about it) so let’s break those down.

Editors want control over their NLE and while we welcome automation and most simplification what we don’t want is the NLE doing things without our permission. Adding tracks to an existing timeline would be at the top of my list. The timeline is a personal place. A place where you spend a lot of time. On a complex show you’re very purposefully placing different things in different places, often for specific reasons and auto-creating new tracks can mess that up big time.

Plus, if you’re working on a laptop or somewhere with limited screen real estate auto-creating a ton of tracks means you have to break the editing flow, scroll around and adjust panels to delete all the tracks and/or clips you didn’t want in the first place! 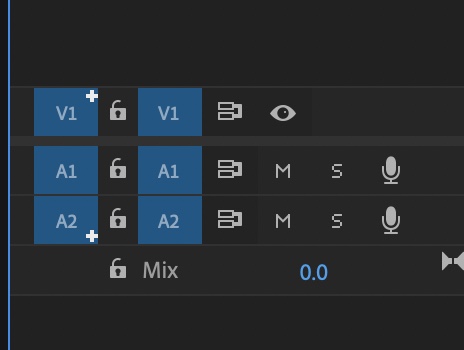 In many (most) situations the editor has setup the timeline with a specific number of video and audio tracks so automatically adding more is rarely desired.

Depending on the job the editor might have designated tracks for specific items, source patching presets for different clips or source timelines and workspaces meticulously built and saved that have to be moved and/or changed just to work around the havoc the little + thingy can wreak on an existing timeline.

All I wanted was my original multicam audio in the timeline w/o drama 😢😤 pic.twitter.com/xeR6Awymum

It’s way more often a case that not you do not want all of the channels/tracks from the source media in the current timeline.

There’s so many instances where you might load media you want to edit with into the Source Monitor and not want to include all of the channels/tracks into the current edit timeline. Those can include but I’m sure not limited to:

That’s a few of my notes as to why the default behavior of this little + thingy isn’t good. You make have others.

But Scott, you can just delete the stuff you don’t want after you make the edit or better yet just click the little + thingy and turn off all the tracks you don’t want. Why are you that lazy????

You can do both of those things above, correct. But if it’s deleteing the extra media that’s huge chore and so much extra work over and over and depending on what you’re editing in, like a Source timeline, it can take work to make sure you’re only selecting what you don’t want and not what you do. And if it’s clicking the little + thingy and turning off the unwanted Source patching that is having to do a TON of mouse moving and clicking. Potentially hundreds or thousands of times during the course of an edit. That is a huge time suck.

But Scott, you said “editors everywhere” hate the little + thingy and that’s not true as I like it!

Uhh yea there are no absolutes in life and I was exaggerating but I have never personally talked to any editor online or in the real world who likes this behavior and I have talked to many of them about this little thing. This has been a long discussion in the old private Premiere Pro beta group going back years where engineers talked and engaged on this but nothing was ever done. Not a single editor in that group liked this behavior that I can remember.

I’m not the only one who wants this behavior changed and there is a User Voice item for just this so please go vote for this. Currently it doesn’t have a ton of votes but I think that’s because it’s one of these deep editing features that isn’t flashy, isn’t “hip” and quite hard to search for since the terminology isn’t exactly standard. Adobe’s own forums have this discussion too. What kinda shocked me was this reply to one of my comments on this issue:

That’s shocking and I think they are getting a feature request of automatically adding tracks when dragging clips or sequences into a timeline vs. working from the Source Viewer. Dragging things into a sequence all the time in is a noob way to edit and I can see the confusion when someone drags clips in and doesn’t get what they expect. Working from the Source Viewer for proper 3-point editing is a bit of a different beast. There is some good discussion of just this in that Adobe User Voice request on this topic as it has been reignited because of my discussion of this on twitter.

How do you propose to fix this?

It’s easy, add a preference to auto-create new tracks so the editor and turn it on or off. This is how Avid Media Composer does it and it works great. 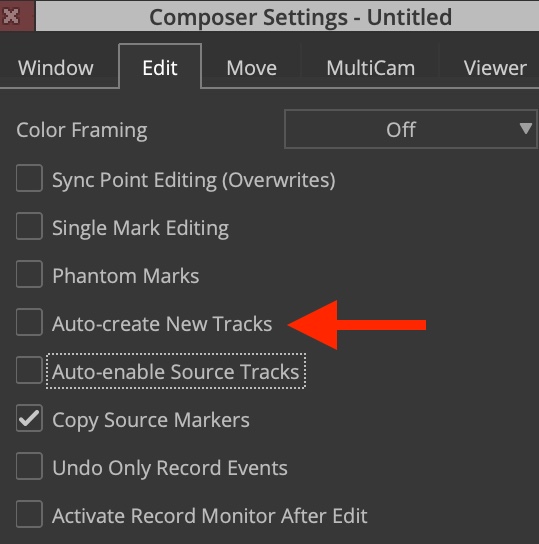 Another great idea on the user voice post is to make it preference that can get toggled on when you go to make an edit that would auto-create the new tracks.

UPDATE 5/29/22 – There’s a great discussion on the Adobe Premiere Pro Editors Facebook group and Andrew Taylor had a few ideas that are worth mentioning:

A couple of ideas I have. A preference in the wrench menu – “Automatically add extra tracks on insert.”
Or just don’t add the new tracks unless the user clicks the + button.
Another way. If you have media in the source monitor with more tracks than the sequence can hold: Along with the + button, display the extra source targets *disabled*. This way tells me there are additional tracks, I can leave them off, turn them all on, turn on selectively, reorder, or dig into the media to investigate what’s on those tracks.
And if the dialog box to remove empty A/V tracks could be accompanied by a single press shortcut key that would be fantastic
I love these ideas. The wrench menu does seem like a place where this option could be chased. But more than that I LOVE the idea of almost a ghosted patch panel that shows what you might have if you hit the edit button. I suspect that might require a bit more engineering than just a preference so I doubt anything that complex will happen but a preference seems the best bet. The easiest thing might be the idea that the tracks only get added when you actually click the little + thingy and I’d be okay with that too.

If you’ve made it this far you must care about this little + thingy and the auto-track creation in Adobe Premiere Pro. I know I do. If you’re here please go vote for an update to this feature on Adobe User Voice: Remove auto-add audio tracks. There was another User Voice on this I saw awhile back but can’t find it now so let’s up-vote this one!