Blender, Shotcut or Piviti are not names all video editors know, but they are part of a list of NLEs and other tools, for different platforms, that can be had for free. Check them here, now! 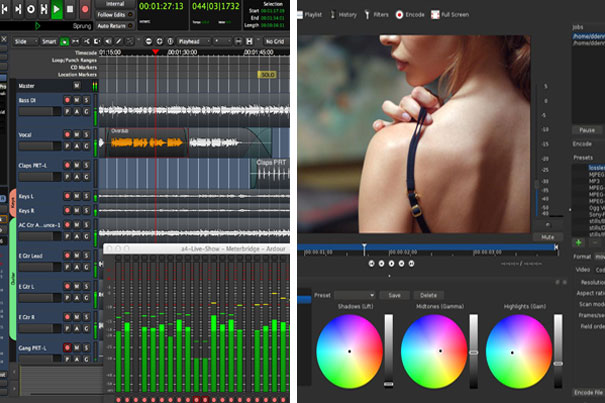 The guide for “The BEST and FREE video editing software” we published recently never aimed to be a complete list, as the number of video editors and other tools used by the industry is growing all the time. We look, now, at some more options available in the world of free and FOSS or Free Open Source Software. Some are not straight in your face programs, and need some tweaking and getting used to, but here is a new list, in case you want to try something different.

Beware, though, if you want to proceed! While a normal commercial program – and some free software too – is something you open and use, some of these programs may need user’s input and adjustments to work properly. So, some of these tools are not for the faint of heart. Still, they can and do offer some people not just the excitement of exploring new paths, but valuable tools, a fact suggested by the popularity some have achieved. 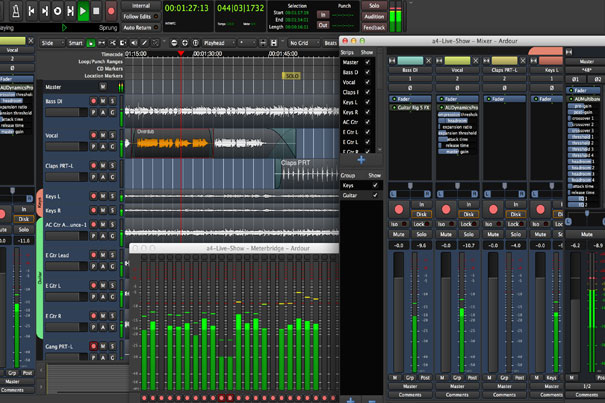 Ardour is generally considered to be the main free and open source (FOSS) program for DAWs, or Digital Audio Workstations. It is a complete suite with its own set of effects, plugins and development cycle, available for Linux and OS X.

It should be noted that the FREE in Ardour is not completely free. Authors ask users to give at least $1 to download the program with all the features, although there is a free version, with some limitations, to test. Besides, once you download the program you are free to do anything with it that you want (including use it on as many machines as you wish, make copies of it for friends and so forth).

We include the program here for practical reasons, and because users can download the source code for free and use with the program… although this may be a complex task for most of use.

Ardour can, anyway, be considered, as another example of an open source, collaborative effort of a worldwide team including musicians, programmers, and professional recording engineers. Development is transparent — anyone can watch our work as it happens. Like a good piece of vintage hardware, you can open the box and look inside. Of course, you don’t have to … but one day the fact that anybody can will be useful.

According to the authors, “this openness forces a kind of integrity on the project that is hard to find in proprietary software, and helps us to focus on issues and features that matter to our users rather than stuff that just looks good in advertisements.” Ardour is also used with Blender through the add-on Blue Velvet (see entry Blender Velvets). 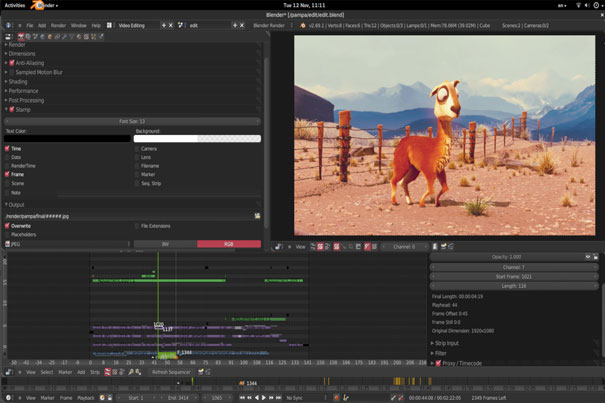 Blender is a good example of a tool that adapts to different needs. Popular as a free and open source 3D creation suite, it can be transformed to be a complete suite for video editing, through the use of add-ons. The open source tool supports the entirety of the 3D pipeline—modelling, rigging, animation, simulation, rendering, compositing and motion tracking, game creation, and even video editing, which has become a more prominent feature in recent releases.

Conceived for individuals or small studios, Blender can be customized through its API for Python, and these tools created by users become, many times, part of future releases. Blender is cross-platform and runs equally well on Linux, Windows and Macintosh computers. Its interface uses OpenGL to provide a consistent experience. To confirm specific compatibility, the list of supported platforms indicates those regularly tested by the development team.

Blender released recently their new 2.75a version, so this may be a good time to give it a try. And not just for video, as it does many other things, as it comes with a fully-fledged compositor built right in and production ready camera and object tracking, allowing you to import raw footage, track the footage, mask areas and see the camera movements live in your 3D scene. 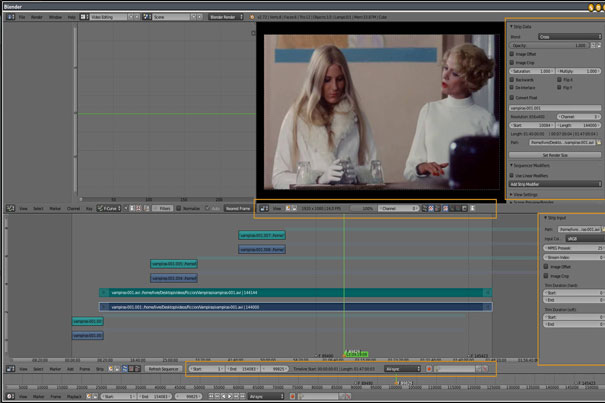 While the native video editor in Blender is more ambitious than ever, it still lacks some features, and that’s what add-ons like the Blender Velvets series does. This series tries to, as the creators, say, “put some makeup in Blender so that it can be played at maximum volume.”

Presented as glamorous new functions for video editing in Blender VSE, and “to be used with lots of glitter”, the add-ons available are four. The first of them is the Space Sequencer, which allows to change the interface in Blender to one that is more adapted to video editing. The second is Velvet Revolver, which “aims to automate the generation of proxies so that you don’t have to worry about all the technical stuff. And once you will not want to start a complex editing project using videos in h264, or with different framerates (FPS) due to a Blender limitation in mixing them, the add-on also allows for the creation of copies of your original material using the ProRes422 or MJPEG codecs, which are the best formats for video editing.”

Velvet Goldmine, the third add-on, aims to improve the fluidity of video editing by redistributing some keyboard shortcuts for functions that already exist in Blender, by making some of the processes that ask for unnecessary confirmation (such as deleting strips on the timeline or saving the project) more direct and by creating new functions for navigation, strips manipulation and manipulation of the timeline itself.

Although Blender offers audio functionalities since 2011, external help is still needed for more complex projects, and that’s where Blue Velvet comes into play. This add-on integrates Blender with Ardour, making it possible to export a project’s timeline with all its audio cuts from the first program to be fully edited in the second tool. Ardour (see entry above) is a complete suite with its own set of effects, plugins and development cycle.

The Blender Velvets add-ons were updated to work with the most recent version of blender, 2.75. 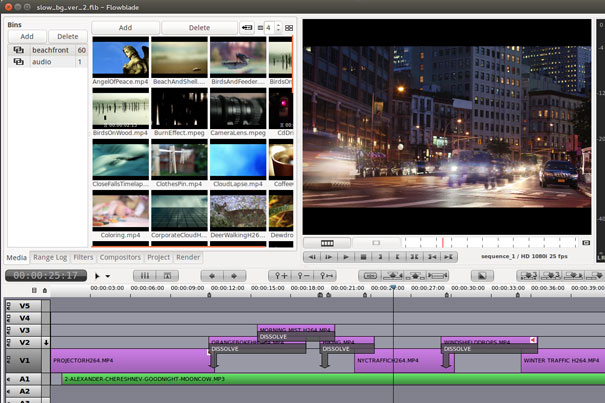 Flowblade Movie Editor is a multitrack non-linear video editor for Linux released under GPL 3 license. Flowblade 1.0, which is the eighth release of the program, launched June 2015.

Dating back to 2012, Flowblade is designed to provide a fast, precise and robust editing experience. The information available suggests that Flowblade employs film-style insert editing model for workflow. In insert editing clips are generally placed tightly after other clips when they are inserted on the timeline. Edits are fine-tuned by trimming in and out points of clips or by cutting and deleting parts of clips. Flowblade also provides powerful tools to mix and filter video and audio.

The next release of the program, Flowblade Movie Editor 1.2 is scheduled to be available between September and November 2015. 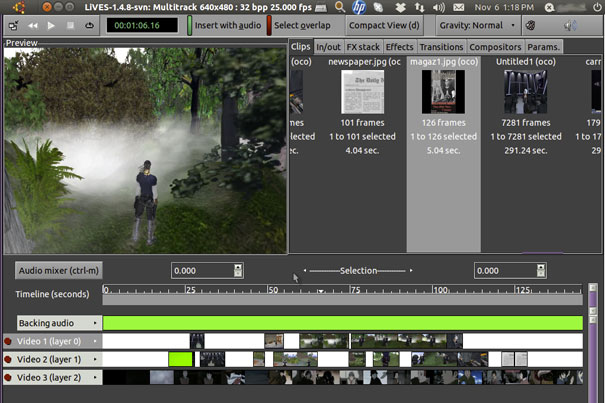 Designed to be simple to use yet powerful, LiVES is a Video Editing System small in size but offering many advanced features.

The program mixes realtime video performance and non-linear editing in one professional quality application, state the creators. It will let users start editing and making video right away, without having to worry about formats, frame sizes, or framerates.

LiVES is both a VJ tool for professional performances, and a video editor capable of creating clips in a huge variety of formats. It is a very flexible tool, allowing to mix and switch clips from the keyboard, use dozens of realtime effects, trim and edit clips in the clip editor, and bring them together using the multitrack timeline. It is also possible to record a performance in real time, and then edit it further or render it straight away.

For the more technically minded, the application is frame and sample accurate, and it can be controlled remotely or scripted for use as a video server. And it supports all of the latest free standards. 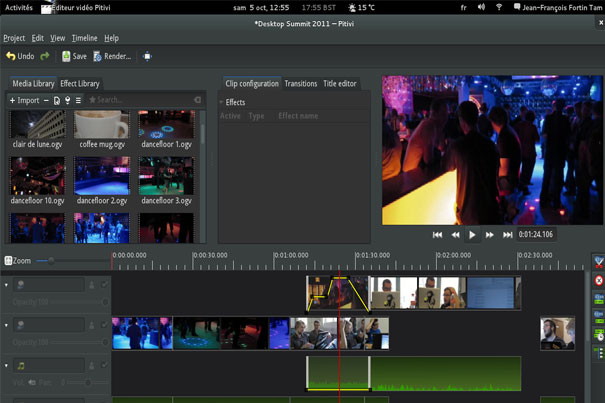 The goal: provide a professional, yet simple to use video editor for the Linux community. The path: crowdfunding.

What happens when you get a team of people who “believe in allowing everyone on the planet to express themselves through filmmaking, with tools that they can own and improve? The answer can be PiTiVi, or more recently Pitivi, an open source, non-linear video editor for Linux.

Designed to be intuitive video editing software that integrates well in the GNOME desktop environment, Pitivi aims to be “a powerful, flexible video editor that can appeal to prosumers and professionals.” Work on the software begun in 2003, but the path to the so much wanted version 1.0 has not been easy. The first version of the program was launched in May 2004 and the most recent stable version, 0.94 is from November 2014.

Pitivi version 1.0 is coming, the team says, but they need contributors to support the project through crowdfunding. In February 2014 it was announced that a total of more than $100,000 was needed for development, from which $38,000 for the first phase, the launch of a stable release, the so called version 1.0. The campaign, with 829 backers at the moment, has raised close to $27,000 until now. If all goes according to the plan, somewhere in the future the program will also be available for Mac OS X.

Only time will tell if Pitivi 1.0 makes it to the list of Free and Open Source Software as the people’s professional video editor. 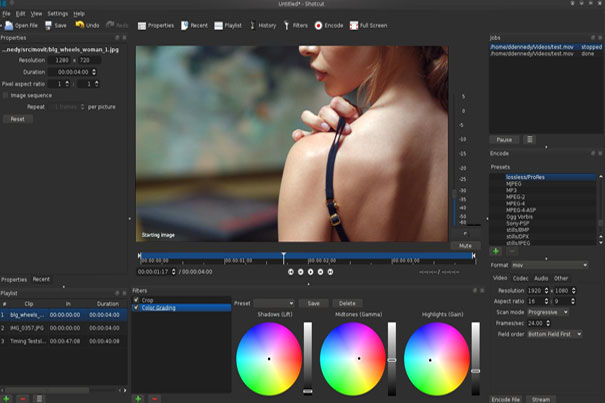 Shotcut – the memory of Kino

Shotcut is a free, open source, cross-platform video editor available since 2012, aiming at creating an easy and reliable DV editing for Linux, Windows and OS X.

Although under a new name, the concept of Kino, which many pointed as the only viable free option for Linux users for quite some time, is still present in Shotcut. It’s not strange, as one of the authors of Kino, Dan Dennedy, is involved in the new project. The author stopped Kino’s development cycle in 2009, and after some time involved with other projects launched this new title.

Shotcut has been able to do 4K (the UHD variety) for a while now if users make a custom video mode or correctly use automatic mode. The feature has been present, although not documented for some time, as the authors wanted to adjust it before making it official. To use 4K UHD you need to use a 64-bit build (available for all platforms). The most recent release, 15.7, from July 2015, adds 4K video modes to the Settings menu and extends support for Blackmagic Design 4K SDI & HDMI devices.