How to get THM data into Avid

If you have a Canon 5D and edit on Avid, I have the missing link.

(And if you edit on something else, I still have the missing link… see the bottom of the article.)

So, I’ve had my Canon 5D Mark II for a few years. I’ve used it on a few jobs that I’ve edited on Avid Media Composer or Symphony, but I never really cared whether the TOD timecode and other metadata came across from the .THM files that accompany the .MOV files that come from the 5D. I always either just used AMA to link to the .MOV files or imported them and converted them to DNxHD files (MXF) inside the application, losing all of the metadata of the .THMs.

Well, no more. I recently shot quite a bit of footage over the course of 10 days using the 5D and I really wanted the information that was in those THM files. So what to do?

Well, a company called VideoToolShed had the answer for my dilemma and maybe yours too. VideoToolShed is actually a software company that provides very specialized little pieces of software that do some very cool things. They’re very useful, usually, because the chief coder is a video editor, so he makes things that he needs or that his other editor buddies need.

The missing link between my 5D and my Avid is an inexpensive little application (for Windows or Mac), called “Avid MXF Creator,”  that is actually completely separate from the Avid. It can run on virtually any computer (including the one your Avid is running on, if you want), and it turns almost any file-based camera original file into an MXF file that is ready to import into Avid instantly, since it’s in its native format already.

The application itself is very simple and no-nonsense. The UI is clean and sparse. 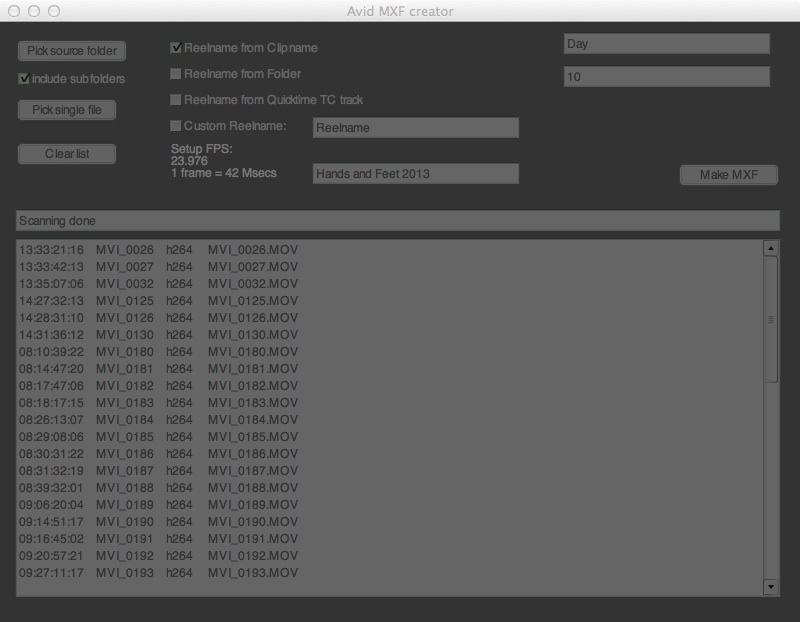 The short version of the story is that I pointed the app at a folder full of THM and MOV files straight off a CF card from my Canon 5D and told it to write the MXF files to another folder. Minutes later, without running my Media Composer at all, I had a folder full of Avid-ready video files that had TOD timecode pulled from the matching THM files in the folder.

As a comparison, I took some of the files and brought them in through AMA and then transcoded them.  The “experimental” import was of 21 clips with a total length of almost 15 minutes. It took Avid 11 minutes to AMA link, then transcode them. It took VideoToolShed’s “Avid MXF Creator” only 8 minutes to turn the same files into the same DNxHD115 files. To be fair to Avid, once “MXF Creator” was done, I still needed to move those files over to my Avid MediaFiles folder (instantaneously) and then Media Composer took several minutes to scan the MediaFiles Folder. Then I had to launch the Media Tool to locate the new files and move the resulting clips to a new bin. Basically, timewise, it was probably a wash, except for the fact that my Avid-generated clips all had identical starting timecodes of 00:00:00:00 while my “MXF Creator” files all had the correct time of day timecode. (See the screenshot below and note the “duplicates” of MVI files. The ones with 00:00:00:00 timecodes were Avid generated, the ones with correct TOD are “MXF created.” Note that those files also have a number in the “Day” column that came from “MXF Creator.”) Also, while I was generating all of those MXFs in “MXF Creator” I still had complete use of my Media Composer for editing. Of course, while I was trying to generate those same files using AMA and transcoding, my Media Composer was tied up. 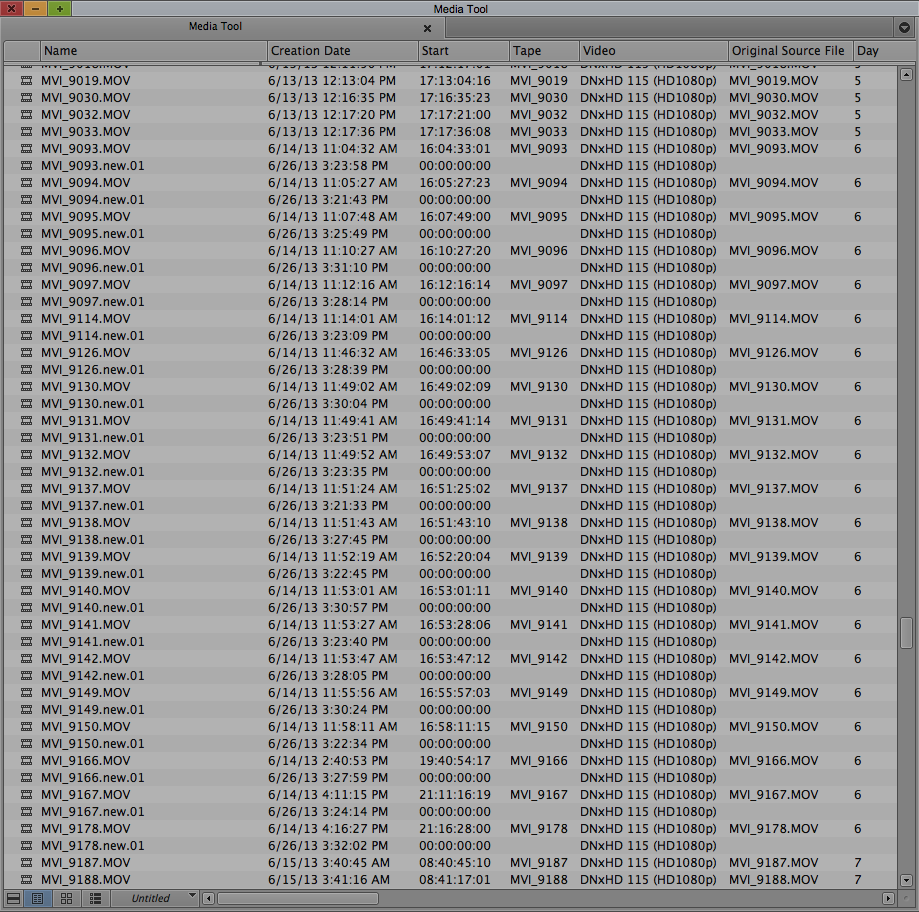 Another small thing that  “MXF Creator” allowed me to do was to create a custom bin column from within the application and also populate that column with information. Since I wanted to create the MXFs in bulk, all of the column information for each of the imports had to be the same, but this still worked for me, because I imported each day’s footage in a batch, so I was able to have the custom column include which day the footage was shot on. When I opened the clips in Avid, the “DAY” column was there and each clip from each day was already labeled with the number of the day on which it was shot. Other than that, the Avid-generated clips and the “MXF Creator” generated clips looked and acted the same. 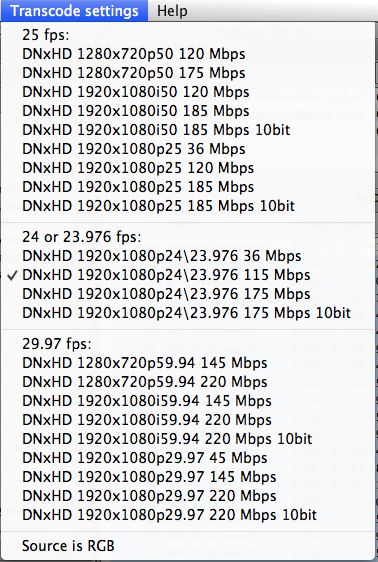 As I alluded to, the operation of the app is very simple. First, select the DNxHD or video format that you want to convert your files to using the Transcode Settings Menu. Pick a source folder (or camera card) that contains your .MOV files. Choose a method for determining reel names, which is important for relinking clips. I used the default method: “Reelname from ClipName.” Optionally, you can assign a Custom Heading (bin column name) and Custom Heading Content (the text in that column next to all of the imported clips). For me, my Custom Heading was “Day” and then, with each batch import, my Custom Content was a number indicating the day the footage was shot. To start the process, press the “Make MXF” button in the UI.

VideoToolShed is very responsive to suggestions and new features. But the basic functionality of most of the apps on the side is pretty … basic. Two features I missed while using this app were an estimate of how long the encoding process would take and an audio signal indicating that the encode was done. There is a text readout of how many files there are to encode and how many are already done. I lost a lot of time because I didn’t know that one batch encode was done and that I could move on to the next batch.

If you have lots of transcoding to do inside Avid, from Canon 5Ds or other cameras, I would definitely suggest this app as a way to handle this chore without tying up your Avid. Obviously, some of this app’s “thunder” has been stolen by Avid’s release of MC7 today, which includes Dynamic Media Folders, which allow you to transcode media without using Media Composer. But still the cost of this app compared to a MC7 license and its ability to read the metadata from the THM files of the Canon 5D MII definitely mean that it is a little piece of software “kit” that could do you some good.

If you don’t need to transcode to MXF for Avid, but you still want to have your Canon 5D files turned into QT files that have the correct TOD TC from the THM files, then I’d suggest another application from VideoToolShed called QTChange. This provides the same basic functionality, but creates QT files instead of MXF files.

Disclaimer: I did receive a free copy of the software for review. Dear FCC, I can not be bought for $89. But if you read any of my emails through the NSA email-tapping program, you’d know that already.  Wait… do I hear black helicopters approaching? How would I know they were black by the sound?…