So I skipped the 3G since it wasn’t different enough, but the 3GS and the end of my contract (I was one of those Day Zero, $600 mow-ronns), but REAL GPS (with direction), 4 times the capacity, voice commands, better camera with video was enough to convince me.

Happy discoveries: new and improved headphone cord with volume, new smaller power brick (same as 3G as far as I can tell, but smaller than the original’s). Nike+iPod works without the dongle! Just need the shoe sensor for it to work. SWEET. My old iPod Nano just lost its reason for existence (and perhaps its will to live). Compass is cool, overall YES is faster but a few surprises as compared to the OG (OriGinal iPhone)

So here follows the typical nerdery: unboxing pics, details of migration from one phone to another, boot and app launch times compared between 1st gen and 3GS iPhones, etc. And of course, some video from it to follow…

Read on for full geeky details…

So I was out for a bike ride (benefit of being “between projects” in Santa Monica) when UPS came by and left their note to the effect of “we missed you, signature required, be back Monday.” GAH! I called and they were nice enough to re-deliver the same day.

THANK YOU UPS, way to go the extra mile!

So if you order via mail, it comes in a plain little box 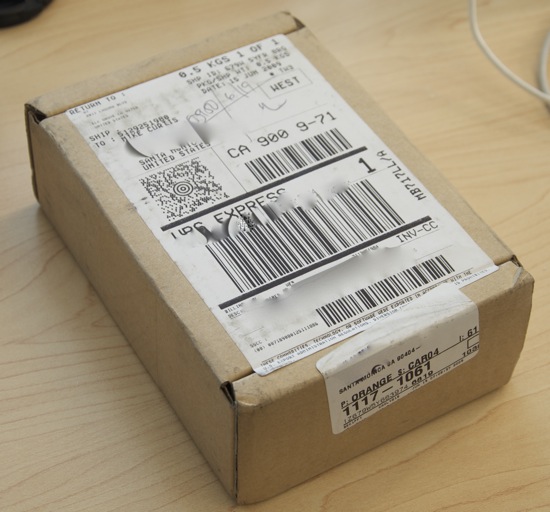 Open it, and the iPhone retail package.

There’s a little folded over area which makes you think there might be something in there….

I got the black 32GB model, and as a Day Zero purchaser got the new customer price of $299. For those who bought a 3G in the last year, you get the privilidge of paying extra to get the new model. Feh.

But then there is the nice retail box: 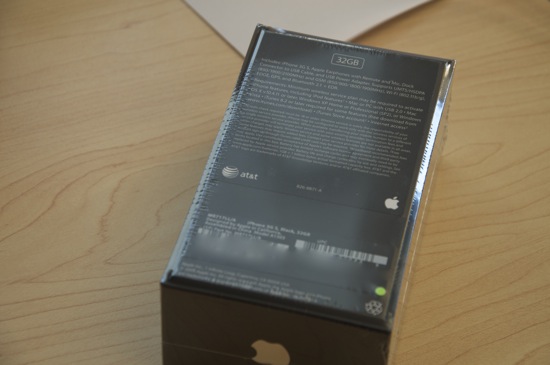 Open up the actual packaging (the retail box) and you get to the phone, sitting all pretty up top. Score one for Apple and the “aaaAAAAAAAAAaaaaaawwwwwww” moment (cue the Star Trek “Awe” theme. You know it. You KNOW you know it. Yeah…I’m going there. Stop me if you dare, bitches…)

“It’s so shiny – mark of an unbiased reviewer, no?

Underneath a little tray

Underneath that, a booklet of instructions.

Which folds out nicely to show some very clear instructions:

Once again, Apple does a very nice job of the OOBE (Out Of Box Experience).

It makes it abundantly clear that you should download the latest iTunes if you haven’t already and plug it in.

Unlike the 3G, but back to the way it was with the original iPhone, you can activate it from home. SCORE.

Who wants to go to retail when it can just show up on your doorstep? Presuming you have someone there to sign for it, of course.

Here’s everything you get:

You get the standard little USB to iPhone cord, the new small (smaller than original, same as 3G) power plug (too small to be called a brick, really), and a new and improved headphone set – now with an up/down button in addition to the clicky button and the microphone. My original headphones fell apart (literally), so I got the Apple replacement, and I didn’t like the new cord material – soft and flexible, “stickier” (clings to surfaces better), but somehow less manageable due to the stiffness of the cable/cover. I like the older material better, but that’s me.

Here’s the goodies beyond the phone:

Here’s the little charger plug (too small to call a brick). Yes, I haven’t taken the protective plastic off, but not because of fetishism, I just hadn’t done it yet…

NO dock included, which is par for the course, but feh…for $300, come on guys.

iPhones are all about the accessories, anyway -I’d already purchased a $30 case and a clear screen cover, even though Apple touts this screen as more oleophobic (“afraid of grease”?).

The external form factor appears, to casual observation, to be EXACTLY like the 3G. Oh, except it can now say “32GB” on the back. SCHAAAAWEET!

Sad to think this thing has about the same capacity for audio/video as my AppleTV, but that is the march of progress. While this one fits in my pocket, SD video out is the maximum. And speaking of video out, I need to play more with that…

Actually hooking it up and getting it working, after having a 1st gen iPhone

Plugging it in, I was pleasantly surprised to see the new option of setting this up as a new iPhone _OR_ restoring from the saved setup on my previous iPhone – hooray!!

I opted for the latter, thinking it’d pull over all my “stuff” with it – we’ll discuss how it did in a bit.

First it pulled the saved contents of my 1st gen iPhone, but after it completed, it Sync’d with iTunes AGAIN, and retransferred ALL of the songs, podcasts, etc.

Harrumph – inefficient! It just did that from the sync I’d done 20 minutes before with the other phone.

All in all, included filling out the screens with my phone number, zip code, and last four digits of my social security number (so they could verify it was me and my phone for AT&T), it took about 40 minutes to get up and running. But by the end of it, and even by the end of that…the phone still hadn’t activated.

During this process, however, my old phone switched from “AT&T” to “No Service” – so as of nearly an hour after I started the process, I have two phones declaring “No Service”.

(the phone did activate after about an hour and twenty minutes from initial plug in, I think, so about 40 minutes from fully sync’d up)

Migration issues – what worked, what didn’t

What DID transfer over nicely from the restored image from my 1st gen iPhone:

-Apps – all the apps seem to have loaded, in their saved positions. GOOD.
-settings for Apps:
-stocks – it has my stock list in there
-Weather – has all my cities in there
-Calendar – this is an important one – seems to have all my events in there
-WiFi – uh oh, it asked me for my WiFi password – which the old phone had saved in there – I had to enter it. Hmm…..foreboding.
-Mail – more bummer news – it didn’t recall my .Mac mail password. Of all the gadgets it ought to know the passwords for….

even before it established phone service (one hour and counting as of this writing), it at least had all my recent calls (imported from other phone’s setup) in there – GOOD. Contacts – yep, all there as expected. Voicemail – since still hasn’t activated as a phone, none yet.

Preferences for other apps – Now Playing, my favorite movie finder, remembered all my settings. Good.

Chats were maintained – I was worried I’d lose chat history, but I didn’t – GOOD!

Some side by side tests:

Important to note – these iPhones are IDENTICALLY configured – same exact apps, number of contacts, etc. – the 3G was configured from the saved image from the first gen iPhone on my laptop from a sync 20 minutes before I plugged in the 3GS. So while the 3GS has more storage and faster hardware, this is as close as an apples to apples comparison as can be had – same apps, same software version, same everything else. Also, all these times are based on WiFi connections. I can test non-networked performance tomorrow with my roomie’s phone that is another 1st gen iPhone.

Boot time from screen on with Apple logo until “swipe me” screen appears:
OG: about 49 seconds
3G: about 22 seconds
bonus round – a first gen iPhone with pre-3.0 software (I’ll check version when it is back in the house): 31 seconds – so v3 software definitely increases boot time.

OG: until “swipe me” screen: 43 seconds
3G: until main screen up (no swiping needed)27 seconds

I could show you video of side by side, but you’d get bored…

Loading a new page (neither iPhone had loaded it before) from the NYTimes.com site, from button push until completely loaded (blue loading bar disappears)

Clicking the same link on both, from click until fully loaded (blue bar gone):

Clicking another same link on both, click until fully loaded on a graphics heavy page (samsung ad):

Note these were both on WiFi – I’d expect non-networked to be waaaaaaaay faster on the 3GS, I’ll verify tomorrow. Also, I was about 5 feet from the Apple Time Capsule that I use as a base station, both had 5 bars of signal, so pretty much full on connection (cable modem is the source).

…and this is my strongest indicator that the WiFi performance on the 3GS is better than on the original iPhone – for this to begin playing, it has to stream in enough to think it’ll finish loading the last frame before it has to play it. Note the sizable discrepancy here!

Launching YouTube app, from button push until Favorites are loaded up:

Interestingly, on my one test pass, the original iPhone was faster on this one – although other tests would indicate that the 3GS seems to have a faster network connection/throughput.

The icanhascheezburger app (lolcat app) came up a tiny bit faster on the OG than the 3G, and also loaded pictures faster (by about 1/3 of a second, no biggie)

Launching Airport Status, from button push to all info loaded on the first screen:

update from phone in theater – Too late for Up, seeing Land of the Lost , ONLY person in theater!

Consolation prize – I snuck in a beer…