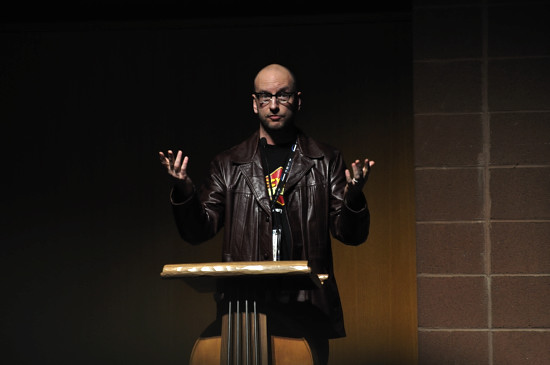 (I’m at Sundance, I’ll update with pics as soon as I get a cable to upload – I’m at a friend’s condo right now, cables back at mine – drat)

Just got back from the Sneak #2, the worst kept secret of Sundance – Steven Soderbergh’s new film, The Girlfriend Experience. Highights from Steven himself before and from the Q&A afterward the jump.

-his third film shot on Red, said the camera has changed much since they came out, sensitivity has improved. He seems happy with it, since he’s shot yet another film since then

-this is another one like Bubble – for 2929 films, cast with mostly “real people” who were similar to the roles they cast, such as a real life journalist who wrote an article about a busted escort service. That guy interviews

-screened as a 1080p rough cut from 4K source files, I’d GUESS, but have no solid confirm, that these are from ProResHQ Final Cut Pro dailies – not much color work done, but VERY natural light – I’ll have to ask Ted (he was there too, sitting with Matt Cohen from New York’s Tekserve, which has provided support for prior Red film Che)

-only two scenes that WEREN’T natural lighting – I was curious why so much high contrast lighting – I kept thinking “Where was the bounce card or fill?” but creative intent seems to be to go with what was available

-budget was $1.7M, shot over 16 or 17 days (can’t recall) – but fast and CHEAP by studio standards. This definitely looks MILES better than Bubble

The story is told in a highly nonlinear fashion, we learn bits and pieces as we go. The story is confusing at first as we are introduced to new characters, it appears that Christine (Sasha) is on a date with a guy where they talk semi-awkwardly about the movie they just saw – it seems like a first date. They go back to an apartment, drink wine, smooch with obvious history and comfort, so OK, they already knew each other – early in the relationship then? We see her get up naked the next morning and leave, he quickly says goodbye while on the phone, not even getting up to kiss her or anything (as she remarks to a friend later over a meal)

We see her enter an apartment with a particular painting on the wall.

We see another guy working as a trainer in a gym, and later he comes back to an apartment with…the same painting. Wait a minute – how does this work – roommates? We see them being close together, and as other events unfold we realize that she is an escort/call girl, sex for hire.

She’s in a committed relationship with this guy, who knows about her escort job, and there is definitely tension over it – it is a primary theme of the film.

Stephen talked briefly about the film before, and did Q&A afterwards, and is self-admitedly still working on the film, playing with the structure, timing, pacing, reveals, etc.

The footage was a mix – parts were gorgeous as was, other parts I kept wanting some fill or scrim or ND over windows, etc. Only after he described that all lighting was natural but for two scenes did that make sense – it was what it was, not balanced by professional lighting.

I’d guess that they are going to do another simul-release like Bubble was, but I don’t know that. It is a 2929 production, which is the production company associated with Mark Cuban, and they did a day-and-date HDNet, DVD, and theatrical release on Bubble – maybe they will do the same? Pure speculation on my part, have no idea.

But it is encouraging to see what can be achieved on Red with no additional lighting and I’d guess no serious grading to date.

I’m no great deep cinema guy, and Steven is clearly still working on it (shot in October with LOTS of timely references to the impending election, the economic crisis, etc.), but it felt way not finished – even untangling the facts as presented, the story didn’t seem to resolve or end satisfactorily – but perhaps that isn’t a priority for this experimental film. I thought the acting was sufficient (unlike Bubble), but Gray’s intentionally flat affect (part of the character) does make it tough to connect to what is going on here (except for one scene where she cracks her shell with a new customer, and then wants to see what might develop there, but in the end is blown off by the guy). A sad, empty, rigid life she lives.

….so obviously, this isn’t going to be an Oceans 11 mass appeal kind of a movie. But I respect and salute him for experimenting – god knows that is hard enough to do these days in this economic climate, which was what he discussed earlier that day at a panel, which I’ll write about later….

-mike, late at Sundance, more coverage to come, but this seemed most timely.

IndieWIRE has a more cogent analysis of the film as well.

PS – I drunk blind blogged (couldn’t see what I was typing on misloaded iPhone page) a nice little victory for the film I was peripherally involved in here – Over the Hills and Far Away – got a positive reivew in Variety, and my friend Rita K Sanders, the editor, was singled out in particular for her quality work – “expertly edited by Rita K. Sanders.” Go girl! Your momma be proud.