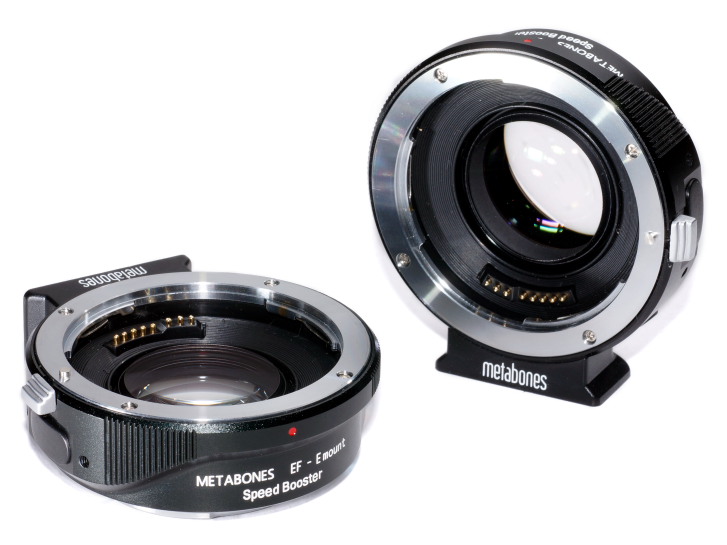 It increases maximum aperture by 1 stop (hence its name), increases MTF and has a focal length multiplier of 0.71x. For example, the Canon EF 85mm f/1.2L II lens becomes a 59mm f/0.9 lens on a Sony NEX camera, with increased sharpness. The faster F-stop allows for shallow depth-of-field and a lower ISO setting for decreased noise.

The optics of Speed Booster is designed by Brian Caldwell, PhD, a veteran of highly-corrected lens designs such as the Coastal Optics 60mm f/4 UV-VIS-IR APO Macro lens with exemplary MTF performance (focusing done with visible light requires no correction whatsoever for the full spectrum from UV to IR).

Speed Booster serves double-duty as a lens mount adapter, from Canon EF lens (but not EF-S) to Sony NEX, with auto-aperture, image stablization, EXIF and (slow) autofocus support for late-model (post-2006) Canon-brand lenses. It will be available in January 2013 from Metabones' web site and its worldwide dealer network for US$599 plus shipping and applicable taxes and duties.

Other mount combinations will follow shortly afterwards. Leica R, ALPA, Contarex, Contax C/Y and Nikon F (with aperture control for G lenses) will be supported, as will Micro 4/3 and Fuji X-mount cameras. Support for other mounts will be added in the future.