How to use new Audio features

According to the What’s New Document the list of new stuff in MC7 is 25. I think we can whittle that down a bit by eliminating all of the ISIS-related ones (most people are not on ISIS, though those who ARE on it certainly will find them all critically useful), combining a few similar ones and dropping some other little used ones. My list of the Top 10– in MY order of importance – would be:

1. Editing High Resolution Media – FrameFlex ™ allows you to work with the full resolution of 2K, 4K and higher media, including reframing that media
2. Audio Improvements – The new mixer is pretty sweet plus Adjusting Clip Gain in the Timeline and Waveform caching. That’ll be the subject of today’s post.
3. Background Transcode/Consolidation – frees up the Avid editing app during the tedious process of transcoding and consolidating
4. Consolidate/Transcode ONLY AMA clips – this is a huge workflow improvement and goes along with AMA Timeline Clip Color
5. Color Management – Allows use of customized looks via CDLs (color decision lists) and LUTs.
6. Dynamic Media Folders – letting you automate ingest of media outside of the editing app
7. AMA Managed Folders – Avid is great at media management, but this did not extend to AMA until now
8. Alpha support for AMA QT clips – which is self-descriptive
9. Spanned Markers – already discussed in previous post
10. Timeline Navigation changes – use of “vertical scrolling” and mouse wheel

Clearly, other editors will flip some of the order of this list around. In actuality, this list order is more about what I see myself using in the future than what I currently use. For example, I don’t currently have any 4K media. I don’t have any media that uses a LUT. So my current order might be more like: 2, 4, 3, 7, 6, 9, 8, 10, 1, 5. Depending on what your workflows are and what kind of media you work with, your list will be in a different order. And if you work on an ISIS, clearly all of the ISIS stuff could be at the very top of the list.

Let’s check out the Audio Mixer and Timeline audio improvements.

Starting with the mixer:

The first thing you notice is that the new mixer doesn’t bother showing you faders for tracks that don’t exist. The timeline feeding this mixer is two tracks. With pre-7 mixers, a two track timeline would have two additional “blank” tracks in this configuration. The other important addition to the MC7 mixer is the Master Fader. The Master Fader also allows you to see a “VU meter” for the full stereo or surround mix channels beside it. To me this means that I rarely have to open both the Audio Tool and the Audio Mixer.

The Audio Mixer also gets the full “Avid customizability” treatment. Instead of providing a one-size fits all solution, Avid allows you to right-click on the Mixer and toggle a number of displays to save screen real estate or visual clutter. 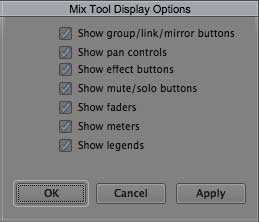 Avid lets you take this to the extreme, even eliminating sliders, which would seem to be the heart of any mixer, but there are some editors that prefer to set levels numerically or perhaps with an external physical fader device. So if you’re on a laptop and need fader control in a compact package, turn it all off and still have some kind of control. 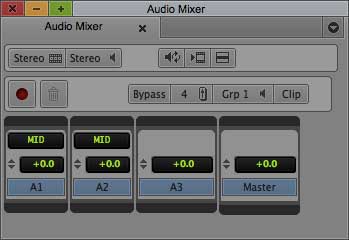 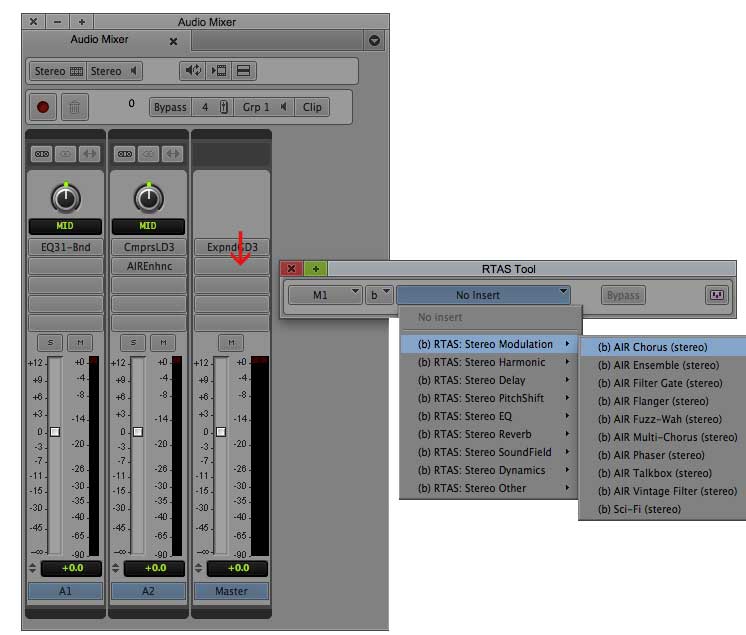 Applying RTAS effects to the tracks is as simple as clicking on one of the gray rectangles (indicated by the red arrow) and selecting the effect from the pulldown menu in the resulting RTAS Tool. The RTAS Tool also gives you pulldown menus to change the track (including the Master) and which “insert” (gray RTAS box) you want to apply the effect to. The order of RTAS effects does make a difference sonically because the effects at the top of the track apply downstream to the effects below them. And the effects in the Master track will be applied downstream of the individual track effects. 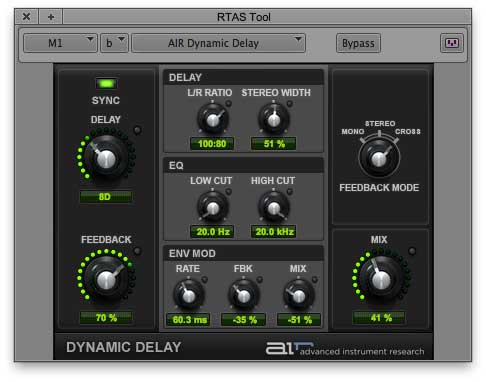 The RTAS Tool also provides an effect icon (purple “plugin” icon in the top left of the Tool) that you can drag to a bin or to another RTAS “insert.”

The Master Fader also has its own Mute button in case you’re working on a two hour Fran Drescher special.

One of the other cool things that was added to the audio functionality of MC7 is the ability to adjust levels in the timeline with much more precision thanks to the addition of a little “mini-slider” that can be viewed on every clip in the timeline. 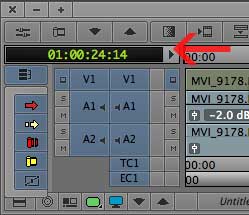 To turn on this capability, first expand the Track Control Panel using the little right-facing arrow next to the timecode number in the timeline. 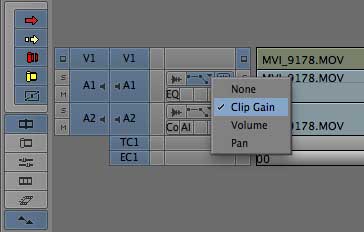 Then, in the expanded Track Panel, click on the Clip Gain/Pan Control (looks like rubberbanded keyframes). Choose Clip Gain from the pulldown menu. This adds little “mini-slider” icons to all of the clips in that track.

You can now click on the mini-slider icon on any segment in the timeline to control the level using the fader that appears next to it, or you can click and control the volume with a numeric entry that can include decimal points for incredibly precise control if you want it.

Note: The RTAS effects that I set up in the new Audio Mixer also appear in the RTAS “boxes” in the expanded Track Panel. And, be careful with RTAS effects in the Master track. I dropped them on as a test and forgot about them and as I added a bunch of new cuts to my sequence, I was trying to figure out why everything had an echoey delay to it… duh! That was the effect I’d added to the Master Track!

Clearly, this is one of those things that you probably will want to set up a Timeline View for because the visual clutter of all those little sliders is simply not necessary most of the time. If you’ve never saved a Timeline view, let me walk you through that: 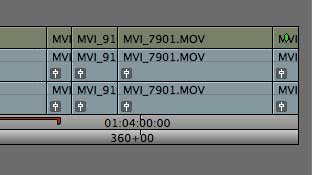 With all of your sliders (Clip Gain) turned on your tracks, go to the little pulldown menu at the bottom of the timeline, near the left side. It will either say “Untitled” if you haven’t added any Timeline views yet in the current User Setting, or it will have the name of the current Timeline View. 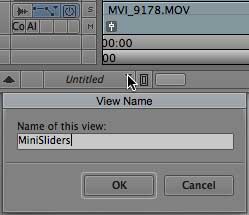 When the View Name dialog comes up, save the view as “No mini-sliders” or something like that. Now you can switch between functionalities at the click of the Timeline View button!

Avid also made some changes to the Audio Settings. The monitor volume used to be in the Audio Project Setting’s Output tab, but it’s been moved to Audio Settings. It also now retains whatever level you set it at even after shutting down the app. The bad news for almost everyone is that this new functionality does NOT apply to software mode or if you are using a third party I/O device, like a KONA card.

And last but not least (not least by a long-shot), is cached audio waveforms in the timeline. This is a huge timesaver. What surprised me is that when I added new audio tracks, there wasn’t an initial delay as the waveform was at least drawn the first time. The waveforms were there as soon as the new audio was cut in. Pretty awesome.