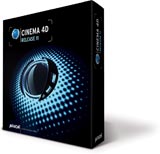 “MAXON has spent the last 20 years developing some of the industry’s most advanced 3D software technologies; continually raising the bar for 3D animation software excellence,” said Harald Egel, CEO and co-founder, MAXON. “CINEMA 4D R11 is no exception. This release contains the next-generation features our customers worldwide have come to expect from MAXON.”

Expanded integration options, new workflow tools and boosts in performance for both PC and Mac users sit at the heart of the new release. On average, rendering speeds are now more than twice as fast as the previous version. CINEMA 4D R11 also boasts an all-new Cocoa-based architecture supporting 64-bit processing under Mac OS X Leopard. “We are pleased that MAXON has created the CineMan connection to Pixar’s RenderMan directly from within CINEMA 4D,” said Chris Ford, Business Director – RenderMan at Pixar. “Now, MAXON customers can benefit from Pixar’s Academy Award-winning rendering technology featured in Ratatouille, The Incredibles and many others.”

“Our customers told us what they needed and we listened,” said Paul Babb, president and CEO of MAXON USA. “This exciting new version is as ideal for the novice as it is for the power user who wants to produce compelling imagery in today’s fast-paced environments.” 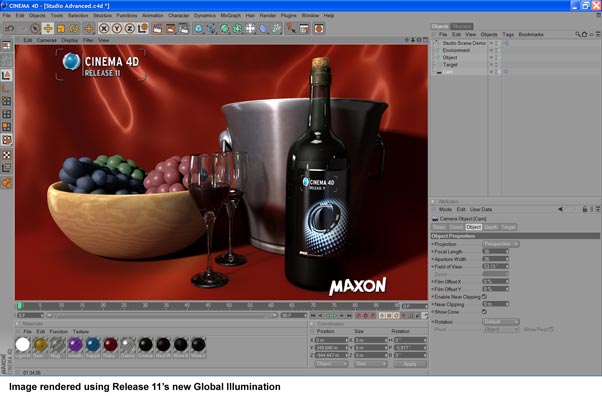 The list of capabilities and enhancements that comprise the new CINEMA 4D R11 is extensive; with each element designed to provide ultimate control to enhance the professional 3D modeling, texturing, animating and rendering process:

Take advantage of the most current algorithms and computer hardware with the all new easy to use Global Illumination engine. This technology delivers heightened flexibility to achieve ultra-realistic results with a minimum of setup time, even for animations.

New tools for painting rich, detailed textures onto a 3D model as well as an improved workflow are part of this major upgrade to the popular 3D painting application. The improvements facilitate even tighter integration into industry-standard painting pipelines with brush import, WACOM tablet support, PSD format enhancement and more.

CINEMA 4D R11 is the first comprehensive 3D package completely re-engineered to take full advantage of the Mac OS X 10.5 release. As a native 64-bit Cocoa application, CINEMA 4D can be used in 64-bit mode to utilize greater RAM resources so you can build and render more complex projects. All 64-bit processors are supported. Users can easily switch between 32-bit and 64-bit mode to suit their individual needs.

R11 now supports COLLADA, an open standard XML-based format that facilitates the transfer of 3D assets between applications. Exchanging scenes with other 3D applications is now easier than ever for diverse digital content creation production pipelines.

An online update mechanism ensures users always have access to the latest updates and enhancements. A new license server technology helps corporations, studios and schools maximize and manage their investment.

Extensive CINEMA 4D R11 tutorials and demonstrations can be found on the MAXON USA. 24/7 education and training resource site, Cineversity.