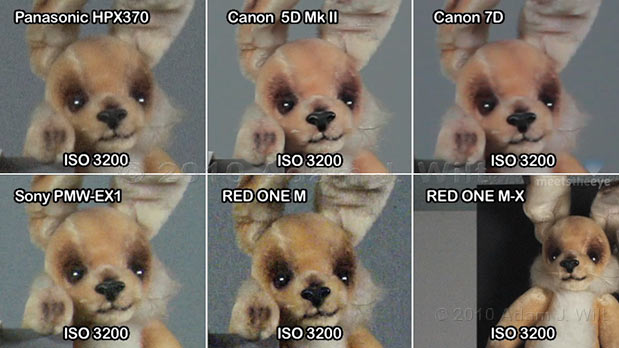 The blogosphere is all a-twitter (and the twitterers are all blogging) about how good HDSLRs are in low light. I thought it would be interesting to compare the Canon 5D Mk II and Canon 7D with a couple of video cameras as well the RED ONE M and M-X, and see just how well they all perform at high ISO settings.

To that end, I set up a simple test scene with a DSC Labs Chroma DuMonde chart to look at grayscales and color responses; a Kodak neutral gray card to serve as a flat field for observing noise, and Barney Bunny as a stand-in fleshtone and detail subject. 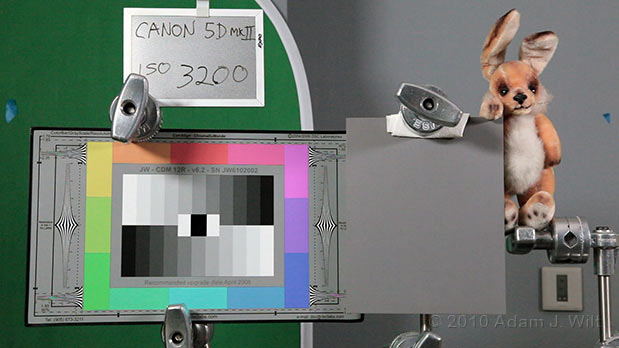 My goal wasn’t to compare the cameras at equal reported ISO settings, since the RED’s internal readings don’t agree with external meters. Instead, I set each camera to a comparable exposure setting, e.g., 1/48 sec at f4 for ISO 400, and used each camera’s ISO or gain setting that would give me the appropriate signal level in the scene.

I measured the light with a Spectra Pro IV incident meter and a Gossen Starlite incident and reflected meter, and verified that the two Canons, a Sony PMW-EX1, a Panasonic AG-HPX370, and a Nikon D90 agreed with those meters’ reading of the scene—they all did, within 1/3 of a stop.

I then recorded the scene with the two Canons in 1080/24p mode, setting the ISOs in full stops from 400 through 12,800 (H1), and halving the exposure with each stop change. Both cameras has High ISO Noise Reduction turned off. The base exposure on the Canons was 1/50 sec at f4, since the cameras didn’t offer 1/48 sec.

I used a RED ONE with the original Mysterium sensor running build 30 firmware, shooting in 4K HD mode, and downsizing to 1080p in post. The camera was set to twice the ISO rating of the handheld meter to get an image to the other cameras; the Mysterium’s ISO rating is consistently a stop slower than what I measure with external meters. Thus the “ISO 400” shots are made with RED set to ISO 800, for example, to get the appropriate levels for 1/48 sec at f4.

(If instead I trusted the RED, and recorded dark clips which I then brightened a stop in post, I got comparable results as far as noise goes—so even if I shot the RED at its nominal ISO rating and fixed it in post, the end result wouldn’t be substantially different).

I took RED ONE Mysterium-X footage from another test. Even though the scene differs, the same elements are present, albeit at a different magnification. Since I’ve found that the M-X sensor is about half a stop slower than an external meter would indicate, I chose its clips with a 1/3-stop faster setting: ISO 500, 1000, 2000, and 4000, or about 1/6 stop off of the ideal exposure. Since I didn’t have an ISO 8000 clip, I used the ISO 6400 clip, thus cheating by 1/2 a stop for this one setting.

The RED shots were transcoded to ProRes444 in REDCINE-X, and the native clips from the other cameras were used as-is: h.264 from the Canons, AVC-Intra 100 from the HPX370, and XDCAM EX from the EX1. All the clips were brought into Final Cut Pro 7, and roughly graded to equalize levels, gammas, and color balance, just as if I had to match the cameras to generate dailies on a low-light shoot.

I matched color balance in the ISO 800 shots from each camera, then applied that balance to the rest of that camera’s shots, so you’ll see some colors shifting as ISOs increase; in real life, you’d balance each shot as best possible—but I was interested in seeing what happens to color rendering, as well as noise levels, as sensitivity is changed.

Let me emphasize that this isn’t a perfect comparison; I didn’t do this to look at all aspects of camera performance, only the build-up of noise and the shift in color rendition as ISO increases. I didn’t try to match the various cameras’ sharpness levels, nor did I always match ISOs precisely, as mentioned above. This is just a casual comparison of six cameras as the light level drops, nothing more.

Here are pixel-for-pixel details from the ISO 3200 test, the highest ISO rating shared by all the cameras: 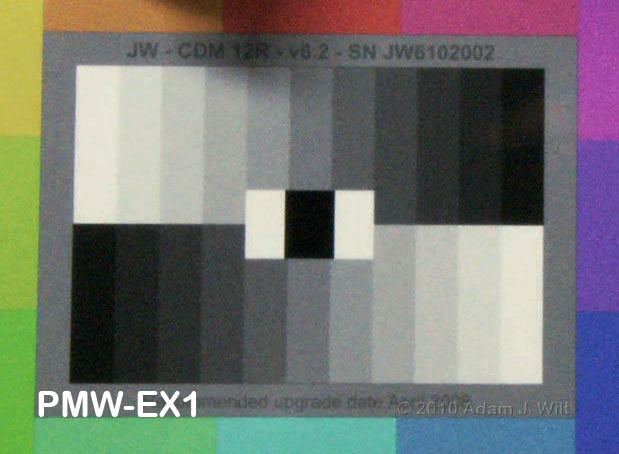 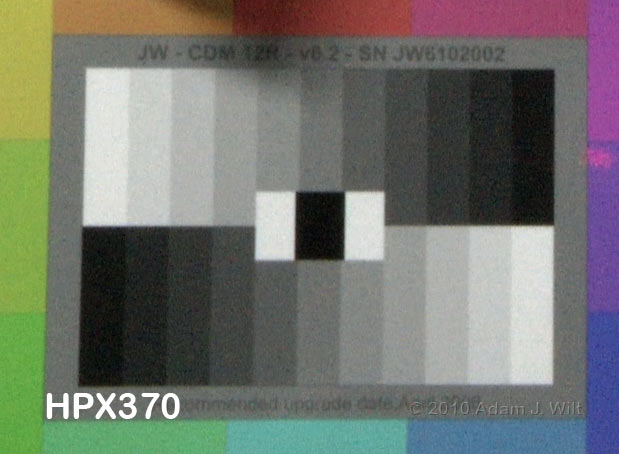 Note: both the EX1’s and the 370’s images shows considerable diffraction softening from the f11 aperture used at ISO 3200. The 370 normally wants apertures wider than f4 for optimal sharpness while the EX1 is happiest at f4.8 or wider. This is a noise and color test only; don’t look at these pix for sharpness comparisons. 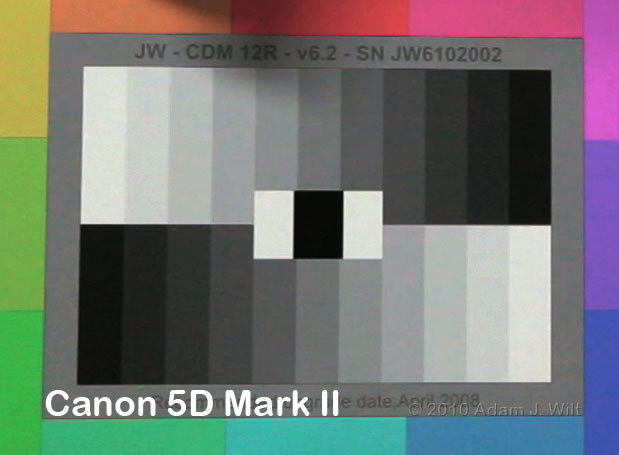 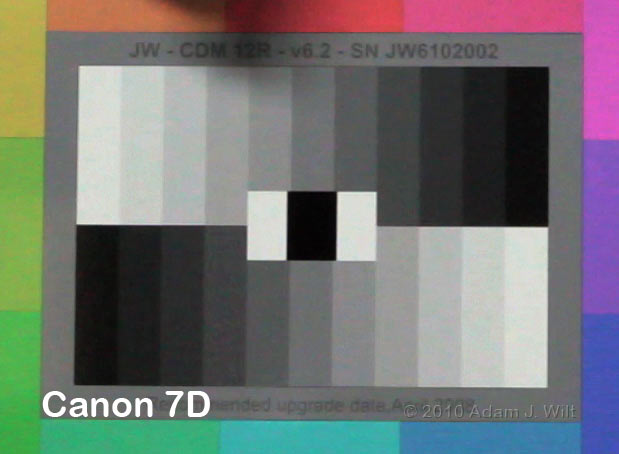 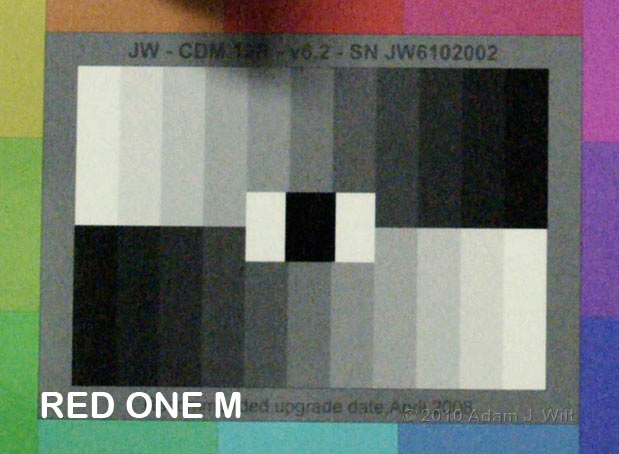 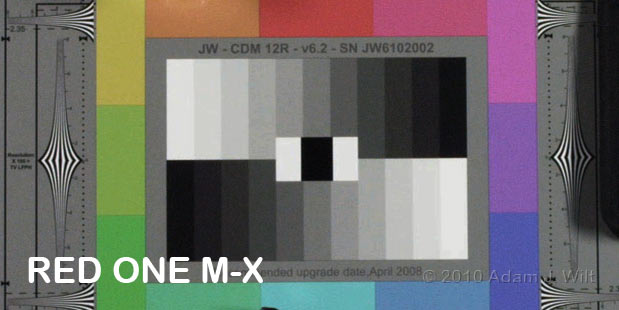 I also have a pixel-for-pixel comparison clip here, running through all the ISO settings I tested.

Big sensors make a difference. Both Canons do outperform the traditional video cameras at high sensitivities—but so does the upgraded RED ONE with the Mysterium-X sensor. And the RED holds more fine details and subtler gradations at high ISOs, too.

Even at low ISOs, the quantization and compression used by the Canons tend to flatten and posterize gentle gradations, like those on the pop-up greenscreen behind the DSC chart in the test scene, while the other cameras show a more finely-textured surface.

As is so often the case, there’s no clear winner: only interesting tradeoffs!

16 CFR Part 255 Disclosure
No material connection exists between me and any of the companies mentioned in the article. I did this test with cameras and equipment already at hand; the HPX370 was on loan from Panasonic for review, while all other cameras and test equipment had been purchased on the open market.