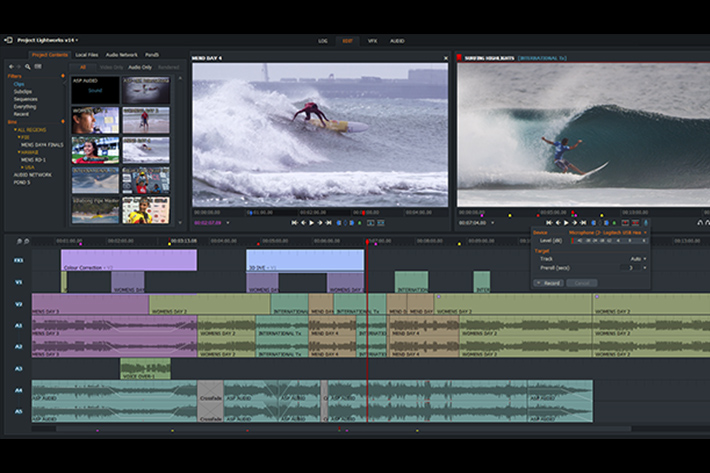 Announced last December,  while still in beta version, Lightworks 14.0 offers a more intuitive and easy to learn layout, while still maintaining the classic Lightworks style, for those who prefer it.

Times they’re certainly changing, and the landscape of video has changed dramatically in recent years. So much, in fact, that EditShare felt the need to adjust its venerable NLE to attract a new generation of users. Announced last December, the new Lightworks 14.0, at beta at the time, promised to be a chameleon; a new “fixed” UI giving access to the classic tools for new users, and the original interface for editors used to the legacy UI, a switch accessible through flicking a button.

The final product is now available to download and try.  Reinvented for modern productions, as EditShare says, “Lightworks 14.0 gives the next generation of social content creators and digital marketers a purpose-built video editing package with integrated premium audio and video content from Audio Network and Pond5.”

“Lightworks 14.0 is providing next generation video makers a powerful tool for crafting video projects destined for any platform, whether it’s Facebook 360, YouTube or Instagram – even traditional television – without disturbing the heritage editing capabilities that have made Lightworks a much-loved system across some of Hollywood’s most notable editors,” states Matt Sandford, Lightworks product manager, EditShare. “Plus, with the addition of royalty-free content accessible from the NLE, we are allowing media creatives and at-home video makers alike to stand out from the crowd with polished content – completely necessary in a world where video is overwhelmingly dominant on the web.”

As video becomes the most popular form of communication in the age of the internet, more and more people are becoming content creators, seeking out a simple, yet powerful editing solution. Lightworks 14.0 has the answers; out of the box, it comes packed with audio and video FX tools for fine tuning and polishing video content, allowing users to import, edit, add VFX and voice overs, and deliver great video in all the formats one needs, particularly for social video platforms YouTube and Vimeo. With extensive support for GoPro camera formats, it’s never been easier to create epic sports content and slow motion drone footage that can be mixed with video captured on a range of cameras, including mobiles.

For video makers who need professional codec support and the ability to edit and export media up to 4K, Lightworks has it all, including a new proxy workflow to ease editing in higher resolutions. And for those just breaking into the craft of editing, EditShare offers a free version of the NLE that packs all the tools and only limits the final output format.

EditShare will be at NAB 2017 in Las Vegas, so expect to see Lightworks 14.0 on show there. Lightworks 14 is available in either the Free or Pro version. Download Lightworks 14 for free now, or purchase the Pro version as a month, year or outright license.