I want applications that get out of my way and let me work. That includes lighting diagrams. This is what works for me…

I don’t have a lot of time to learn new software packages, so I tend to fall in with packages that don’t require me to read the manual. That’s why Omnigraffle works for me.

I’ve been working with computers since the third grade, so I know a thing or two about them. Having said that, though, I wouldn’t say that I’m a computer expert–I’m more of an interface expert. I can figure out how to use just about anything if the interface is reasonably well designed, and the better designed it is the more likely I am to use it.

I sat down and figured out Final Cut Pro pretty quickly, and while I’m not a power user I was able to figure out enough in an hour to get me through numerous showreel edits. When it came to lighting diagrams I wanted something as easy and intuitive. 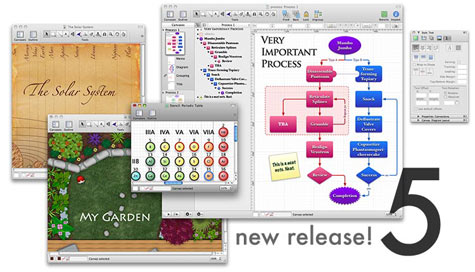 Omnigraffle is as simple as dragging and dropping, and like DVD Studio Pro’s interface it helps you align objects on-the-fly by showing dynamic guides that anticipate what you might be trying to do at any given moment. I’ve found a couple of film/production templates that I use over and over again–and those are what I used to create the lighting plots in my previous article.

If it takes a long time and a steep learning curve, I’m not going to use it unless it really gives me power over something I need to do urgently. I don’t have time for a lot of that. If you’re on the Mac you could do worse than to check it out. (If you’re on a PC you have other, more urgent problems to deal with.)

The price is right, especially the bulk pricing which is very cost-effect at allowing you to run it on your home computer and several laptops, as I do.