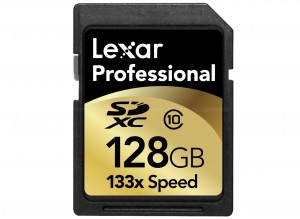 In the run up to the CES show in Las Vegas this week Lexar has released details of the worlds first 133x 128GB SDXC card. $699.99 MSRP in the US. Full press release after the jump!

“The professional photography industry is at a point where digital photo- and video-capture methods are converging, meaning that professional shooters need a memory solution with the versatility and reliability to safely store both photos and videos,” said Pachi Chen-Wong, senior product marketing manager, Lexar Media. “The 64GB and 128GB Lexar Professional 133x SDXC cards combine high-speed performance with large capacities to offer solutions for professionals who shoot large volumes of high-resolution images and HD video.”

The Lexar Professional 133x SDXC memory cards are compatible with all SDXC-enabled devices. The cards include the latest version of award-winning Image Rescue software to help recover lost or deleted photo and video files. Professional photographers can now capture, store, and manage more of the photo and video content critical to their livelihoods.

Lexar Professional 133x SDXC cards provide consumers with the quality and reliability they have come to expect from Lexar Media. All Lexar product designs are tested in the Lexar Quality Labs, a group of facilities where all Lexar product designs undergo extensive testing to ensure performance, quality, compatibility, and reliability with more than 800 intended digital devices.