After being introduced to the business by his father Dan Dome started working as a tape operator at a post-production house when he was 20 years old. By age 21 he was editing professionally at a time when computer-based editing was just coming on the scene. He learned all facets of editing, from creating promos and editing shows to cutting music videos and creating flashy highlight reels, by working with many clients, including Broadway Video, MTV, VH1, MSNBC, NBC, and NBC Sports.

After being introduced to the business by his father Dan Dome started working as a tape operator at a post-production house when he was 20 years old. By age 21 he was editing professionally at a time when computer-based editing was just coming on the scene. He learned all facets of editing, from creating promos and editing shows to cutting music videos and creating flashy highlight reels, by working with many clients, including Broadway Video, MTV, VH1, MSNBC, NBC, and NBC Sports.

Adobe: Tell us about your time working for NBC in the early 2000s.

Dome: It was an eye opening and fun time. I was lucky to have a diverse foundation to draw from to help with all of the facets of post production. I cut remote packages for Late Night with Conan O’Brien, put together pre-taped bits for Saturday Night Live, and did show composite work for both shows. Everyone wanted to work on those shows; I think having a diverse foundation to draw from set me apart from the rest of the pool of editors.

Adobe: When did you make the move to Los Angeles?

Dome: I moved out to Los Angeles to work on The Tonight Show with Conan O’Brien, which was an incredible experience. I helped design the workflow and lay out the SAN folder structure. The Associate Director and I were on the same page and everything worked great getting the show on the air. When Conan moved on, I was lucky to be a part of his comedy tour, working on the pre-taped bits, and then I designed the post production workflow for his TBS show.

I was in Los Angeles for five years but I missed New York. I heard that Jimmy Fallon was taking over The Tonight Show and Seth Meyers was taking over Late Night. So I moved back to launch yet another late night show. The great part about it was that we were going to start the show on Premiere Pro. I felt like Premiere Pro could do what we needed to do in a familiar interface and a familiar style of media management on a SAN. We were the first late night comedy show to launch on Premiere Pro, which is kind of a big deal. 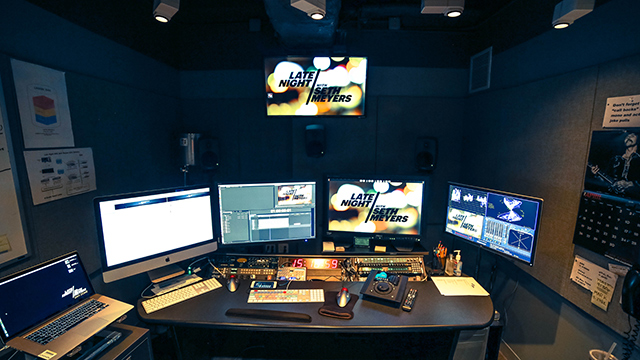 Adobe: How did you collaborate with people on other shows at NBC Universal?

Dome: I’d worked on Saturday Night Live before, so it was good to be able to talk to the Associate Director of Post Production and editors about their workflows with Premiere Pro. I had my own ideas of what I wanted to do, but knowing they’d been using it for a while was nice because we could share ideas and approaches. It was exciting to deliver a show with Premiere Pro. Of course, not everything was perfect, but part of how you set yourself apart from being okay to being someone who everyone thinks is great is dealing with those issues when they come up, figuring out workarounds, and still delivering the show as everyone is expecting it.

Adobe: What type of content do you create for the show?

Dome: We do pre-taped bits as well as theatrical show composites. I’m the associate director and lead editor and I work with one other editor and an assistant editor. One priority was figuring out how we were going to use Premiere Pro, Prelude, After Effects, Photoshop, and Audition as part of our workflow to get the remote pieces put together and the show delivered, both looking and sounding great. We prepared three separate Premiere Pro templates, one for editing the remote packages, one for editing the show, and one for creating the show open. I built the templates and tested them to make sure the control room liked them, and they did. Creative Cloud has been working out really well for us. 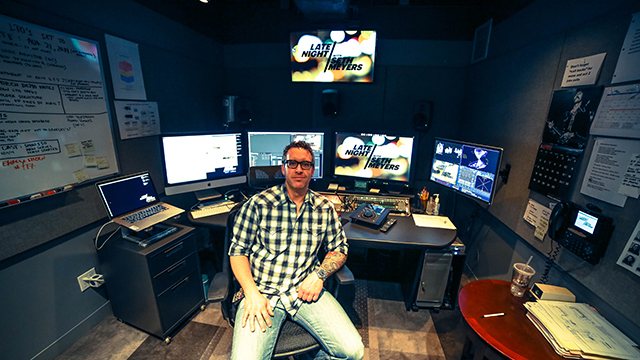 Adobe: What are some benefits of working with Creative Cloud apps?

Dome: We take advantage of Creative Cloud for editing and graphics work on the editorial side. Our graphic artists are all over Illustrator, Photoshop, and After Effects. Our assistant brings in all of the remote media through Prelude so he is able to put markers in clips for us and organize the projects. On the audio side, the fact that Premiere Pro is able to collapse all audio stems and give us one 5.1 audio track when we’re doing our edits of the show or other pieces of content recorded in the studio is really great.

It’s really nice to be able to do everything within one world. We also love plug ins and have Sapphire, Red Giant, and use Video Copilot for some After Effects work that we do, such as adding optical flares or Element 3D.

Adobe: Tell us about your daily workflow.

Dome: Our editors start at about 11 AM, prepping pre-tapes that may roll into the show that night or later in the week. When I come in my first priority is getting the show open delivered. After meeting with the post-production supervisor to review what’s expected for the day, we have a rehearsal around four o’clock. Sometimes there are changes to material and we have to hustle to get those turned around as quickly as possible. We’re usually in a good place to deliver the final product and we know early on what we can realistically pull off. 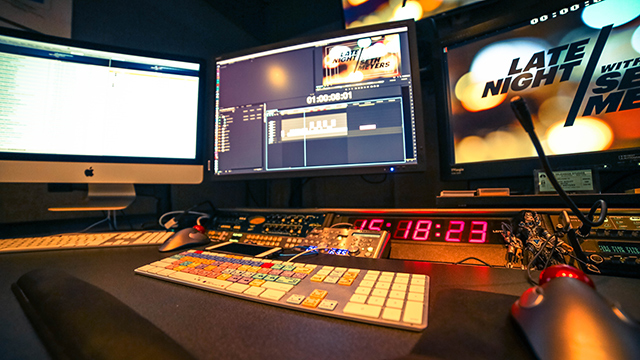 Taping of the show starts at 6:30 PM. We ingest seven cameras as well as a program feed, which I use as my foundation for the actual composite of the show. When the show is finished recording our goal is to have each of the six acts laid out in their own timeline. For act one the timeline starts at one hour, act two starts at two hours, and so on. That’s a trick a mentor of mine showed me that keeps the timeline timecode numbers easy to manage.

I save three versions of the show and the editor, assistant editor, and I edit different acts. We export the finished acts as ProRes 422 @ 29.97fps with 5.1 audio out of Premiere Pro and do quality control in AJA Control Room to make sure it’s an A+. The first act and the timing of the show is due to the network by 10:30 PM at the latest because that’s when the show composite happens.

Adobe: Why do you love what you do?

Dome: All of the jobs I’ve had have always been a whole lot of fun and a whole lot of hard work. That’s what I love about this business, you can have a great time and you get the adrenaline rush of trying to get something on air. That applies to Conan, The Tonight Show, Saturday Night Live, and Late Night with Seth Meyers. And it’s even better when everything happens the way it should!