Portable fun for all seasons and useful for artists and prosumer filmmaking too!

I’ve been using data projectors for years for more than just PowerPoint presos or training, and when the Kodak Luma 400 HD Smart Projector came to me to review, I tried lots of various uses to see what it could handle. I’m pretty impressed with it’s 200 ANSI lumens capability off BATTERY POWER and the smart features/WiFi & smartphone connectivity make it truly portable and useful in many scenarios.

Don’t be fooled by its size – this little dynamo that fits in the palm of your hand can really put out for the price point. 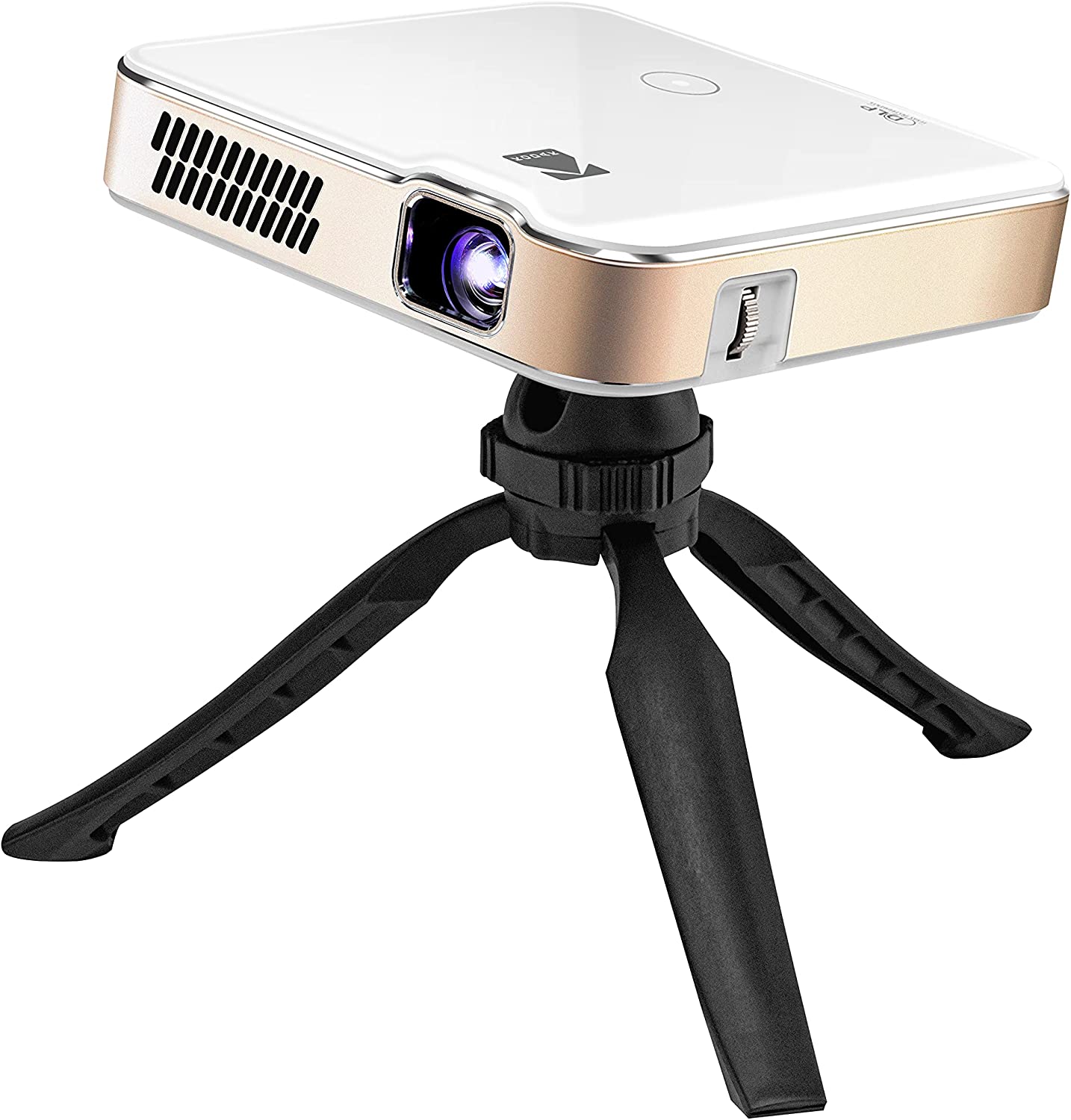 Bring all of your entertainment with you using this travel ready, easy-to-use smart projector. 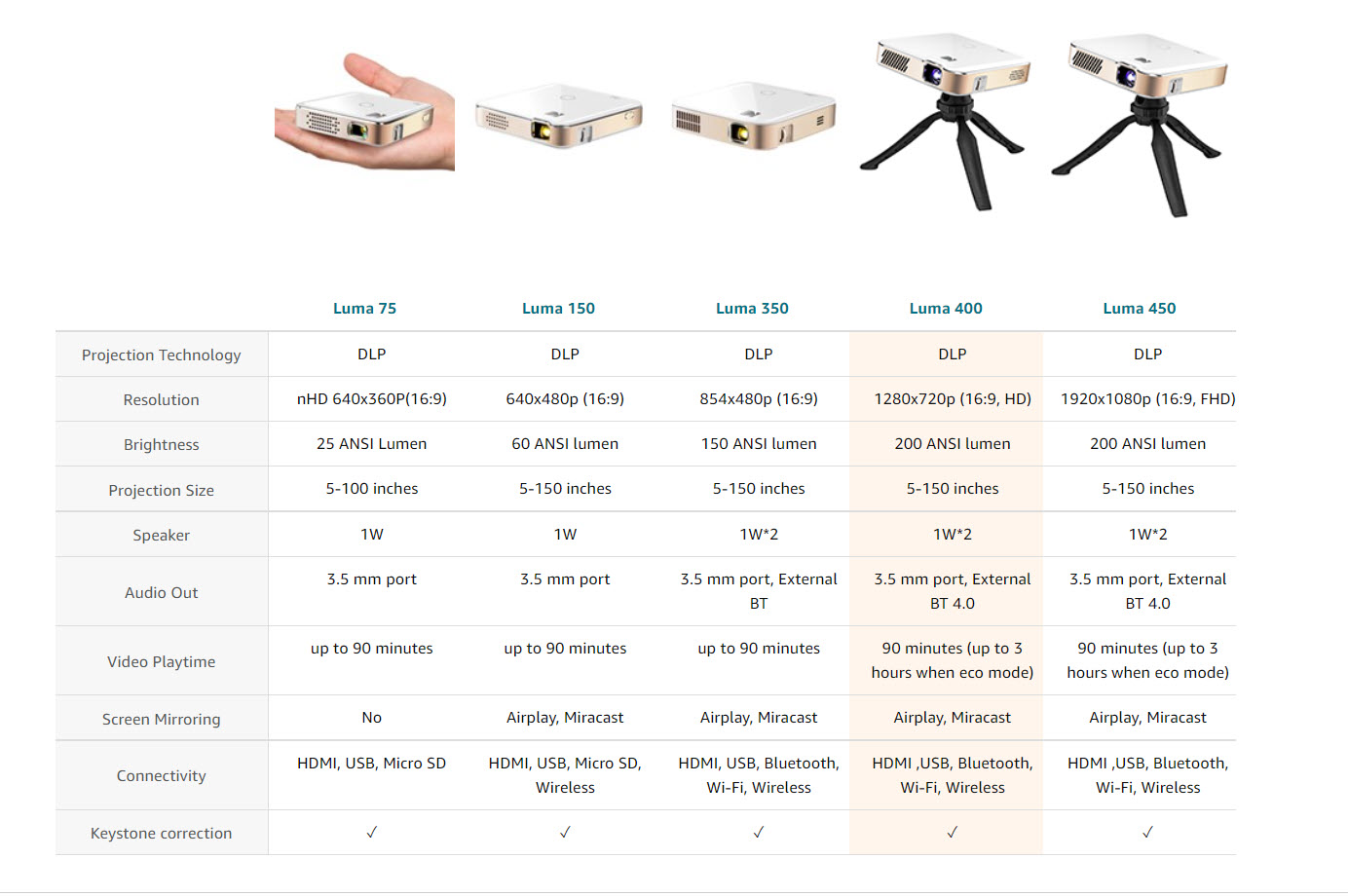 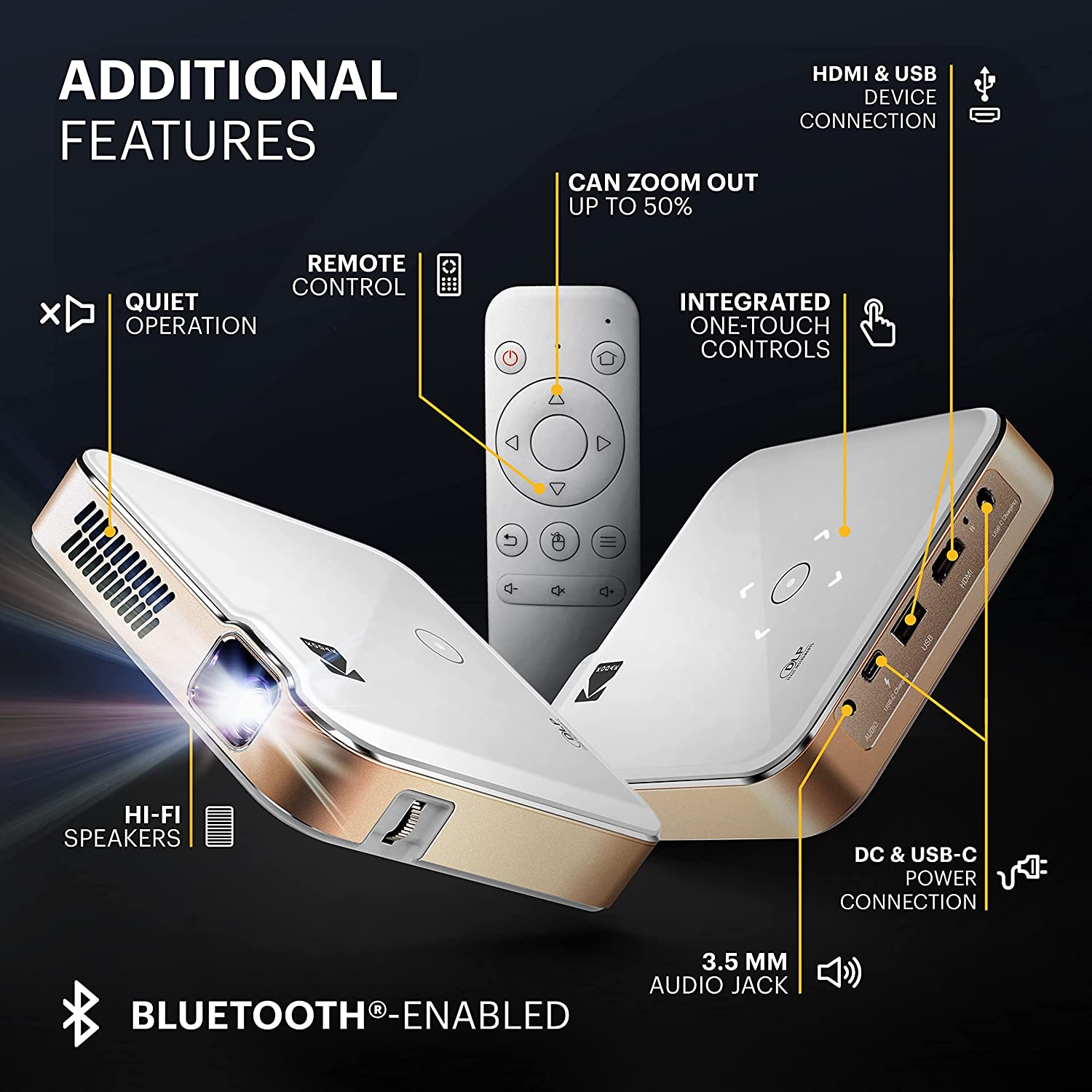 At first, I just played with this projector as one might just to see where/how it would work on its own, using the built in Android UI and installed apps over WiFi. Where could work and how long does the internal battery charge last?

As long as you’re in range of your WiFi connection, it works like any portable Android device should. What’s cool about this projector is you can be connected to WiFi streaming video content while also using Bluetooth to connect to your audio, like I do with the JBL FLIP 5 portable speaker. Both of the devices are rechargeable and portable (the FLIP 5 is also weatherproof/waterproof).

I found the battery charge lasts surprisingly longer than expected for such output. Usually over 2 hours when I’ve actually let it run out completely. But you can use a USB charging brick or the included DC power connector for indefinite/long-runtimes.

Combined with the portable audio, you could literally use this anywhere – even camping trips, etc. provided you have a USB thumb drive with media if you’re not in range of a usable WiFi. And since it’s small enough to easily fit in your backpack or laptop bag, you can take it anywhere without thinking about it. Of course you can hook it up directly to any laptop or other media player though HDMI or USB. 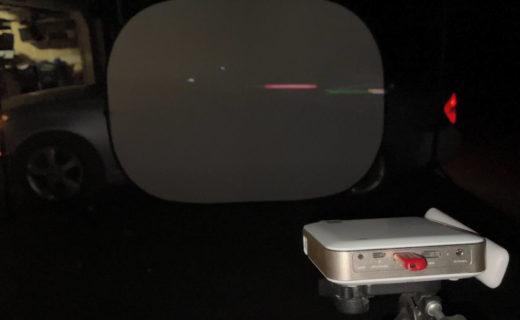 I’ve found it’s easiest to load up a USB Thumb Drive with my media and use the built in Android Movie Player app to run videos directly, while maintaining wireless portability.

As in this test, I had recorded some video footage with the GoPro HERO11 Black mounted to the driver’s side of my car and drove around our rural roads for a bit at night to capture lights and cars passing on that side of the road.

I then brought the footage back home and cut a section out to put on the USB drive and opened it up on the Luma 400 and set it to REAR PROJECTION mode. 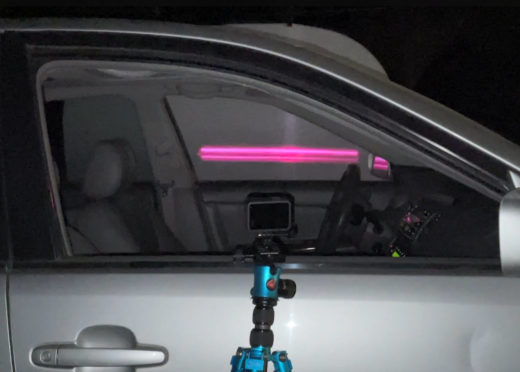 I then set up portable white scrim on the drivers side of our other car in the driveway to simulate a projection back plate, that I could shoot from the other side of the car with the GoPro, and capture myself “driving” at night! I know there are times a lot of prosumers and students may want to try this method for their small film projects, and I was really quite happy with the results!

What I learned from doing this though, is NOT put the projector directly in line with the camera shooting toward it, as you will see the projection “bloom” on the screen and it causes a vertical band which you can see in the video example below. I also would dodge more of the ambient or portable lights to be sure there’s no spill onto the screen so it can be as dark as possible. 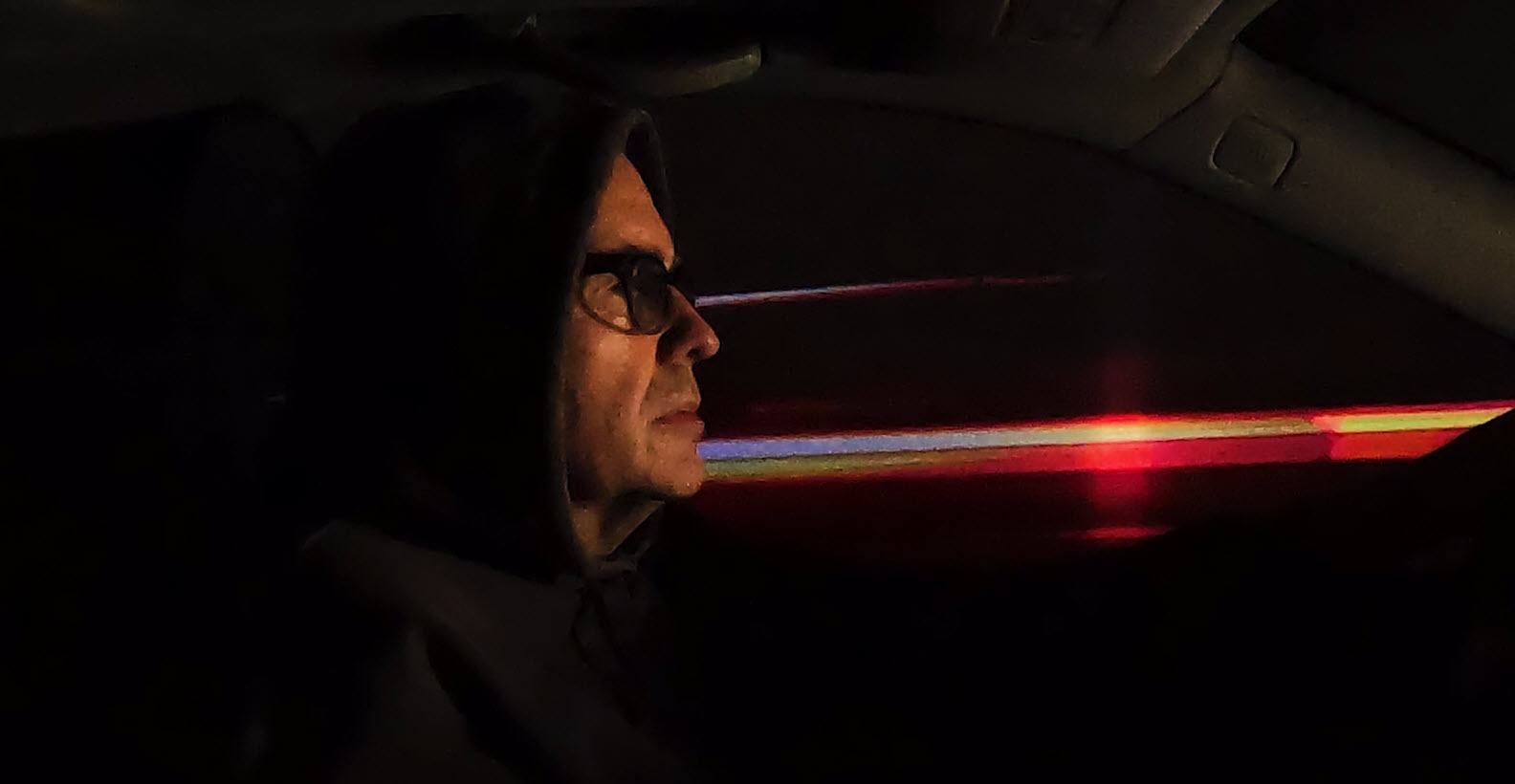 We are fortunate enough to live out in the country with very little spill over lights, but you could do this easily in a large garage or small warehouse anywhere. I would also use a different camera to capture this scene other than the GoPro if I were shooting an actual film, but just to keep things as simple and basic and lo-fi as I could to test this concept, I’m pretty pleased with the results.

With the holidays upon us, what better way to greet your guests than with some fun festive projections on your walls or rear-projected into your windows? 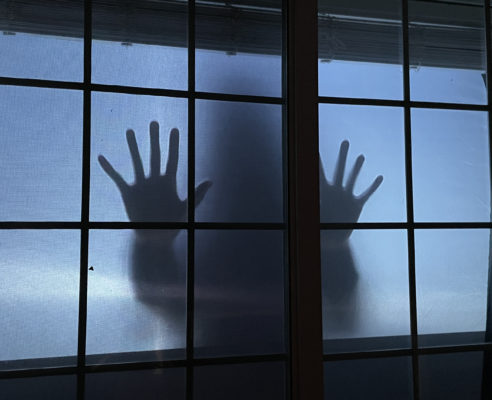 I first tried some exterior wall/garage door projections, but it has to be really dark for them to appear very well, and let’s face it, 200 Lumens isn’t really bright enough to stand up to wide surfaces. It does, however work well for rear-projection into your front windows.

Placing my portable scrim screen in a window and projecting behind it provided really good results if the exterior lights are off. (perfect for Halloween or Christmastime). 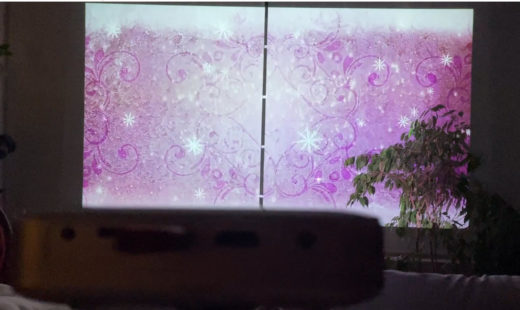 We also have pull-down window screens for our front living room window which served well to project onto for the full 12 ft width. Using the JBL FLIP 5 with the projector can provide the soundtrack for the projections to greet anyone who comes by.

As you’ll see in this video, I first set it up to project on the front corner of our house just to see how visible it would be onto a wide space. Other than not being designed for the angles of the building it was projected onto, it was stull pretty effective.

The window projections, however, were much better.

While I was testing this process in our front window and the Christmas scenes came on in mid-October, my wife decided it was too early for that nonsense and decided to “spooky-up” the scene getting in front of the projector! 😀

Being so incredibly portable, there’s really an endless amount of uses you could find for this fun pocket-sized projector. 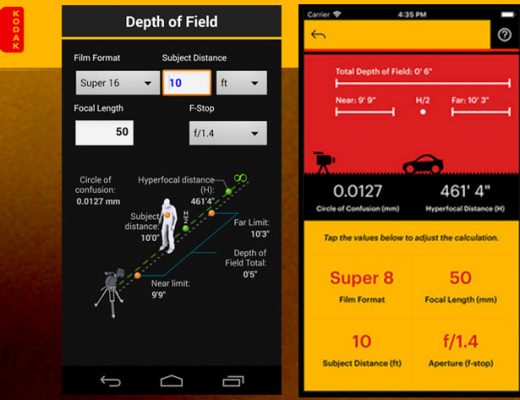 Whether you need to calculate depth of field, how much film you’ve left for a sequence or check the... 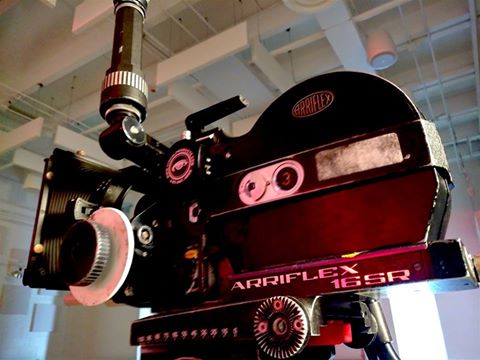 In a dark abandoned home, the late afternoon sunlight broke up the darkness inside and lit up the copious...