JVC Professional Products Company, a division of JVC Americas Corp., today announced the DT-X71 Series of portable ProHD LCD monitors. Ideal for field and studio applications, the new seven-inch AC/DC monitors offer 1024×600 resolution with a 160-degree viewing angle – and can display 480i, 480p, 720p, 1080i, and 1080p video signals at a variety of frame rates. 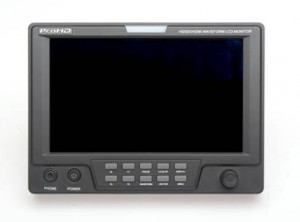 There are three models in the DT-X71 Series, with scaled I/O options and features for specific needs. The basic DT-X71C model offers one HDMI and one composite video input, while the DT-X71H adds two HD/SD-SDI inputs and an HD/SD-SDI loop through output. The DT-X71F includes an additional HD/SD-SDI loop through output and one HDMI converted to SDI output. All three models include stereo audio input.

“The new ProHD monitors are an affordable option for video professionals in the field and the studio,” said Dave Walton, assistant vice president of marketing and communications. “They are lightweight, deliver great images, and are built to last.”

Along with the new HZ-HM150VZR ProHD remote lens control, the DT-X71 Series is part of JVC’s new ProHD Compact Studio system, which configures the GY-HM150 ProHD handheld camcorder for studio environments. When mounted to the GY-HM150, the DT-X71 serves as a full-size studio camera monitor.