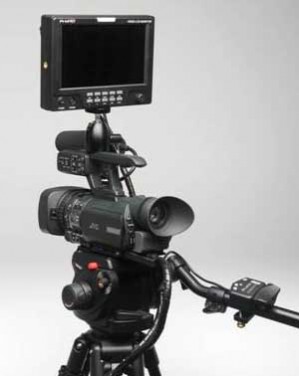 Specifically designed for the GY-HM150 by VariZoom, the new HZ-HM150VZR plugs into the 3.5mm remote connector on the right side of the camcorder. It offers professional-style zoom control via a wide sweep variable rocker. It also provides focus and iris adjustment, as well as start/stop operation. Beyond typical studio setups, the HZ-HM150VZR is ideal for operating the GY-HM150 when it is mounted to a jib, crane, or boom.

The new DT-X71 Series of portable seven-inch AC/DC ProHD monitors includes three models with scaled I/O options and adjustable 16:9/4:3 display for specific system operation needs. The LCD monitors produce 1024×600 resolution with a 160-degree viewing angle and 900:1 contrast ratio, plus they include front and rear dual tally lights and safe mark display. When mounted to the GY-HM150, the DT-X71 serves as a full-size studio camera monitor.

“The GY-HM150 is a proven workhorse in the field, and now it can provide ProHD image quality in the studio as well,” said Dave Walton, assistant vice president of marketing and communications. “Our new ProHD Compact Studio system is ideal for schools, small studios, government access channels, and other applications where space and budgets are tight.”