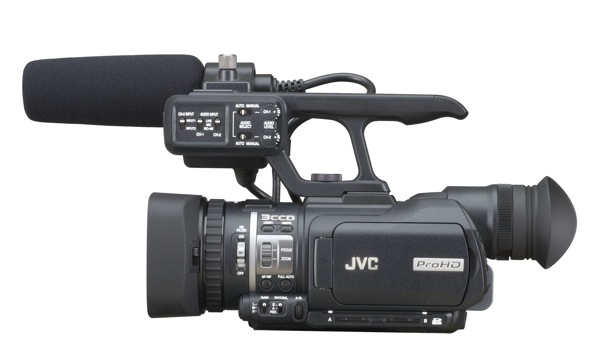 At the FCP SuperMeet at Macworld, JVC launched a new handheld camcorder, the GY-HM100. This camera is a very compact design, measuring roughly 6″ x 7″ x 14″ and weighing under 3.5 lbs. However, don’t let it’s size fool you. JVC has packed the camera with useful features that users have been clamoring for. Normally, I’m not taken aback by JVC camcorder announcements. Yes, they launched the first affordable HDV camcorder years ago, but since then their offerings and upgrades have been small, logical steps without many of the exciting technology leaps. This is not to say their cameras aren’t excellent tools. It’s just that they aren’t very exciting, and I don’t feel that they have put a lot of pressure on their competitors to drive future innovation. That being said, this HM100 announcement has me taken aback, and I think it will apply pressure to JVC’s competition. Here’s why…

For starters, the GY-HM100 offers a host of MPEG2 Long GOP recording options. 1920×1080 (1080p24/25/30, 1080i), 1280x720P (p60/50/30/25/24), and at bitrates between 19Mbps and 35Mbps. So basically, JVC’s HDV variant, standard 25Mbps HDV, and XDCAM’s 35Mbps option. You choose. Moving along, these recording options originate from three 1/4-inch native progressive CCDs (using the typical green-shift spatial-offset) that capture full-raster 1920×1080 progressive images. The audio recording format? Uncompressed. Audio connections? XLR. Recording media? Standard SDHC cards. And for the pièce de r©sistance, the GY-HM100 is the first camcorder to include the option to record in a native Quicktime format. What that means is, you can pull the SDHC cards, and there are “pre-wrapped” XDCAM EX .mov files on there that can be instantly dropped on the NLE timeline and edited. No Log and Transfer, no re-wrapping nonsense, no messing around. The files are ready to edit right out of the camera. And if that’s not what you want, you can choose to record in the standard MPEG-2 Long GOP streams, like any standard camera would. 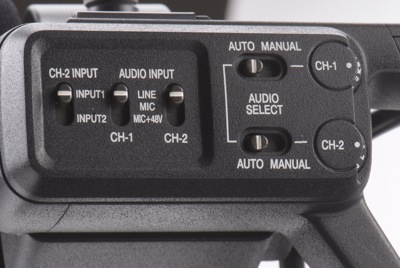 Do you see a pattern emerging here? JVC has realized that users want options. What they’ve put together in a camera is not any stunning technical achievement by itself, it is simply a collection of tools and features that users want. Which is a stunning achievement. Tools like 24p, progressive, multiple bitrate and format options, standard (cheap!) recording media, XLR audio. Options. No, it’s not perfect. For instance, the 3 1/4″ CCD’s are a bit smaller than I’d prefer. But this collection of features in a camcorder that is expected to sell for $4000 will surely put pressure on the industry as a whole to deliver users more options. As a result, the HM100 may well become the next affordable small-format HD camcorder to beat when it is delivered in April of this year.

But wait, there’s more! The JVC press release refers to another model, the GY-HM700, to be released in March of this year. Preliminary specs include 1/3″ CCD imagers, a larger LCD, the option to record to SxS card media, and Firewire, HDMI, and HD-SDI out included. Oh, and interchangeable lenses. This is very exciting news indeed.

Here is the link to JVC’s HM100 camcorder information page, and I’ve included specifications below. 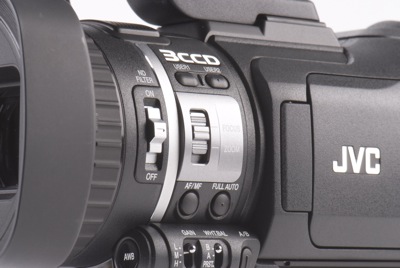