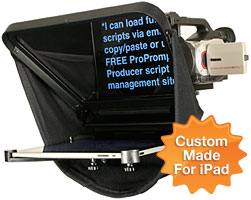 Bodelin created mobile teleprompting in 2002 and were the first to create a professional teleprompting App for the iPhone/iPod touch along with hardware released at NAB 2009.

The new ProPrompter HDi is the ultimate mobile teleprompter. No cables or additional computers, 10 hour iPad battery, large bright 9″ diagonal screen, a light yet durable design that holds the iPad safe and secure, studio quality beam splitter glass, anti-reflection mask and packs in a custom waterproof military grade case. The customer provides their iPad and purchases the ProPrompter App ($9.99) from the App Store. Retail $995 but pre-order special and NAB show special pricing is $850.

Shipping begins April 12th (opening day for exhibits at NAB in Las Vegas). The ProPrompter HDi and will be demonstrated and can be purchased at NAB in the ProPrompter booth C5237.

Many Bodelin dealers and international distributors will be honoring the special pricing and Bodelin is now building plenty of stock based on 800+ requests for pre-orders. Previous ProPrompter HD customers will easily be able to upgrade to the new iPad model.

The Bodelin ProPrompter team will post more photos, software and hardware announcements on April 5th just prior to NAB. http://www.bodelin.com/proprompter/ipad_remote