The documentary Into the Now VR takes the viewer underwater, for a journey after sharks that is also part of a research project on the benefits of VR for people with PTSD, anxiety and other stress disorders. 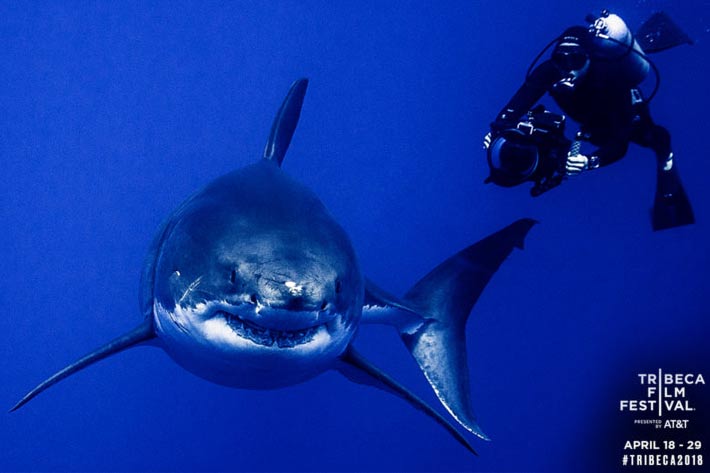 Announced as one of the multiple VR and AR presentations at the Tribeca Film Festival, Michael Muller’s documentary is the photographer’s first film shot in VR.

Established as a top celebrity photographer who later transitioned into directing TV commercials, Michael Muller has a lifelong fear of sharks which eventually led him to discover the tranquility and peace of mind that is possible underwater, engaged with these curious and intimidating creatures. That’s how his first book, Sharks, published by Taschen in 2016, come to be.

The photographer’s passion for marine life led him to explore the new tools available for creating narratives and the result is Into the Now VR, Michael’s first Virtual Reality film, which offers a unique look at our Oceans and the creatures that reside in it; from the variety of challenges facing our oceans, to capturing the most spectacular events in marine life, or as Michael refers to it, “the holy grails of diving.”

The story is told through the director’s personal journey of overcoming his deep fear of sharks by learning to dive without protection and cage-free with great white sharks.

The film series touches on the immense issues of climate change, pollution and overfishing while also serving as an extraordinary educational tool for viewers to experience the oceans firsthand through VR. This new medium immerses people in parts of the globe they may not have experienced and exposes them to creatures and adventures that they may never have the opportunity to see.

Michael Muller believes that, “People only protect what they love. To finally have a way to bring people along with me to witness nature in all its glory gives me a little hope that a seed will be planted in just one girl or boy. And that when they view this series, they’re inspired to go on to find the desperately needed solutions our planet faces.”

Through a special partnership with Stanford University’s Neurology department, the project is also part of an ongoing research project on the benefits of VR for people with PTSD, anxiety and other stress disorders. VR has been shown to alleviate many of the symptoms of PTSD and anxiety, making VR an invaluable therapeutic implement.

Michael Muller the director, hopes he can help open up our planet to new generations like Jacques Cousteau did for past generations. Into the Now VR is not the only film at Tribeca Film Festival using VR to tell the stories of our planet. This is Climate Change, from Danfung Dennis and Eric Strauss also has its world premiere at the festival. This expansive virtual reality docu-series from Participant Media and Condition One, journey to the far corners of the earth to discover the people and places being hit hardest by climate change. This Is Climate Change offers an immersive look into our new reality of catastrophic weather events that are displacing communities and transforming landscapes with alarming speed.

My Africa, also having its world premiere at the festival, is a mixed-reality, companion experience that puts participants in the shoes of a Reteti Elephant Sanctuary keeper caring for the newest arrival, a baby elephant named Dudu, in Northern Kenya. From Conservation International, Passion Planet and Vision3, narrated by Lupita Nyong’o, with Naltwasha Leripe, the documentary allows the public to experience standing Stand in the midst of a thundering wildebeest migration, witness a lioness snatch her prey—and meet a community dedicated to saving Africa’s wildlife.