It’s all about pixel counts… or is it? 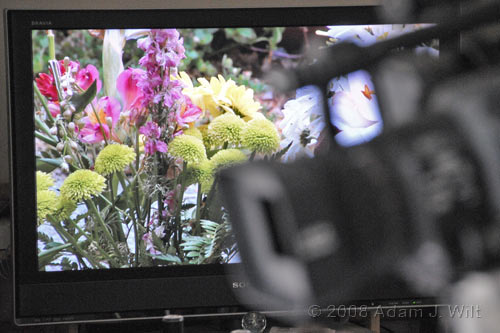 SD, 408p, 720p, 1080i, 1080p… 2k, 4k, UDTV… it seems like the big push is to get ever-higher resolution. It’s true that given two pictures, identical in every other way, that the higher-res image will look better—if you’re close enough to see the difference. But it turns out that resolution isn’t as important as you might think.

I recently had the opportunity to test “the resolution question” myself. My wife underwent surgery, resulting in two things: long periods of seated immobility, and multiple deliveries of flowers. We set up a workstation for her in the living room, about seven feet from the 40″ LCD HDTV, but the workstation didn’t have room for the vases of flowers, and she couldn’t turn her head to see the flowers elsewhere.

I put the flowers outside on the patio and set up a camera. I could provide close-ups of the flowers (as in the image above), or go wide to shoot birds in the birdbath and in the garden. These pix were fed to the 40″ LCD, so my wife could enjoy the view while ensconced in a comfy chair.

From seven feet back, all the cameras were essentially identical in apparent sharpness.

If I moved my chair much closer (or got up and ogled the screen from a few inches away), I could see the difference, but even there, if I looked at the content, not just the fine detail, all the cameras were just fine. I was able to notice the differences when I switched between cameras, but when I walked into the room or turned on the first camera of the day, all I saw was a nice, HD picture of flowers (or birds). My wife (a graphic artist and video editor, among other things) noticed color and highlight-handling differences, but never commented on sharpness. Without an A/B comparison, our eyes were quite happy to accept what they saw as “true HD”.

What counted more than resolution was smoothness: all the cameras put out a fairly creditable 1080i signal, so even if a camera didn’t have a lot of native detail, its signal was smoothly continuous, without telltale 480i interlacing artifacts. The absence of jaggies, stairstepping, and the like “sold” the image even when high-frequency detail was lacking.

How often does telling the story require ultimate sharpness?

Yes, there are times when “too much is never enough”: when you’re projecting on a cinema screen; holding a long shot and letting the action play out in depth; intercutting with other material shot at a higher resolution (thus making the difference noticeable). 2001: A Space Odyssey requires high resolution. Its 2.2:1 aspect ratio, letterboxed in standard def, is barely watchable, but with HD-DVD or Blu-Ray playback (or 70mm theater projection) the detail-centric glory of Kubrick’s intricate vision becomes clear. “2001” is notable for its dependence on (a) a big screen, and (b) the extended long shot (consider also the iconic opening scene in “Star Wars – Episode IV”).

But sometimes, “too much is too much.” Few stories are played in long shots the way 2001 was; in human-centered dramas, the emphasis is on the close-up. Filmmakers have been putting nets on (or behind) their pin-sharp lenses for the better part of a century, or using any of a staggering variety of softening filters, to tone down and excess of nagging detail. The Saddest Music in the World was shot on Super16mm, 16mm (spring-wound Bolexes), and a raft of Bauer Super8mm cameras, most of them with Vaseline smeared on their lenses.

OK, “Saddest Music” is an extreme case, but even so: if it were all about resolution, then neither VHS nor YouTube would ever have succeeded.

The whole point of this rant (what, there’s a point?) is simply: don’t obsess about limiting resolution, it’s only one, small part of what makes pictures look good. Colorimetry, highlight handling, shadow detail, and motion rendering may not be as easy to measure, but they’re all more important to image quality.