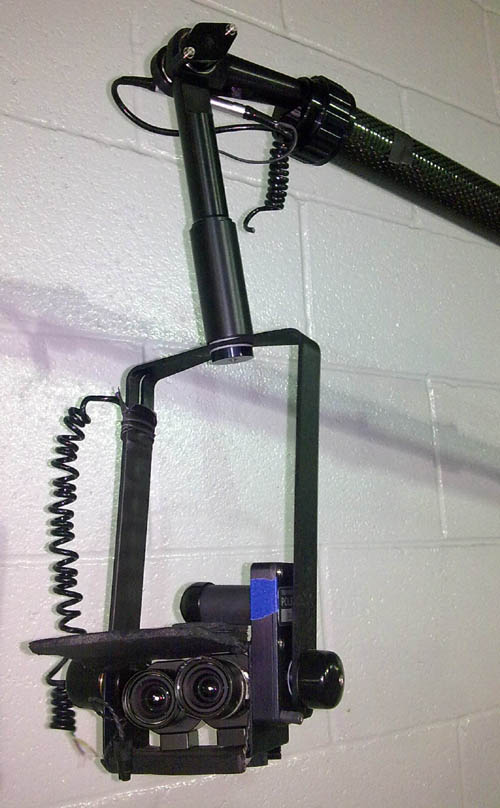 John Gillan, one of the world’s most experienced Polecam operators, reports the safe but dramatic outcome of a high-impact collision with stunt motorcyclist Todd Potter during shooting for ‘X Games 3D: The Movie’ for ESPN.

“Todd is internationally famous for his death-defying mid-air loops,” John Gillan comments. “We were positioned with a Polecam 3D head and support rig at the far end of a very steep take-off ramp. The landing strip was what you expect at the base of a ski slope only this guy was motor-powered and there was no snow to soften the landing. It all looked great as Potter performed a routine twisted swan dive before landing badly and losing control, heading straight towards the camera head. I had half a second to react before he collided. Pure 3D. Bike and rider came through the crash barrier an instant later, destroying the Polecam head. Thanks to the Polecam’s high manoeuvrability, neither Todd nor anyone else was hurt. I hate to think what would have happened if we had been using one of the old-style bulky camera cranes; that could have been a very serious accident both for Todd and the production crew.” 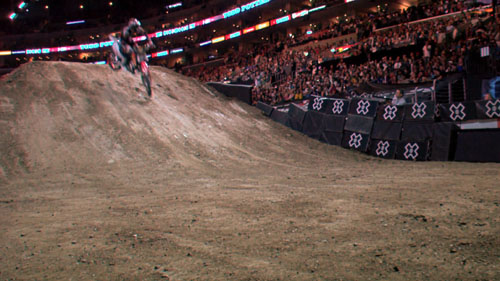 “This incident is conclusive proof of the claim we have been making for years,” adds Polecam founder and Managing Director Steffan Hewitt. “The Polecam rig’s portability and low inertial mass not only deliver advantages in terms of production versatility, they can also save lives. The impact hit the 3D Head full-on, displacing the cameras and breaking both camera cables. These cables and their connectors are so strong that they can support the full weight of an adult male. Many cameramen put their personal safety at risk to obtain highly dramatic images, often in competition with other crews covering the same event. 3D production is even more demanding in this respect than 2D as the most dramatic images are those where the subject is approaching directly towards the viewer. The Polecam system gives unique freedom to move the camera vertically or laterally at very short notice and, as we see here, makes a relatively soft target if an actual collision occurs.” 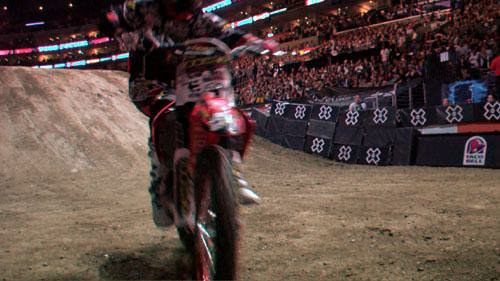 John Gillan of JGBroadcast has owned and operated two Polecam rigs for over 10 years. He commutes regularly between Britain, serving clients such as the BBC, GMTV and Giant Film & TV, and his base on the US west coast. The X-Games shoot was made entirely in 2k. JGBroadcast’s inventory for the project consisted of two Iconix HD-RH1F cameras mounted on a Polecam jib with the 3D Head pan and tilt unit plus two mounting plates from Creat3. Both Iconix cameras were fitted with C-mount HD lenses.

“The Creat3 plates allowed the cameras to be adjusted for pitch, tilt and convergence,” John adds. “Once these were set, I had to be very careful not to become a collision option…until it happened. The footage was recorded on two synchronised hard disk recorders. An important detail we found about shooting in 3D is that the cameras should not be moved as close to the subject as is normal for 2D. 3D close-up can become a little weird for the viewer because of hyper-convergence. I found the 3D optimal distance for me was about 3 to 4 metres. Also it was very important not to let any part of the subject leave the top of frame as that looks strange in 3D. Direct contact with Todd Potter’s bike was not part of the script!”

The X Games is an annual sports event, hosted and shown by ESPN Network controlled and arranged by ESPN which focuses on extreme action sports. Participants compete to win bronze, silver and gold medals. The event often features new tricks such as Travis Pastrana’s double backflip in Freestyle Motocross.

Polecam was established in 1998 by extreme sports cameraman/director Steffan Hewitt. While directing a series of windsurfing kit commercials in Hawaii, he needed to obtain close wide-angle front sequences of a windsurfer in action, shot from a tracking boat or jet ski. Steffan improvised a rig comprising a miniature camera on a carbon-fibre windsurfing mast. Returning to Britain, he developed a lightweight go-anywhere rig with a remote joystick controlling a high-precision pan and tilt head. Polecam is now supplied in HD and SD versions with a range of additional options including underwater and 3D pan/tilt heads. Polecam Ltd is active globally from its base near Bedford, England.

Accompanying 300 DPI JPEG images show stunt cyclist Todd Potter shortly before swerving directly towards the Polecam and (from the actual video footage) a split second before the actual impact, plus a close-up of the damaged 3D Head.

A video of the complete sequence, including the actual collision, can be seen at http://www.youtube.com/watch?v=-4XD9WFR-oY

ART OF THE CUT with Michelle Tesoro, ACE on editing “The Queen’s Gambit”

The New Sony FX3, A First Look At The Cinema Camera

Tested to extremes, the world’s fastest flash is evolving thanks to Profoto’s unique AirX technology, to give photographers a...

While Transcriptive from Digital Anarchy has been on the market since last fall, the development team is continuously adding...