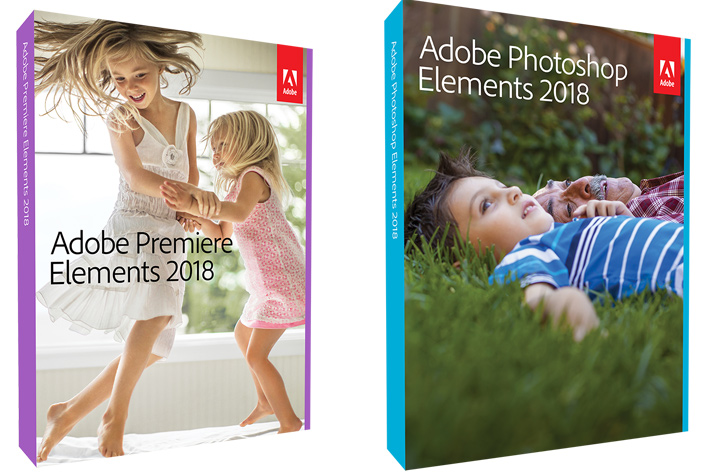 Released in time for Christmas, Adobe Photoshop Elements 2018 & Premiere Elements 2018 arrive with a promise: being creative with your photos and videos has never been easier.

Moving to a new release of its popular programs, Adobe decided to change the way they’re named, so there is no version 16 of Photoshop or Premiere Elements. According to Adobe, “moving forward both apps will take on the upcoming year of their release in-lieu of a version number; hence, the transition from version 15 to Photoshop Elements 2018 and Premiere Elements 2018”.

The change makes sense and puts an end to a problem felt by Adobe users – and probably Adobe -, in recent years: it seemed they were always using a program from “last year”. In fact, Adobe launched version 10 in 2011, and kept issuing new versions each new year, until in 2016 they launched version 15. We’re now at the end of 2017 and launching version 16 seemed a little out of tune, so the solution was found: the programs take the name of the year immediately after launch, that’s 2018. Now, if Adobe does not update the programs in 2019, the next versions will be Photoshop and Premiere Elements 2020! 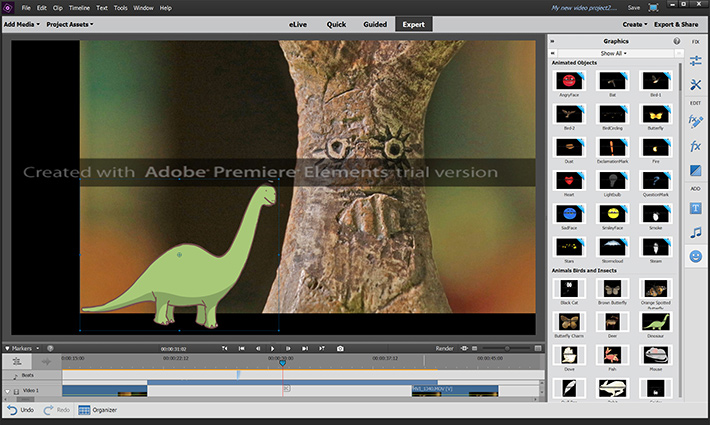 The Elements family has always been about giving users tools to easily organize photos and videos, editing, creating and sharing, through a user-friendly interface and modes for every level of user. That continues to be the core of both programs these days, with the recent release focusing on enhancing the experience even further for memory keepers, with hassle free organization, automated editing and some fun new Guided Edits that walk you through how to edit and create.

While you can buy Photoshop or Premiere Elements alone, I suspect many users will buy the bundle, especially as video became a pervasive technology in modern cameras, and everyone wants to create them. The price of $149.99 for the bundle may seem much but is probably the best deal if you look at the individual price for each app: $99.99. So, if you’re after a solution for editing photographs and video, and Adobe is the name you’ve as a reference, the bundle is the way to go.

Whichever way you go, the Organizer is the first element you’ll discover when opening the software. While this is no Lightroom catalog in terms of power – and some will say fortunately – the Organizer helps to keep things tidy, and for this version Adobe tried to get things working even better. The introduction of auto-curation, which automatically curates your photos based on quality, faces, subjects and more may well serve the public targeted with this version of the programs. If all works according to the promise, you no longer need to painfully look through a large batch of your photos to select the best ones. 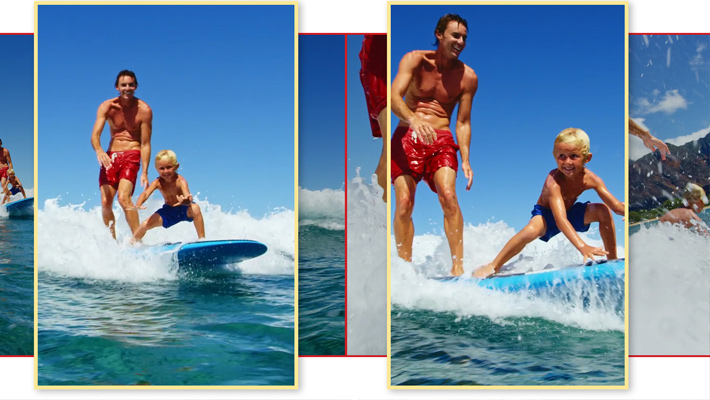 Slideshows are growing in importance as a way to show photographs, and the slideshow module in offers a one click operation to create dynamic slideshows from curated photos and video clips, to which you can add your own personal touch by choosing a different theme and music, or adding captions.

Guided Edits are integral part of both programs, helping users to go through seemingly complex tasks in a easy way, thanks to the easy to follow step-by-step instructions. These edits are mostly welcome among amateurs, although the somehow canned solution they offer sometimes restricts users. The idea, though, is to help users to understand the mechanics, so they can, afterwards, move to the Expert mode and do everything on their own. Whenever you don’t remember a specific step, you can go back to the Guided Edits and browse each of them. 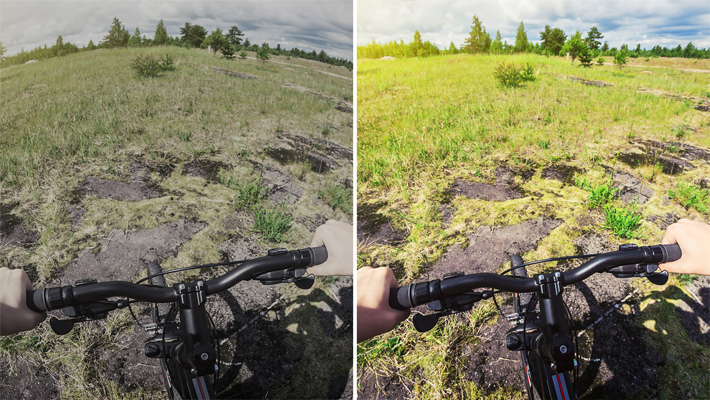 Photoshop Elements and Premiere Elements now offer 67 Guided Edits, including eight brand new ones in this release.  Some pertain specifically to one program, others are shared between both programs.

Adobe Photoshop Elements 2018 introduces two features, one of which may well solve some problems but opens strange possibilities: the option to “open  closed eyes like magic”. It’s obvious that the program does not reconstruct one eye that is closed, but simply gives you the option to copy the eyes from one photo and blend them in another where people may have blinked. No matter how strange that may sound, it can be a good solution to create a perfect shot if you’re faced with a “blinker” as the subject of your photography. Using eyes from different sources is also viable, introducing, then, what some people suggest is a “creepy feeling”. Imagine you start using eyes from different people… 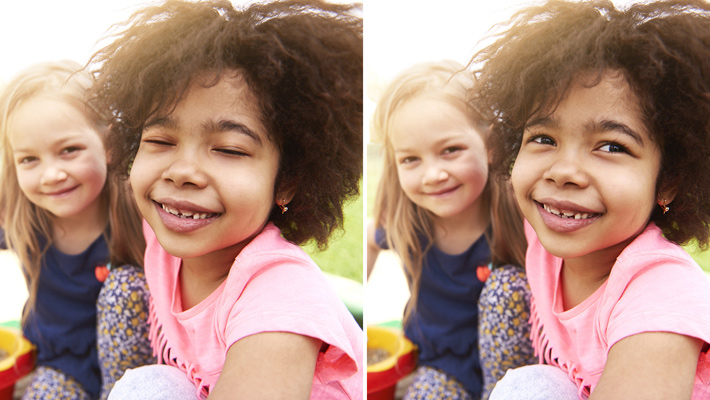 Auto-selection, a mode Adobe says offers a simple way to make selections is a new feature for this version of the program. With the new Auto Selection, making precise photo selections has never been easier – simply click, drag and it’s done, says Adobe.

Automation is, in fact, at the core of Photoshop Elements. Adobe confirms this, stating that you can “enjoy more time to be creative with automated photo editing”. Despite the fact that the expert mode allows you to take control of the program, Photoshop Elements is essentially conceived for home use and that explains why it offers the tools to create everything from dynamic slideshows to photo collages you can share with friend and family, or through the social networks, for which the interface offers direct links. 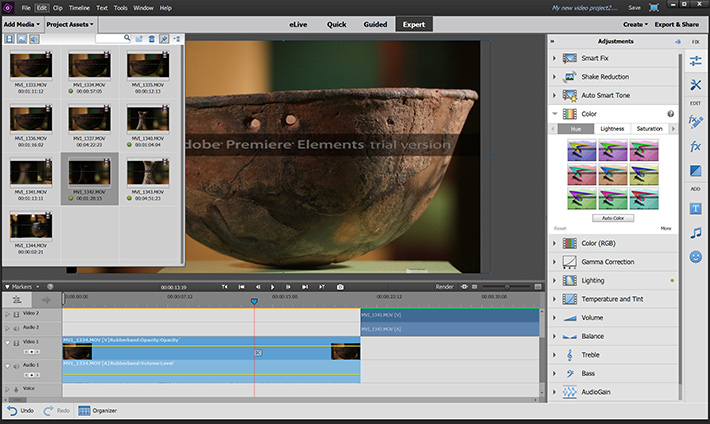 The other half of the bundle is Premiere Elements, the video editor from Adobe, which is, again, a simplified version of the professional Premiere with features appropriate for home users included. Not being a user of Premiere, it is difficult to compare versions or even write a review of Premiere Elements. Also, writing a review of a NLE based on a few hours playing with it makes no sense for me. I believe, from what I tried, that Premiere will be adequate for home users, especially if they are after automatic features as those announced as available in the program. Adobe says that “Smart Trim automatically finds and brings together the best scenes based on the style of your video” and that the software is also able to “auto-extract candid photos from your footage”.

It is important to understand that all these automatic features work when used within the limitations placed by the technology itself, so they won’t do miracles… and are not supposed to. A simple test trying to extract “candid moments” from a sequence of an archaeological artifact present in a video used for testing Premiere Elements 2018, reveals the limitations of the system. But feed the automatic feature with faces of people and footage the program understands, and results will differ. The same happens with “smart trim” used with the same video, the result begin the program can not trim anything from the sequence used. It’s not meant to… 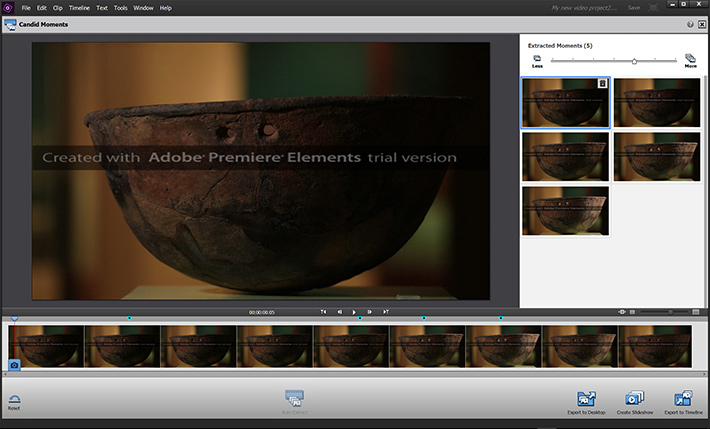 For those looking for more “conventional” ways to edit video, the options are also there, along with solutions that may – or may not – interest some users. The truth is that from a hassle-free organization of files, via the Organizer, to the step-by-step help with creative techniques and effects, which is expanded by the online options, along with the tools to add style and polish with freeze frame motion titles, bounce-back effects, and dozens more titles, effects, transitions, and themes or the ability to add music that can be remixed to match the length of your movie, Premiere Elements creates the conditions for what Adobe says is a “no-fear video editing” experience.

If you’re looking for a Non-Linear Editor and a photo editor for home use, these might be tools to investigate, with the bonus of them being Adobe branded without the need for a subscription. In fact, I would go as far as saying that you can use them for professional work, especially if you mix them with some external tools that, especially in the case of Photoshop Elements, extend its potential. Remember, it is not so much the tools you use, but the knowledge you’ve of the features they offer, and how to maximize their potential.

This said, I did feel a bit of a let down when I first opened a  RAW file in Photoshop Elements 2018 and a pop-up window suggested me that I should use Lightroom to get the most of my images. I was so surprised I did not capture a screen, and the pop-up did not show again. I am not sure if this goes into the final edition, but it surely feels strange: it’s like having just bought a brand new car, and as soon as you turn on the radio in your new car, you’re told you should have bought something else…