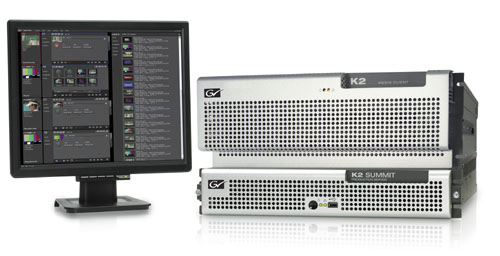 “Broadcasters are always looking for new and advanced technology to help them store and transfer their content in the most efficient way, and that’s exactly what the AVC-Intra codec is designed to do,” said Tadao Shimozuru, Director of Professional AV Systems B.U., Panasonic Corporation. “No format can be successful without the support of key vendors like Grass Valley, which has been a great partner in the evolution of the ACV-Intra format. Grass Valley has helped show its customers how frame-based compression positively affects HD editing, storage, and playout.”

“Since the introduction of AVC-Intra, we have recognized the value of this next generation codec for our customers and have worked diligently to provide seamless compatibility across many Grass Valley product lines,” said Jeff Rosica, Senior Vice President of Grass Valley. “AVC-Intra is now a market-accepted format for production and we’re committed to supporting it across many of our product lines.”

Among those customers that have already adopted the next-generation Grass Valley K2 Dyno Replay System and an AVC-Intra workflow for all types of productions are: WPVI (Philadelphia, PA-facility and mobile), Dorna Sports SI (Spain), EuroSport (France), NEP Supershooters, ESPN, Rainbow Network, and WPIR (Puerto Rico), as well as the production departments of an increasing number of US-based professional NFL football teams such as the Carolina Panthers and Green Bay Packers.

In addition, Panasonic uses the Grass Valley K2 Solo media server at trade shows and other events to demonstrate AVC-Intra based playback of 3D content using Grass Valley ChannelFlex technology, which allows all K2 Summit and K2 Solo servers to be expanded from four or two bidirectional channels to process up to eight or four video streams, respectively. This allows customers to get more functionality out of their investment while providing an ideal bridge from HD to 3D production.

The combination of intraframe coding and 10-bit 4:2:2 color at a highly efficient bitrate has made AVC-Intra an extremely popular choice for both news and production editing. Grass Valley’s EDIUS and Aurora editors both support AVC-Intra as a native editing codec, and the format is fully supported by Apple and Avid editing products. News operations using Panasonic camcorders and Grass Valley servers and editors at WABC (New York), KWCH (Wichita, KS), WBNS (Columbus, OH), and WTHR (Indianapolis, IN), along with many others, enjoy a seamless AVC-Intra workflow from acquisition through playout with no transcoding required.