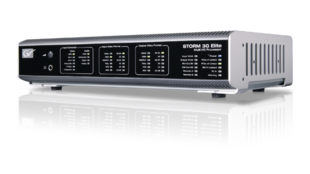 STORM 3G is an internal board equipped with 3G-SDI I/O, HDMI monitor out, RS-422 for VTR control and REF In. The incoming baseband signal can be captured in either 10-bit or 8-bit video. Choice of codecs includes uncompressed, Grass Valley HQX (10-bit) / HQ (8-bit), AVC-Intra, and XDCAM compatible MPEG-2. Audio is embedded in both SDI and HDMI, providing high-quality audio I/O. A timecode option is also available enabling linear timecode input as well as two reference outputs.

STORM 3G Elite consists of an external breakout box with a PCIe 4x interface card for desktop connection (4X mode provides enough bandwidth to handle up to 1080p50/60) as well as an Express 34 card (1X mode: up to 1080i50/60) for connection to a laptop. STORM 3G Elite provides the most comprehensive, most complete set of signal interfaces available today. Video interfaces include dual 3G SDI, which can be used as either two independent 3G SDI (1080p50/60) outputs or one pair identical SDI signals one of which features selectable real time down conversion.

Others interfaces include 1080p capable HDMI I/O, composite (SD only), and component (up to 1080i) analog video I/O. For audio, STORM 3G Elite has four pairs of AES/EBU interfaces (as eight BNC connectors, each accommodating two audio channels up to 48 kHz, 24-bit). Another four pairs of XLR balanced audio are also available, with a stereo pair each of balanced and unbalanced audio monitor out.

A switchable line/mic (switchable phantom power) is also available for a dedicated voice over input. The uniqueness of STORM 3G Elite continues with control/sync. STORM 3G Elite has two RS-422 interfaces, one for controlling a VTR as master, another for control of a slave. Linear timecode I/O, reference in/through/out interfaces (which accept both bi-sync and tri-sync level), and a locking power connector round out the rest of the interfaces.

“These new STORM Series I/O boards will be bundled with the new EDIUS 6 multi-format editing software to provide users with an affordable and highly efficient workflow, including 3D projects,” said Jeff Rosica, Senior Vice President of Grass Valley. “This new series of editing hardware products gives users the I/O functionality they need without the added cost associated with other solutions in the market.”