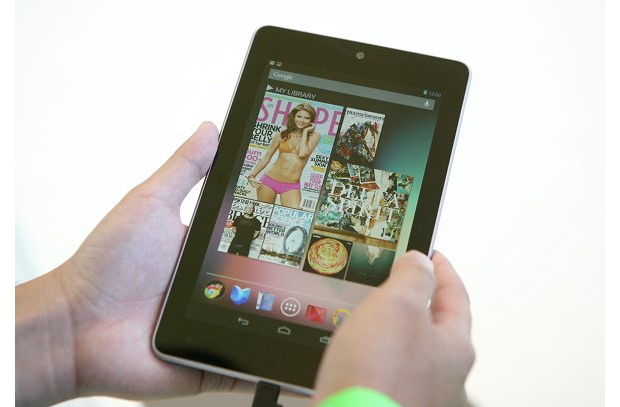 Yesterday, Google announced its first branded tablet, the Nexus 7, with a 7-inch diagonal, 1280×800 screen, and the latest 4.1 Android OS operating system. With a base price of US$199 for the 8GB model (or US$249 for the 16GB model), it is perfectly positioned to be a “Kindle Fire killer”… or at least for a few more weeks, since Amazon is expected to update its entire Kindle line during the month of July. This first look article will review the multiple “Nexus advantages” (known by die-hard Android fans) compared to other Android devices, and what we should know about it as content creators and consumers. Whether or not we actually end up producing any content with one, we need to understand the Nexus 7 as it shapes the market as a delivery platform.

Most Android phones are highly segregated and fragmented, since most of the time, both the manufacturers and the carriers manipulate and censor the original Google offering. Although sometimes the manufacturers and carriers add valuable content, skins or features, they also often censor features and add extra software provided by partners as bait in order to encourage users to sign up for extra paid services with their associated fees. One example is Samsung’s Galaxy S Vibrant (the T-Mobile USA variant of the original Galaxy S), with the first offering (2.1), T-Mobile censored the mobile hot spot feature, and encouraged users to sign up for an optional paid service for turn-by-turn directions with navigation, even though the free Google turn-by-turn services was also present on the phone. One undeniable advantage of this variant was the dedicated search button (which was/is missing from the European and South American Samsung Galaxy S). The Vibrant users eventually received a free upgrade via T-Mobile to Android OS 2.2 together with the mobile hot spot and some other bonuses, but 2.2 was the end of the line as far as updates, except for those who dare(d) to “root” and “hack” their phone to force later versions, with the associated hassles and risks. In my personal case, after a long time of using a Vibrant (followed by a very short time with a Galaxy S 4G), I made a decision only to use Nexus series Android phones from now on (those which are branded by Google and sometimes sold directly by Google) because of the following “Nexus advantages”:

The “Nexus advantages” in the Android tablet world

Google’s new Nexus 7 is the first Nexus Android tablet, and will ship immediately in July with Android 4.1, which is the latest version. It obviously contains an uncensored version of the Android OS. I don’t have personal experience with other Android tablets, but I know that some (i.e. Samsung) are actually offered as Android, while others disguise the Android base (i.e. Barnes & Noble’s NOOK Tablet and Amazon’s original Kindle Fire), both of which purposefully attempt to prevent users from purchasing content from their competitors’ online content stores. In some cases, users willing to “root” and “hack” have been able to circumvent these restrictions, although I believe they represent a small percentage of the total number of purchasers. On the other hand, in its promotions of the Nexus 7, Google encourages users to “Explore over 600,000 apps” contained in Google Play (Google’s new name for its online application and content store). Obviously, Google will prefer that you purchase content via its own store. However, there is absolutely no indication that they will prevent users from downloading Amazon’s Android-based Kindle App, so in this sense, and off the shelf Nexus 7 tablet is much more open than an off-the-shelf Kindle Fire or NOOK Tablet. As far as Amazon videos (and other videos) on the Nexus 7, I’m going to cover this in an upcoming article. Stand by for that.

Hardware differences between Nexus 7 and the original Kindle Fire

From one perspective, this comparison is unfair for consumers who are about to make a brand new purchase, since it is likely that the original Kindle Fire will be superseded by a superior model around the same time the Nexus 7 ships sometime in July in the USA, Canada, the UK, and Australia. However, my understanding is that Amazon never sold the Kindle Fire officially in Canada, the UK, or Australia, and this information is also somewhat valuable for current Kindle Fire owners who may consider upgrading. Finally, this is much more important for content producers who need to consider the Nexus 7’s role as one of many distribution platforms.

It is yet to be determined whether the Nexus 7’s Micro USB port will work for USB audio devices like USB headsets and the new hybrid USB mics I’ve been covering. To my knowledge, this has not worked with any previous Android device other than the G1, but the new hardware and new 4.1 operating system may hopefully change that.

Stand by for my upcoming article: Google’s Nexus 7 for audio/video and ebook distribution, for content producers & content consumers

I have just published a somewhat related ebook in two languages.
The format is Kindle, but even if you don’’’t have a Kindle device, you can read Kindle books on many other devices using a free Kindle app. That includes iPad, iPhone, Android phones, Android tablets, Mac computers, Windows computers, some Blackberry phones and Windows 7 phones.