Behold the vectorscope in Final Cut Pro X, and glory in its limited options: 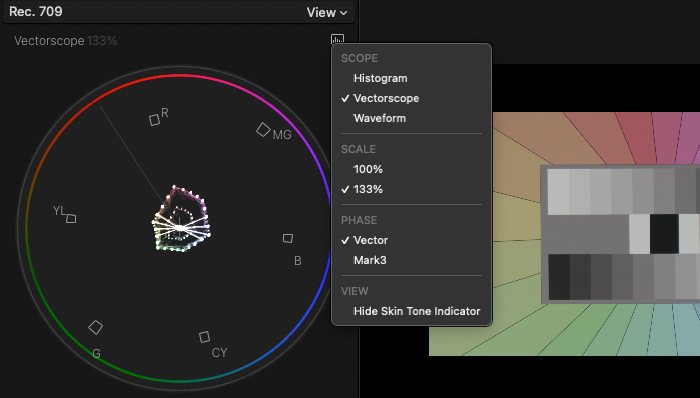 Can’t fix the scope? Fix the picture instead

Quick fix: use an Adjustment Layer, and set its saturation to x2. If you’re using the Color Board, set Global Saturation to 100%: 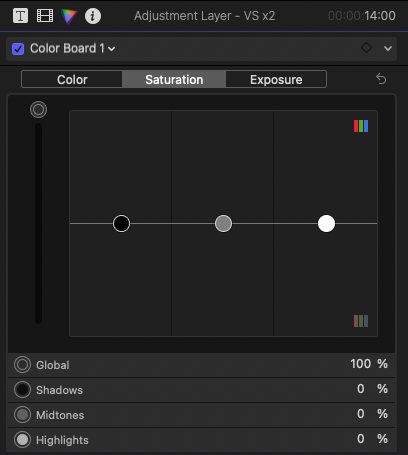 Yes, that may push saturated colors into clipping, but it’ll also push the half-saturation chart colors towards their ‘scope targets.

You can also set up a crop in your Adjustment Layer to mask out everything except your test chart, simplifying the ‘scope’s display so you can focus on calibrated corrections: 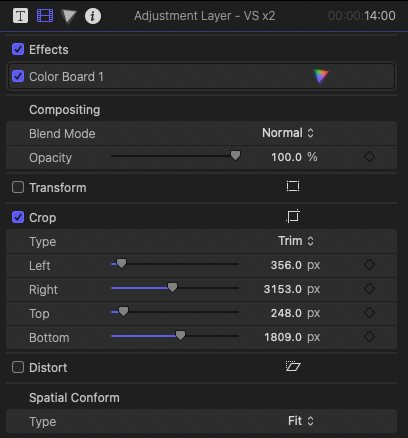 I found this essential when compiling the CML 2021 RAW tests so I could match and white-balance my clips, and compare the ‘scopes for ProRes RAW in FCPX to the ‘scopes for Blackmagic RAW in Resolve (Resolve, of course, has a proper x2-capable vectorscope).

Just don’t forget to turn the Adjustment Layer off when you’re done with the ‘scopes!

In this case, the chroma hexagon is still pretty far from the targets: the Panasonic S1H RAW file is decoded using Panasonic’s recommended VLog-RAWGamut-to-VLog-VGamut camera LUT plus the  VLog-to-V709 custom LUT, which yields a desaturated, low-contrast image. Check out the RAW tests for other decoding pathways and their results.

…who the frack has a color chart in any real-world shot? I said it was a GeekTip™, not a ProTip! Even so, many a discerning DP will shoot a DSC ChromaDuMonde or a OneShot as lighting and/or grading reference at the start of a setup. No, it won’t be in a circle take; it’ll probably be in a separate clip of its own in the same bin, possibly with the same filename-encoded scene or shot number. The idea is to perform basic technical corrections on the chart clip, then copy them to the clips used in the edit.

To be of any use, of course, the post process has to carry the chart clips along with the edit, so that they can be called up to set (or check) the basic technical grade of the shots that are used — but that’s a topic outside the scope of this article.

…you’re not seriously suggesting serious grading inside FCPX? FCPX ain’t Resolve, but if you’ve built the show in FCPX, it’s often easier / safer / more cost-effective to grade it in FCPX than to move the show elsewhere for grading, as Scott Simmons eloquently argues.

…what’s that weird chart? It’s the sole prototype of the DSC Labs ChromaMatch GEO. It arranges the 24 ChromaDuMonde colors radially around the grayscale reference at the same angles those colors have on a Rec.709 vectorscope. Sorry, it’s not shipping yet; I’ll make some noise about it when it becomes available.