A simple introduction to gamma-corrected compositing. 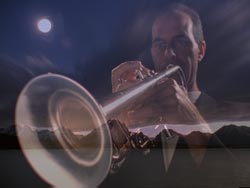 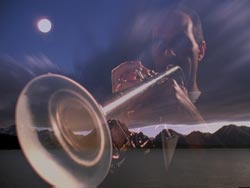 The image on the left is a normal computer crossfade; the image on the right uses linear blending – note how the bright areas are emphasized. Footage courtesy Artbeats.

Most of us have been navigating the waters of computer graphics with the assumption that the world is flat. And it’s remarkable how well we’ve done with this fundamentally flawed assumption. However, some of you may have heard whisperings that the world is actually round – often couched in terms of how important it is to understand the subject of gamma, and to composite within a “linear light” model.

An exhaustive treatment of the subject of gamma requires something more akin to a book than a column – along with several bottles of aspirin. Here, we’re going to give a very light introduction to the subject of gamma (no pun intended), and demonstrate how you can experiment with these concepts in existing programs such as After Effects, Motion, and combustion. Although visual effects artists – with their pursuit of reality – are often obsessed with accurate recreations, motion graphics artists – with their pursuit of surreality – may find that breaking the rules yields a more interesting result.

(Note: This article was originally written before After Effects natively supported gamma-corrected compositing. As of After Effects 7 and later, there are checkboxes in File > Project Settings which allow you to do this without the extra layers and expressions detailed below. However, the following is still highly useful for understanding the underlying concepts, implementing linear gamma in other programs, and creating your own custom gamma working spaces to create new looks. At the end of this article, we’ll discuss those checkboxes in After Effects in more detail.)

In most computer software, a 50% luminance value is intended to be perceived on a monitor as “50% gray:” an equal mix of black and white. This is logical and intuitive; many processing functions such as Brightness and Contrast as well as blending modes are based around this. Too bad it’s not the way light really works. 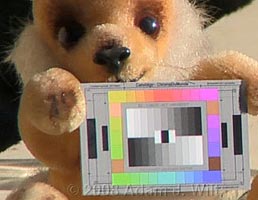 In reality, our eyes are very sensitive to low light levels. As some of you know, an “18% gray card” or a similar section of an exposure chart is called this because 18% of available light is being reflected back to the viewer. However, we mentally perceive it as “middle” (or 50%) gray. The signal capture and presentation chain, including cameras and monitors, have corrections built in to bend this reality to the computer’s representation that a 50/50 black/white mix is really middle gray. The number most often used is a gamma correction of 2.2 (although different computer systems and file formats can use different values; 2.5 is also a common reference value).

Thanks to these gyrations, we can successfully perform most of our graphics work in the computer’s gamma-corrected space. However, if you are trying to accurately recreate the way light works, some of the way colors mix in the computer are off a bit. Therefore, more users are finding ways to undo the computer-based gamma corrections so that they can composite images in “linear light.”

It is relatively easy to hotwire your software to allow you to composite in linear light space. If your software allows you to select a higher bit depth, use it; 16-bit linear mode will reduce banding, while floating point mode will allow preservation of extreme shadows and highlights. (The eLin plug-in suite distributed by Red Giant Software simulates the benefits of floating point in After Effects 6.5, while also performing gamma-corrected compositing.) As an experiment, follow these steps:

If you look closely at the two images at the top of this page, you should notice that in the “linear light” render, the lighter areas in the second clip appear more quickly as that clip fades up, and that the lighter areas in the first clip disappear later. This more accurately mimics our eyes’ sensitivity to lower light levels, and is sometimes known as an “optical fade.” Aside from being more accurate, this uneven crossfade can look more interesting as well. This phenomenon of emphasizing the brighter areas also shows itself in a number of other ways, such as when an object with motion blur crosses in front of another (the blur trails will appear brighter), or when you have feathered edges or glows around objects.

Here’s another one of our favorite tests to show the differences between gamma-corrected and linear light compositing:

In this case, you should note differences in the way the image blows out over time: The width of the bands in the transition area from somewhat normal color to blown-out color are broader when performed in linear space, looking subjectively more subtle or pleasing. Darker details such as the eyes and shadows in the creases of the face should persist longer in linear space, making the face recognizable longer during the blow-out (see the figures below). You will also find that you need to crank up the light much brighter – perhaps to 5000%, instead of 1000% – to completely blow out the image. 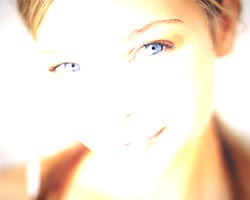 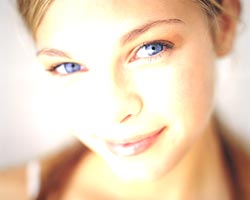 These tests provide you a with blueprint of how to perform linear light compositing: Correct the sources to linear by applying a gamma of 0.4545, perform your treatments, and correct the result back to a 2.2 gamma. However, you cannot blindly apply this to any project. For one, some blending modes (such as Overlay, Soft Light, Hard Light, and to a degree Screen) will no longer work “properly” as they are based around the idea that a 50% pixel luminance value means 50% perceived brightness. You will also find that you will need to adjust or increase parameters such as light level, cone feather, and glow amount to achieve the same general results as you saw in the computer’s default space.

This is all well and good if your goal is to mimic nature and reality…but that’s often not the goal of a motion graphics designer. For example, what if you want to favor the dark areas of an image instead of the light areas? Or what if you want a less (or more) severe effect? The simple answer is to experiment with gamma corrections other than 2.2. Here is one way to set up such a project with maximum flexibility in After Effects:

Then perform any treatments, effects, or compositing you like! For starters, try the simple crossfade you created in the first example. In this example, place the time marker in the middle of the transition, and then vary the RGB Gamma parameter for the Master Gamma layer. Note how the composite image changes, favoring light or dark areas depending if the gamma is above or below 1.0 (see below).

A normal computer crossfade (left), a “linear light” crossfade (center), and a creative fade using the opposite gamma as linear light (right).

Hopefully this will open up your mind to the potential in gamma-corrected compositing. It’s not something you need to employ on every job, but it’s an important tool to be familiar with, for both realistic and creative applications.

As mentioned earlier, After Effects 7 and later now implement linear gamma as option in File > Project Settings, which eliminates the need for all of these extra layers, effects and expressions. The one downside is that you can’t set the gamma correction yourself (the last trick shown above); it is currently hardwired to the perceptually-correct 2.2 value.

In After Effects CS3, there are two choices: 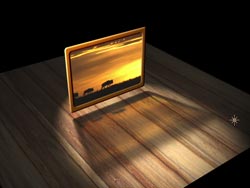 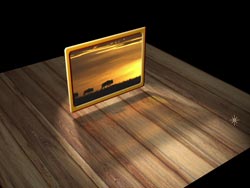 It can be deceptive to set up 3D lighting in a scene (left) and then enable Linearize Working Space: The result will appear blown out (right) as the lighting will appear to be boosted.

In After Effects 7, there is only one choice: Linear Blending. It has the same effect as the Blend Colors Using 1.0 Gamma description above. We were greatly disappointed that we couldn’t achieve the lighting effect demonstrated earlier using this option in 7, but we now can using Linear Working Space in CS3.

Change these setting before you get too far into a project, as they will change how your composites look (observe the images above); you don’t want to select one of these modes just before blindly starting an overnight render!

By the way, Color Management in After Effects CS3 is covered in more detail in Creating Motion Graphics 4th Edition, Chapter 25.