When Stills Just Aren’t Enough, a marketing phrase used for the Fujifilm X-T200, reveals how the company views this new model: as a compact video camera that also shoots stills. 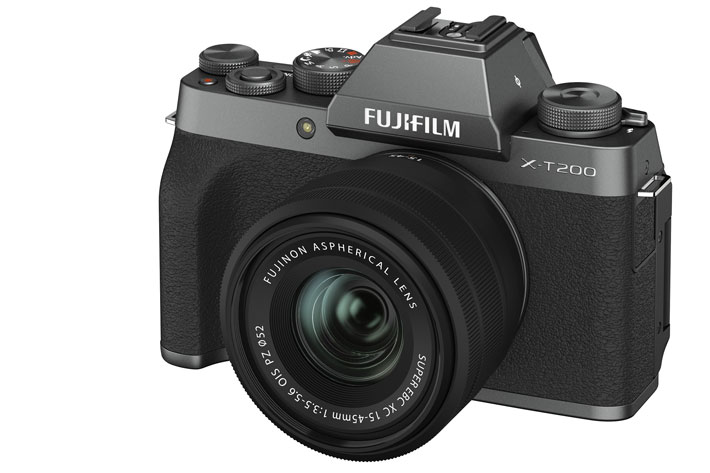 The Fujifilm X-T200 takes the promises of the X-T100 it replaces to a whole new level, while still being an entry-level camera, evident on the way Fujifilm compares its functionality with that offered by smartphones, mainly regarding a first for Fujifilm X family cameras: the presence of a Digital Gimbal Mode. More about that soon, but let’s look at other key specifications and, because this is ProVideo Coalition, video functions.

The X-T200  is a lightweight – weighing just 370g – and compact mirrorless camera body that features a newly designed EVF, quick face detection AF, and a new sensor and processor combination that can create 24.2MP stills at 8 FPS and record 4K UHD video at 30fps. It’s not a X-Trans sensor as Fujifilm uses in some of its models, but a Bayer sensor akin to the one used in the X-T100. Its new, though, a high-speed APS-C 24.2 Megapixel CMOS sensor which uses copper wiring for optimal performance.

The sensor works in tandem with a high-performance image processing engine, and as usual for Fujifilm, the use of the unique color reproduction technology, nurtured over 80 years, recreates “memory colors” or colors as one remembers in one’s memory, such as naturally beautiful skin tones, vivid lush greens of early summer and deep blues of the sky on a bright sunny day. 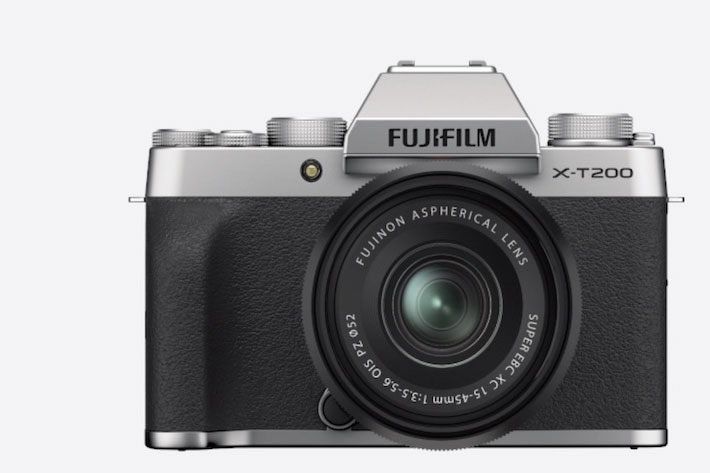 The X-T200 offers 11 variations of Fujifilm’s unique Film Simulation Modes including Velvia and PROVIA, making it possible to choose from different color tones and expressions according to the subject or scene as if users are opting to use different photographic film. “Clarity Filter” has been added to bring the total number of Advanced Filters to 20, adding advanced artistic flair to images to expand the scope of one’s photographic expressions.

The camera’s AF performance has been enhanced by placing on-sensor phase detection pixels across the sensor and adopting a further evolved algorithm. This enables outstanding AF tracking of a moving subject and AF on faces / eyes, as well as giving the ability to attain focus quickly and accurately even in low light conditions. The camera also offers a variety of automatic functions including the Advanced SR Auto, which automatically selects the optimum shooting settings according to given scenes such as portrait, landscape and night scape, so that the users can take high-quality pictures with ease.

Photographers will appreciate both the AF accuracy and speed and the camera’s ability to keep with that when shooting action. The camera boasts continuous shooting of 8fps, meaning it combines with the fast and accurate AF capability to capture a decisive photo moment. Yes, it’s not up to the level of some professional models, but this is an entry-level camera, if you really need or want to classify it, that costs $699.95, body only. 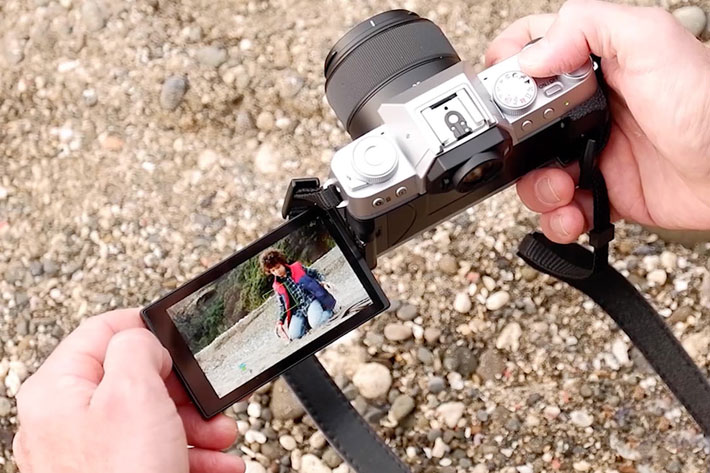 The X-T200 features a new 3.5-inch widescreen LDC monitor with the aspect ratio of 16:9, offering the touch response performance equivalent to or greater than smartphones in general to enable intuitive operations. Shooting settings can be easily adjusted with touchscreen operations while users visually check exposure and the degree of bokeh on the screen.

The monitor has a high level of clear visibility thanks to its maximum luminous intensity of approximately 1,000 candelas, double the brightness of the X-T100 monitor, displaying the subject clearly even on a bright sunny day outdoors. The monitor has a “vari-angle” structure that allows users to adjust the monitor to any angles, facilitating photo shooting from low and high angles. It can also be flipped for easy “self portraits” in conjunction with the Face / Eye AF. The camera also has a newly designed EVF, a 2,360K-dot OLED color viewfinder covering approximately 100%, with a built-in eye sensor. 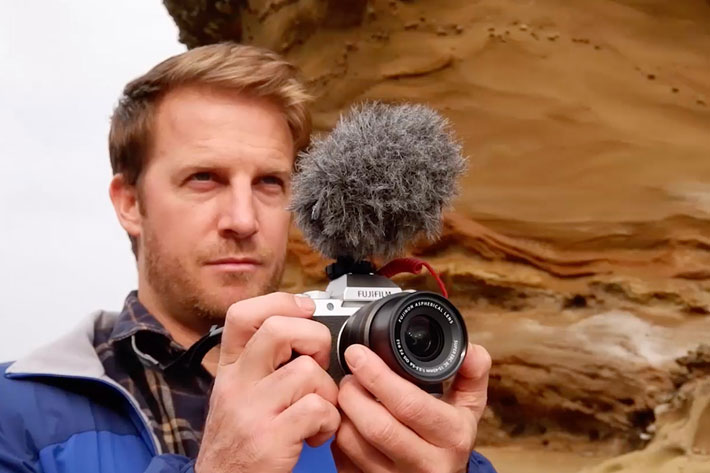 The video specifications of this new model make it an interesting option for any 4K shooter using Fujifilm, or anyone looking for a first camera at a budget price, with professional features. The X-T200 generates 4K (3840×2150) video by recording 6K video with no crop (6032×3392) and downsampling it, which results, says the company, “in incredible image quality with very low noise. Film Simulations can also be applied during video capture to add stylistic effects.”

The new HDR Video mode allows users to combine multiple videos with varied exposure settings to increase dynamic range and make movies with more detail in shadows and highlights. This is perfect for situations where there is strong backlight or for outdoor scenes where there are mixture of shadows and highlights. One note to keep in mind: in dark situations, the function might not be as effective. 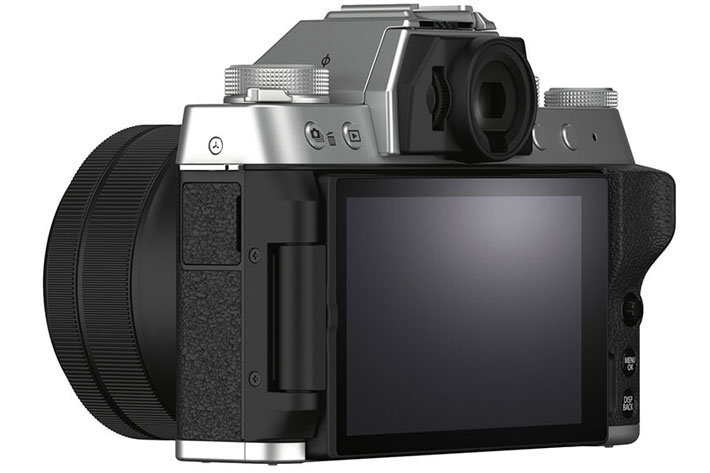 Still, the new HDR Video function makes recording footage in high contrast situations much easier and more practical. Using in-camera video editing functions, with the newly added “Cut & Edit” function, allows for clips to be trimmed and right-sized before they are shared. This means creators can share the perfect section of a super-slow motion clip or the best part of their 4K footage , adds Fujifilm, “right from the camera to their Smartphone without ever needing to open a computer!”

The camera shoots 4K UHD at up to 30fps, Full-HD and HD at 60fps, and Full-HD video can also be recorded at the rate of 120fps, providing smooth video even in slow-motion replay of a fast moving subject. The use of copper wiring in the sensor also helps to makes this model able to process data 3.5 times faster than the X-T100,  so rolling shutter is significantly reduced. 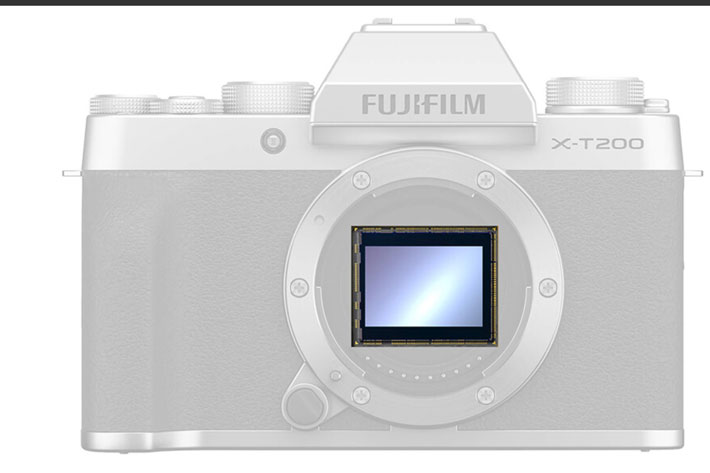 A camera with a gimbal inside

The X-T200 may be an entry-level camera, but it offers some features that more expensive model do not include: the camera uses a USB Type-C terminal and Φ3.5mm mini stereo jack so users can connect external microphones and headphones to monitor and enable high-quality audio recording for a wide range of applications from vlogging to making simple videos.

This is also the first digital camera from Fujifilm to feature the Digital Gimbal Mode. It uses gyroscopic sensors installed in the camera body to help it determine how to account for camera shake and apply its digital image stabilization algorithm, which allows for smoother video capture. The new function has two limitations that users must be aware of: the field of view is cropped, and lenses and angles of view that can be used are limited.

Still, if the system works as Fujifilm suggests, it’s a welcome solution for videographers who need to shoot action. Fujifilm notes that the function “enhances image quality even further beyond what normal Smartphones can provide comparatively”, a clear confirmation, along with other references made, that the company positions the camera as an upgrade for smartphone users aspiring to have a better solution for capturing photography and video. 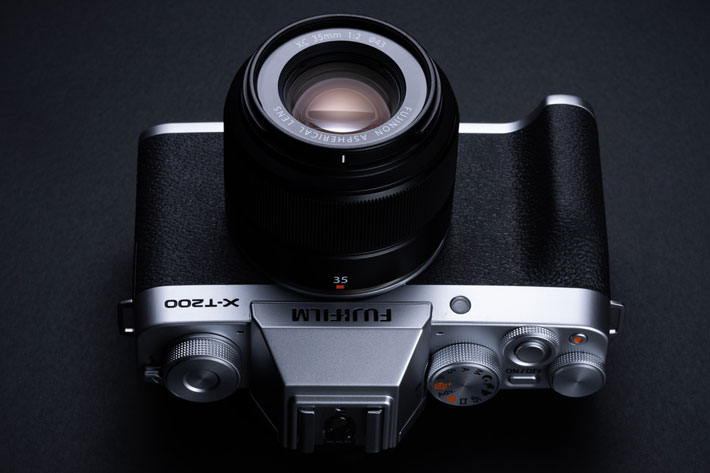 For those interested in expanding their X-T200 tool kit with a prime lens, the new FUJINON XC35mmF2 lens gives an equivalent to 52mm field of view on 35mm format. Weighing just 130g and measuring 46.5mm in length, this new prime lens has nine elements, including two aspherical lens elements in six groups, which work to produce sharp and crisp images with creamy bokeh. AF operation is quick and near silent thanks to the use of an internal focus system and a stepping motor, which is used to drive the focusing elements quickly and accurately.

These are the prices suggested by Fujifilm for the X-T200 camera, kit and new lens: 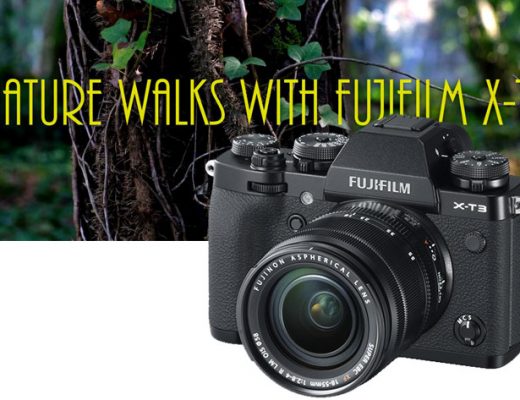 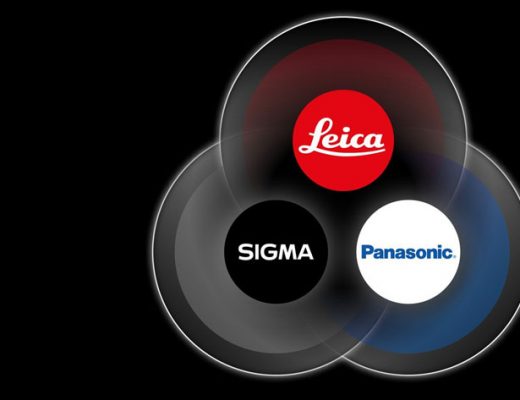 Leica, Panasonic and Sigma join efforts to offer cameras and lenses utilizing the L-mount created by Leica. It looks...