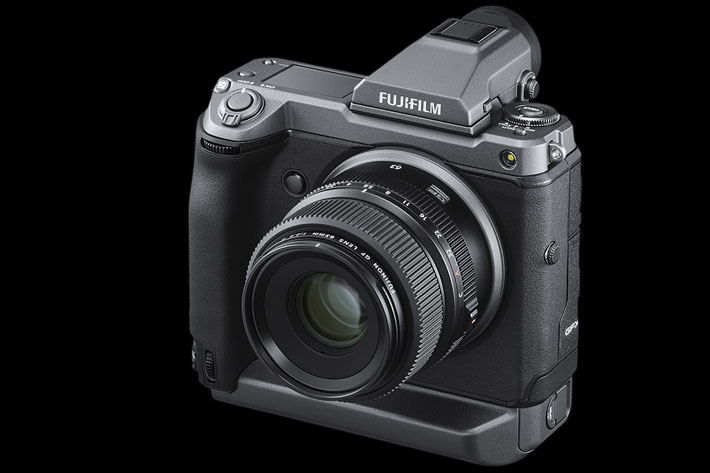 The rumors are finally confirmed. After all, it was difficult to hide a camera as big as this one, and FUJIFILM announced the FUJIFILM GFX100 mirrorless digital camera (“GFX100”) will arirve in late June 2019. The GFX100 is a flagship model of the GFX Series of mirrorless digital cameras, which have won strong praise from professional photographers and photo enthusiasts alike for the use of a large image sensor, boasting approximately 1.7 times the size of the 35mm full-frame sensor.

With this sensor FUJIFILM has a world’s first, but the resolution of the sensor also brings some other world first that the company was eager to mention. So, with a sensor larger than the 35mm full-frame format, this is the world’s first model that offers  a back-illuminated sensor with phase detection pixels,  in-body image stabilization (IBIS) mechanism and 4K/30P video recording capability. The innovative mirrorless digital camera fulfills photography’s intrinsic mission of “capturing and recording precious moments that are never to be repeated again.” 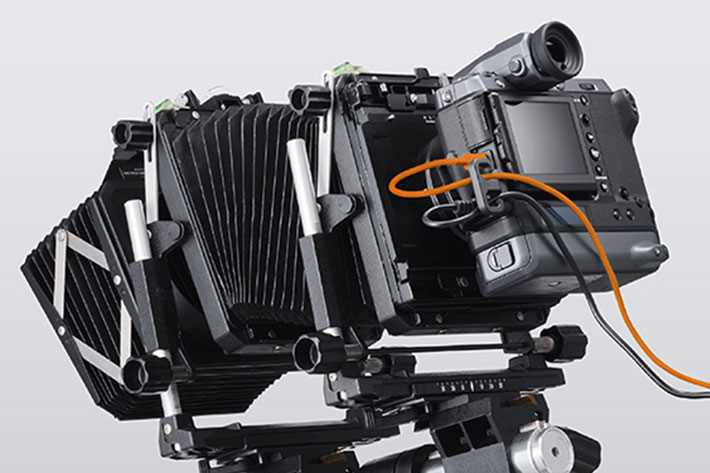 If you look at the GFX100 from a photographer’s perspective, the camera looks as an overkill solution for many users. As a stills camera, it is, no doubt, a great tool for photographers who want the maximum in terms of sensor size and resolution, but one has to wonder how many will buy it. One has to look at the information provided by FUJIFILM, though, to better understand what the GFX100 represents. The company, mention more than once that the video recording capability featured meet the needs of premium video production, an evident suggestion that this model is also designed to be used as a video machine. The specifications are there, some of them at least, and they are the main focus of this note here at ProVideo Coalition. 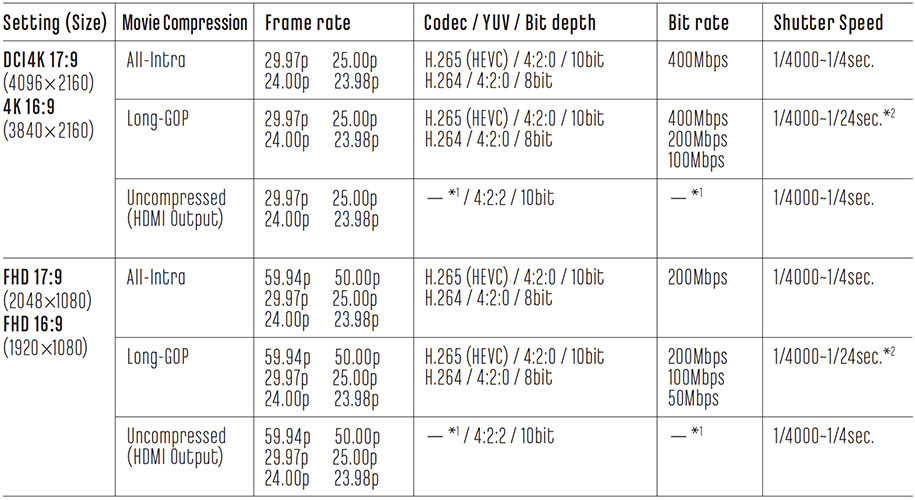 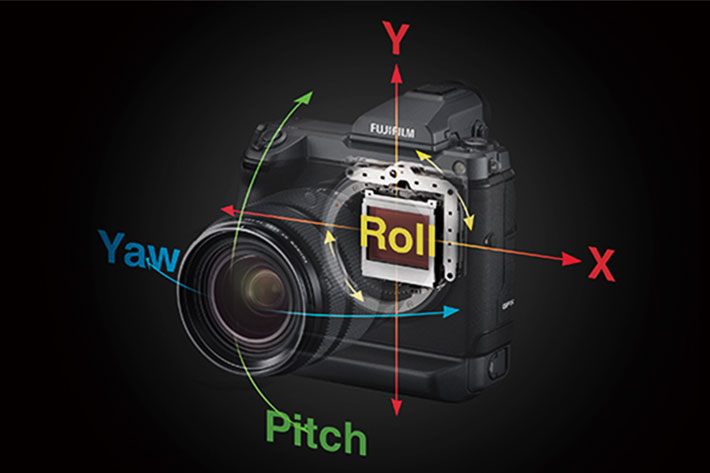 The new image sensor with high-speed readout and the high-performance “X-Processor 4” image-processing engine are behind the camera’s video capability. FUJIFILM says that when “the DCI (aspect ratio of 17:9), a standard format for digital cinema cameras, is selected, the GFX100 records video with a sensor area measuring about 49.5mm diagonally”. The size, bigger than that of large sensors increasingly adopted by high-end cinema cameras, continues FUJIFILM, “results in outstanding high ISO performance, shallow depth-of-field capability and wide tonal reproducibility. This makes it easier than ever before to produce 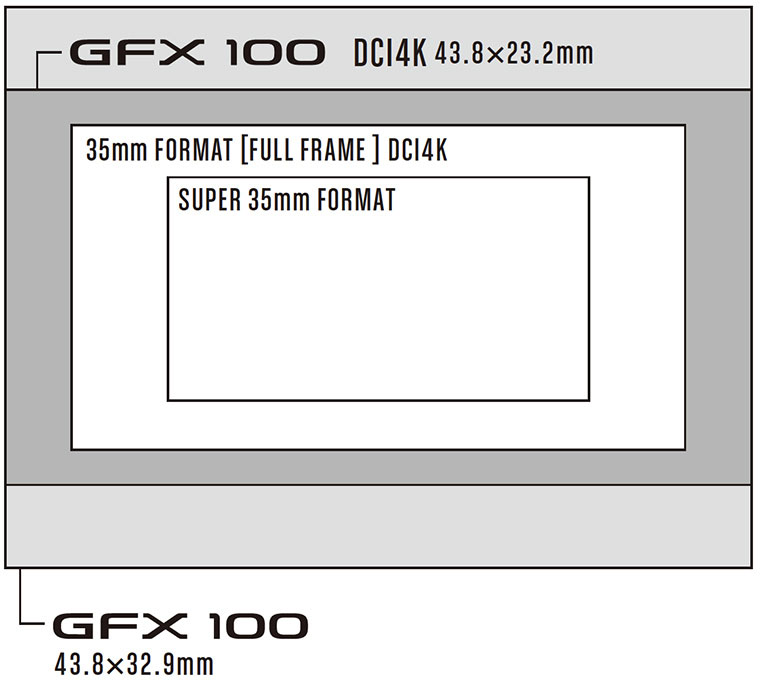 premium-quality video footage with more detailed textures and three-dimensional definitions while even capturing the atmosphere of the scene.”

The GFX100 uses oversampling with the amount of data equivalent to approx. 50.5 million pixels to render video with, adds the company, “exceptionally high resolution”. It also supports the highly efficient H.265/HEVC compression codec as well as the “F-Log” mode that reproduces rich tonal gradation and the “Hybrid Log Gamma (HLG)” for recording HDR (high dynamic range) footage with ease. For the first time in the GFX Series, GFX100’s Film Simulation options, which allow users to enjoy a variety of color and tonal reproductions, include “ETERNA” for simulating the colors and tones of Fujifilm’s cinema film. This enables faithful reflection of videographers’ artistic intentions to video production. 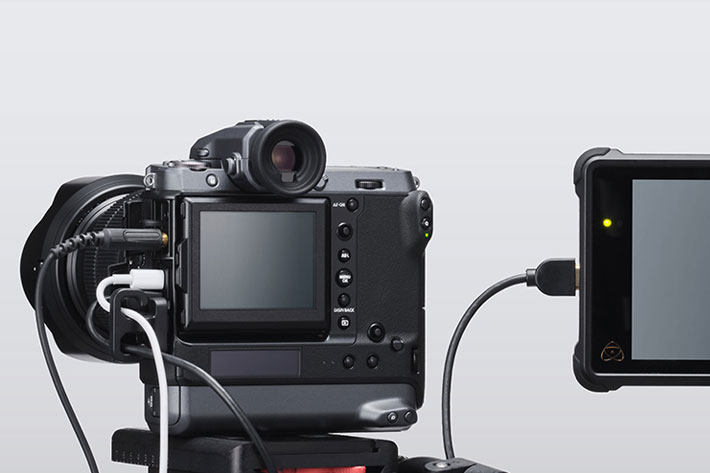 A panel for info, another for the image

Despite featuring the large format image sensor and IBIS, the GFX100’s camera body is compact and lightweight measuring just 48.9mm at the thinnest part and weighing approx. 1,400g. The compact form factor, equivalent to that of digital single-lens reflex cameras with a 35mm full-frame format sensor, ensures excellent mobility.

FUJIFILM points also to the camera body, which “is highly robust due to the use of magnesium alloy and the ‘inner frame’ structure of coupling the image sensor, IBIS and lens mount into an integrated unit. Weather-sealing is applied to 95 locations to make the body highly resistant to dust, moisture and low temperatures, catering to the tough shooting conditions of professional photography.”

One interesting feature is the presence of a new 2.05-inch sub monitor on the rear panel in addition to the main 3.2-inch LCD monitor that can be tilted to three directions. Exposure settings and various other shooting data can be assigned to the rear-panel sub monitor so that the main monitor can be dedicated to checking framing, allowing you to concentrate on composition. It’s a solution that reminds me and seems like and evolution of the two LCDs present in the FUJIFILM FinePix  S2 Pro DSLR from 2002, 17 years ago.

The top panel now features another new 1.80-inch sub LCD monitor, which can be set to the “Virtual Dial Mode,” displaying a virtual dial for simulated operation. This is a perfect function for users who prefer dial-based operations, adopted in GFX Series’ current models. 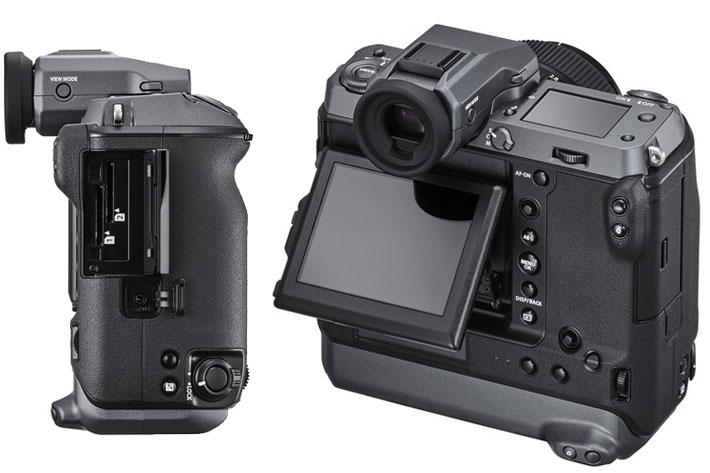 The number of dials, buttons and levers on the camera body has been kept to the minimum for simplicity in camera operation. The top panel features the Drive Mode Dial, which enables instantaneous switchover between the Still Image, Video and Multiple Exposure modes. Each of these modes can store settings such as exposure settings, white balance and Film Simulation selection. That means it only requires just single dial action to recall optimum camera settings, ensuring ease of camera operation. 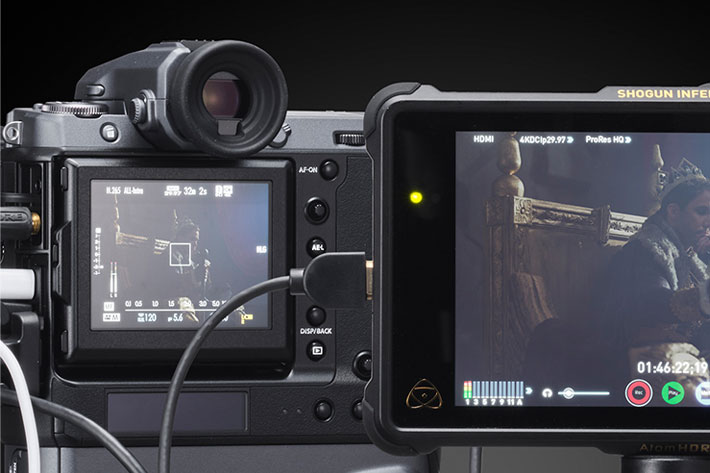 In terms of power, the GFX100 can accommodate two GFX Series batteries (NP-T125), extending the number of frames per charge to approx. 800 when the rear LCD is used.The camera can also be powered and charged through USB connection. Connecting an external battery that supports USB Power Delivery enables even longer continuous shooting and simultaneous charging of the two batteries in the camera.

This is the first GFX Series model that has a supporting IEEE802.11ac 5GHz, enabling even faster wireless image transfer. For RAW processing and tethered shooting, similarly to previous GFX Series models, the GFX100 is compatible with “Tether Shooting Plug-in PRO for Adobe Photoshop Lightroom” and “Capture One Pro FUJIFILM” to accommodate the diverse workflow of professional photographers.