Production tracking and asset management platform for the creative industries 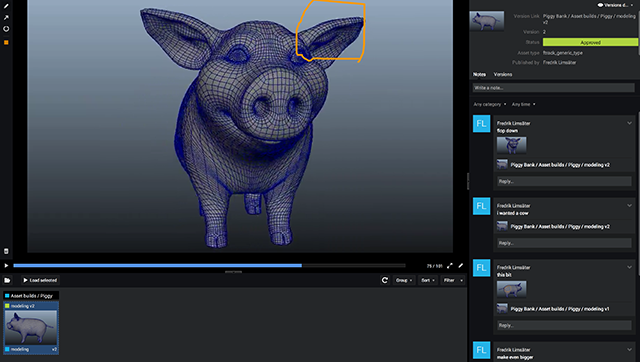 ftrack AB, a leading developer of production tracking and asset management tools has announced the release of ftrack 2.0. The latest version of its out-­‐of-­‐the-­‐box platform brings numerous updates including an entirely updated user interface, new planning and review tools, workflow updates and much more.

ftrack allows users to easily track their production or project, manage assets, review shots, schedule workloads and assigned tasks and collaborate together in one easy-­‐to-­‐access portal. Originally developed as an in-­‐house production tracking tool at Fido Film in 2008, commercial development of the product began in 2011 and it’s already being used by a number of high-­‐profile facilities including Cinesite, Filmmore and Compagnie Generale Des Effets Visuels.

Hans Van Helden, Managing Director at Filmmore comments: “We've been a user of ftrack from early on and this version is a huge leap forward. I love the functionality it provides and everyone at our company finds it incredibly easy to use. ftrack has enabled us to easily manage multiple projects spread across our facilities locations and work effectively with remote artists.”

The workflows in ftrack 2.0 allow users to navigate the platform and get to where they want in as few clicks as possible. Every page, toolbar and menu has been cleaned up and improved, all contributing to the user experience. New additions include :

In addition, asset builds are now a separate entity in ftrack 2.0 and functionality has been added to let users link these to the shots. This automatically gives users access to versions from linked asset builds when working with shots.

Fredrik Limsäter, CEO of ftrack comments: “ftrack has been a passion of everyone involved for a number of years now and we are thrilled to have taken the platform to this advanced level in version 2.0. This is really a coming of age for the offering. The toolsets and interfaces now make it an ideal solution for people working on demanding, quick turnaround projects like commercials. But that’s not all it can do. We think of it as partner for any complex visual project. Any situation that needs a visual tracking and project management system will benefit from ftrack out-­‐of-­‐the-­‐box and that’s the beauty of it.”

Reviewing in ftrack and integration

Review functionality has been added with the release of ftrackreview which allows customers to take advantage of tight integration with a number of industry standard review applications including The Foundry’s HIERO and HIEROPLAYER as well as Tweak Software's RV.

The wider ftrack application also benefits from integration with The Foundry’s NUKE and Autodesk® Maya®.

The cloud service ftrackreview.com, which will allow cloud users to simply load up sequences and review in a browser, will be available later this year and learn more at http://www.ftrack.com

The company is a privately held company led by CEO and Founder, Fredrik Limsater. The development of the ftrack Production Tracking and Asset Management platform started in 2008 and has been used successfully in production since 2009 for both commercials and feature films. ftrack started out as an in-­‐house production tracking tool at Fido Film in 2008 in Stockholm Sweden. Over the years the scope of ftrack expanded and in 2011 ftrack AB was formed by the original developers with the support of external investors.

In early 2013 ftrack AB took its platform worldwide and a collaboration agreement was signed with The Foundry to introduce a next generation, ease-­‐of-­‐use workflow between ftrack and The Foundry's products.

The team behind ftrack has many years of experience in VFX, post production, game and software development helping them understand the challenges each industry face. ftrack is already being used extensively around the globe by clients including Cinesite, Filmmore, BlackGinger, La Compagnie Generale des effets visuels and Fido Film.