Setting up for ice drops and water pours.

The day after my fun with matches, Art Adams came by. We played with fire a bit more, then turned to water and ice.

• After the camera buffers Super Slo-Mo, it writes it out to storage at about 60p, or 2.5 times faster than real time. Don’t watch this playback and think you’re seeing the slowness of motion you shot! As you’ll observe in the video, I had to speed up one shot 2x in post to make it work; it was too slow as shot, but we didn’t notice this because we were watching 60p while recording, as opposed to the 24p of playback.

• Now that I have a separate viewfinder, I could try out my handheld rig idea. I had the Tuner Kit from Hot Rod Cameras and a stub clamp from Shooting Machine. 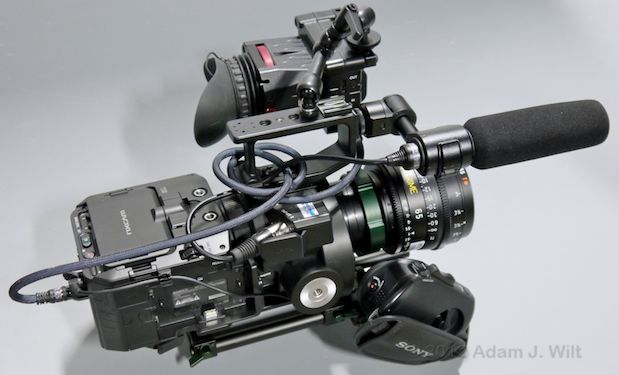 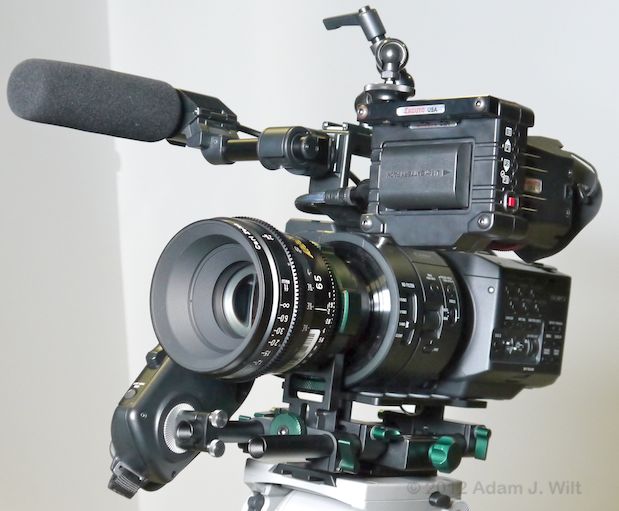 I plopped the rear end of the camera on my shoulder, sliding it back to brace the rear rod holder against me. The EVF is at my eye, my right hand is on the grip, and my left is free to fiddle with the lens.

It works a treat: stable, comfortable, not too heavy.

• The FS700 comes with an AC Adapter that’s separate from the battery charger. It allows you to run the camera while replenishing the battery, a nice touch.

• Cine gamma 4 used for all the shots in the video. Very nice highlight handling.

I own the Zacuto EVF and Panasonic 17″ monitor used in testing.