Couldn’t resist running out and getting this shot. 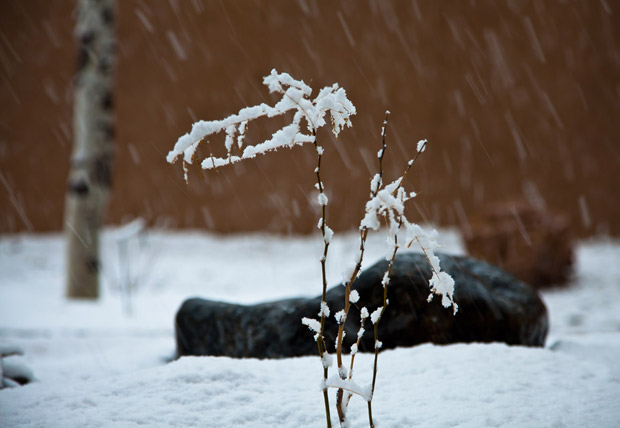 Here in the East Mountains of New Mexico, a pair of winter storms are rolling in. Fitful flurries were followed by miniature styrofoam pellets were followed by real snow, which is now accumulating on any horizontal perch in the perfect still. As dusk was falling, I noticed one of our new seedlings in the courtyard was accumulating snow on its thin branches, so I ran outside quickly with the 5D and snapped some pictures. This was the best (before I started getting too wet); I took several shots until I was happy with the framing of the foreground versus the background. When shooting in show, it's hard to find contrast; I kept moving around until I was happy with what the dark rock was doing as a backdrop, and made sure the aspen on the left and red rock on the right framed rather than distracted from the foreground.{C}

For those who care about settings: Canon 5D mkII with stock 24-105 mm lens, handheld with image stabilization on, natural light (very gray, actually), f/4.5 at 1/40 sec (ISO 400). Below left is the untouched JPEG out of the camera; at the right is the lightly cropped and processed Camera Raw image. Obviously, I boosted the contrast (to make the snow on the seedling stand out from the other snow as well as the background objects), and also increased Clarity and Vibrance to add punch. I didn't touch Recovery or Fill Light; it was gray enough outside that the highlights weren't blown out and the shadows were sufficiently filled in. Normally vignetting (darkening of the corners) is considered to be a negative quality of a lens, but in this case I decided to heighten the effect to further draw focus to the center of the frame, and lend a bit of a “timeless” feel. I accomplished this by playing with the Curves, lifting the Highlights and dropping the Lights to further increase the contrast (if you want to see screen shots of the Raw dialog, let me know in the Comments below and I'll add them). 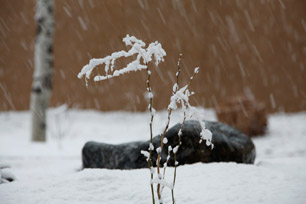 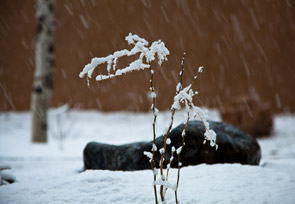 Can't wait to see what the landscape looks like tomorrow…