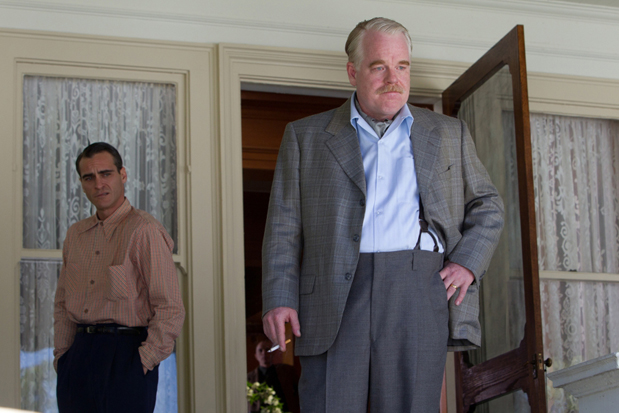 FotoKem provided all the large format and finishing services for Paul Thomas Anderson’s lauded film, The Master, which opened nationally on September 21. One of the most anticipated dramatic features of 2012, The Master has received critical acclaim and film festival honors, including a Silver Lion at the recent Venice Film Festival, and broke a box office record for per-theater-average its first weekend in limited release. Produced by Annapurna Pictures, the film is being distributed by The Weinstein Company.

FotoKem was an important collaborator on the project from the beginning, devising a hybrid workflow necessitated by the mix of 35mm and 65mm film origination. As Anderson increasingly relied on 65mm to tell the story of a lost soul (Joaquin Phoenix) attracted to a charismatic leader (Philip Seymour Hoffman), FotoKem became more involved in the completion of the film. The 65mm component of the movie eventually grew to nearly 75% of the final cut.

In addition to processing all the 65mm negative, FotoKem devised a seamless workflow for creating 35mm reduction work print dailies from the 65mm negative, completing the final color grade for the film, and producing digital cinema deliverables. FotoKem also created a small number of 70mm prints for those theaters capable of projecting the large format.

Over the course of the project, FotoKem worked directly with Anderson to ensure his vision was served, and that his goals were thoroughly supported at the facility. “This collaboration was an amazing experience that allowed us to work with an artist of Paul’s caliber, and to build a positive working relationship with one of the most talented directors of this generation,” says FotoKem’s Andrew Oran, VP of large format and restoration services. “We did a lot of testing at every step of the way to make sure that each frame of film was exactly as Paul wanted it, and that our approach for handling each format – 65mm, 35mm and ultimately digital as well – achieved Paul’s distinctive vision for the film.”

The Master was a cut negative project in both 65mm and 35mm formats. Oran explains, “We assembled and answer printed the 35mm scenes, and then optically blew them up to 65mm duplicate negative for inclusion in a complete 65mm negative cut of the film, from which 70mm release prints were produced. That same 35mm original negative was cut into a 35mm reduction negative of the movie which was produced from the 65mm material, making it possible to produce release prints in each format from original negative.”

Oran notes that Anderson has brought an entirely new and important aesthetic to 65mm filmmaking. “In The Master, Paul Thomas Anderson has shown eloquently that 65mm works incredibly well for an intimate, character-driven film, not just those with epic backdrops. He recognizes the emotional power and depth of the large format, and delved into it in a way that is very rarely done. In so doing, he has advanced the power and beauty of 70mm storytelling and elevated moviemaking to exciting new heights.”

FotoKem is an independently owned, full-service post production facility that has become the go-to resource for the worldwide creative community. Since 1963, the company has serviced every corner of the entertainment market, providing unmatched expertise, high-end solutions and innovative technologies. The company’s systems approach to the imaging chain assists filmmakers in successfully bridging production and post, and supports them in navigating the many formats and choices for telling stories. FotoKem offers a broad spectrum of services, including file-based workflows, 3D, digital intermediates, digital cinema packages, mobile dailies, global data delivery, film and video finishing, audio mixing and mastering, visual effects, full service film lab, restoration, and production rentals. FotoKem has expanded over the years with the acquisition of SPY, Keep Me Posted, Margarita Mix and L.A. Studios.