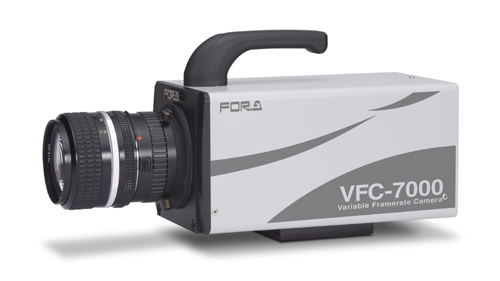 FOR-A, a leading manufacturer of video and audio systems for the broadcast and professional video industries, will introduce the VFC-7000 HD Variable Frame Rate (Super Slow Motion) Camera at the 2010 NAB Show in Las Vegas, Nev., April 12-15 (Booth C5219). It offers high-speed play out and recording in full frame HD (1280×720) at up to 700 fps, and allows for the recording speed to be varied from 125 fps to 700 fps.

“Super Slow Motion video is an essential part of many creative projects in medical and sports applications,” said Hiro Tanoue, president, FOR-A Corporation of America. “We’ve designed the VFC-7000 to be extremely easy to use, so anyone can capture the desired rich detail of action video in uncompressed HD.”

With its light weight, the VFC-7000 is easy to carry with the integrated handle. It comes complete with camera head, main body, an F lens mount, and recording component in one integrated package. With its high-sensitivity CMOS color sensor, it features an electronic high-speed shutter that can operate as fast as 1/200,000 second for filming fast moving events and subjects without blur.

The unit also includes internal storage memory for 2.3 seconds of HD recording (full frame), which is expandable to about nine seconds with optional maximum memory installed. The Ethernet interface offers high-speed transfer of footage to an external storage or production system. The VFC-7000 is equipped with two channels of HD-SDI output, which also allows the user of the camera to provide a live video output while at the same time outputting recorded video stored in the camera in parallel.