Back in late February, a chap named James Flynn put up a Kickstarter page for Luxi: “Luxi turns your iPhone into an incident light meter.” He hoped to raise $10,000 to build the thing; 45 days later he had $120,921. I threw some money in the pot in mid-March, and earlier this month two Luxis showed up on my doorstep: one model for an iPhone 4 or 4S, and one for an iPhone 5. Here's a first look at what Luxi is and how it works. 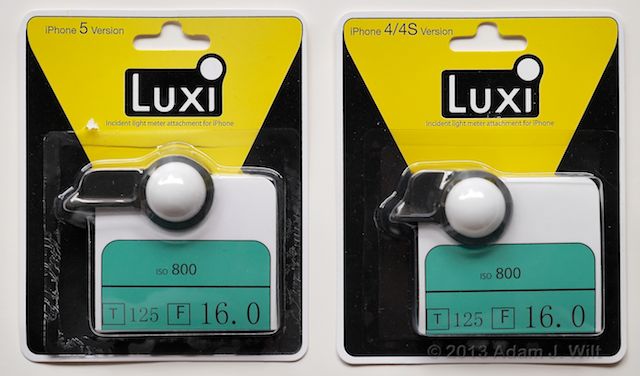 Luxis as shipped… almost. I'd already opened the iPhone 5 version before taking this photo.

Luxi (US$29.95 from Luximeter.com) is a small, clip-on white hemisphere covering an iPhone's front camera, letting it read incident light the same way an incident meter does. There's one version for iPhone 4 and 4S, with the front camera offset to the left, and one for iPhone 5, where the camera is centered above the screen. Interestingly, the front camera placement on iPod touch 4th and 5th generation models is very similar to that on iPhone 5, making them candidates for lower-cost incident metering. 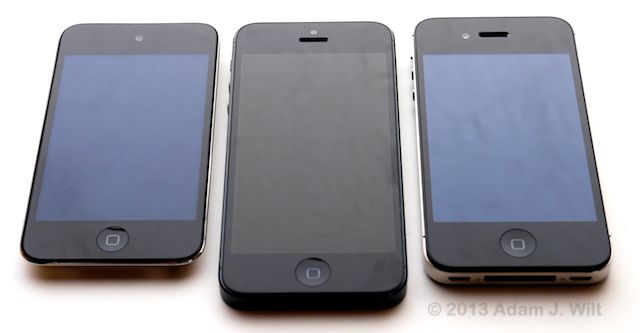 Luxi isn't a half-baked, slap-dash affair: it comes with a small wrist lanyard and a carrying pouch, evidence that Mr. Flynn and company have thought about more than the simple action of sticking a photosphere onto an iPhone. The lanyard is handy if you're popping Luxi on and off the phone and don't want to lose it; the pouch provides protection between gigs. 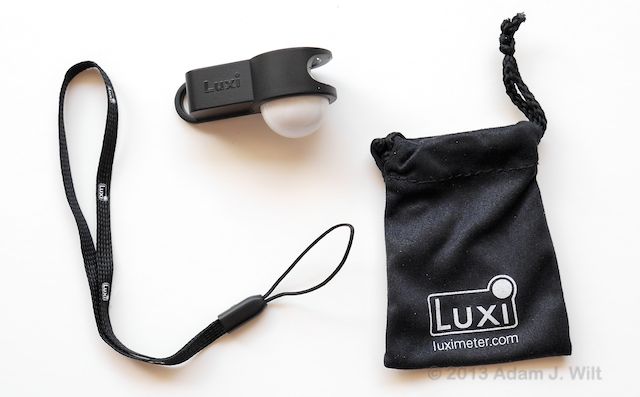 Luxi itself is more than a simple phone-capping lump o' plastic with a white bubble; it's clear that some serious prototyping went on prior to production. The front side of Luxi includes a waffled rubber insert, providing friction against the iPhone's smooth glass face so that Luxi stays put (though a hearty shake will dislodge it – that's why there's a lanyard!). The back side is a molded spring clip with a nubbin that presses against the back of the phone. The waffled pad and the nubbin keep Luxi attached, while the rest of the form-fitting cap positions the photosphere in precisely the right place. 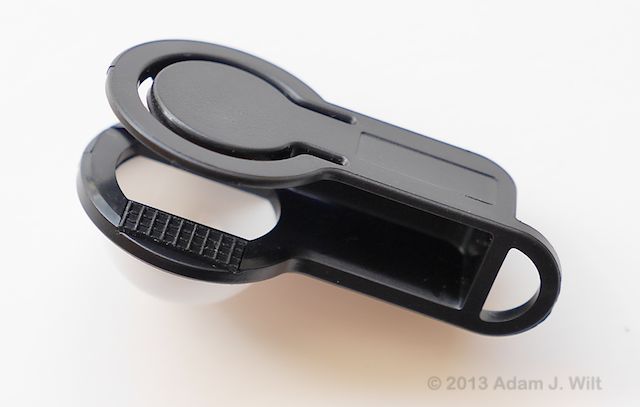 Looking up into the Luxi photosphere from below. Note the waffled friction pad. 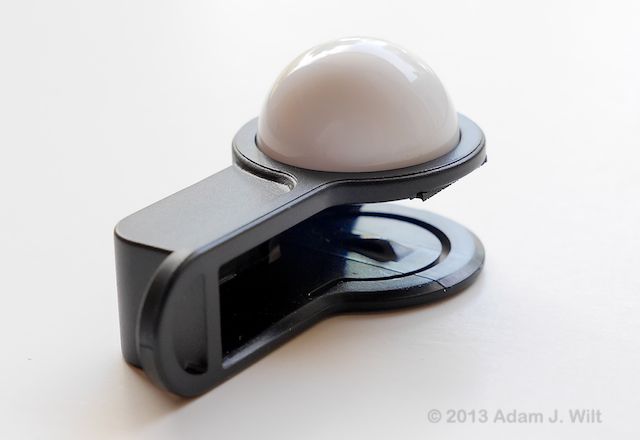 Looking up into the Luxi photosphere from below. See the nubbin on the spring clip?

In practice, Luxi slips onto the iPhone with just the right amount of resistance; it's easy to attach and remove, yet holds firmly enough in place that it's not at risk of falling off in normal operation.

Luxi attached to an iPhone 5: photosphere covering the front camera. 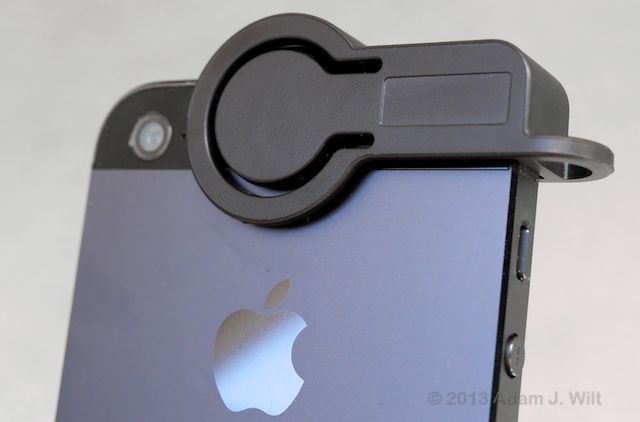 Luxi attached to an iPhone 5, as seen from the rear.

With Luxi fitted firmly in place, fire up a light-metering app that uses the front camera and start measuring light: I used Pocket Light Meter, which has been updated specifically for Luxi. 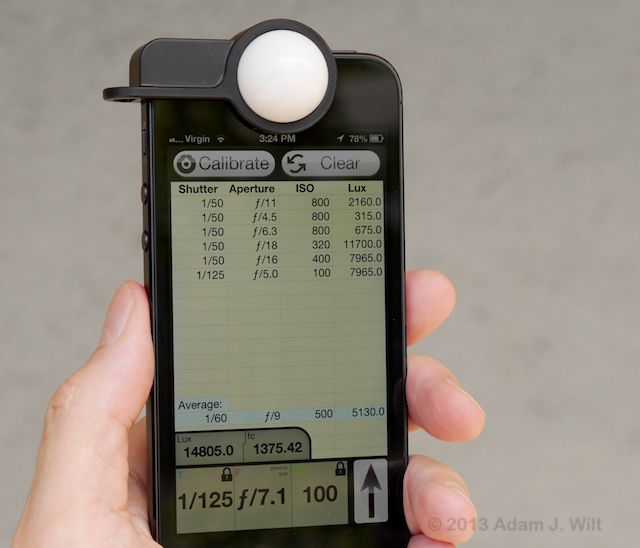 Next: How well does it work?

How well does it work? 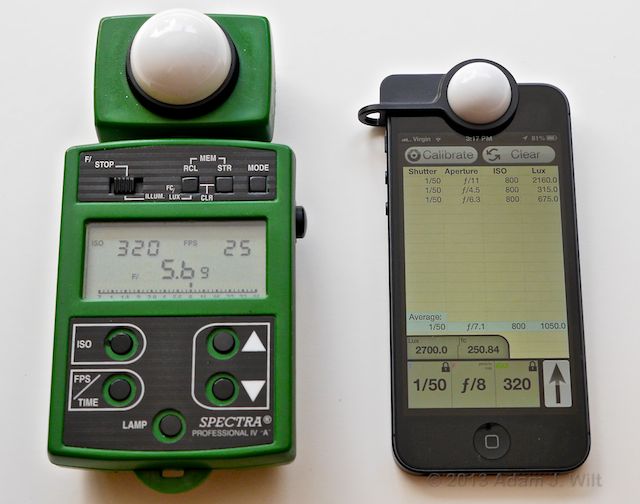 Calibrating the rig with a Spectra Pro IV 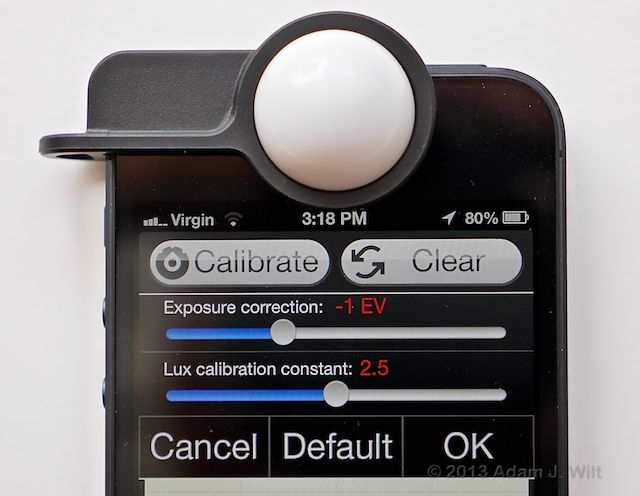 Pocket Light Meter has two calibration sliders, one for exposure adjustment, and one for lux/fc fine tuning.

When I put the Luxi on my iPod touch 4G, an Exposure correction of – 2/3 EV seemed to work better. I didn't check the Lux calibration.

Pocket Light Meter appears to work by “successive approximation”: it behaves as if it tells the camera to repeatedly acquire and lock exposure until the exposure value settles into an unchanging state (there are very good reasons for doing this, but that's a topic outside the scope of this article; besides, I don't know that Pocket Light Meter works this way, I only suspect it). Once the exposure settles, Pocket Light Meter computes the brightness value from the camera's exposure reading – but such readings are subject to the whims of the camera module in your particular iDevice, which is why I needed different calibrations depending on the iDevice I was using.

I did find some difference (+/- 1/2 stop) in the final reading on the iPod touch 4G in lower light conditions, depending on whether Pocket Light Meter was first shown a bright light before it settled, or was first shown darkness (I covered it with my hand, then exposed it to the scene). That's likely due to the exposure program running in the iPod's camera module. The iPhone 5 showed no such variation depending on initial conditions.

“But wait”, you say, “Luxi on an iPod touch?” Yes: iPod touches are thinner than iPhones, so the Luxi won't fit snugly in place, but the photoshere still winds up in the right place, more or less: the camera on the iPod touch 4G is 3mm lower on the faceplate than the iPhone 5's camera is, but it easily falls inside the Luxi's 10mm tall “window” and well within the 20mm diameter of the photosphere (yes, the exposure may be biased towards the lower half of the photosphere as a result; I'd have to test this more rigorously to see if that's a concern). As to the thickness issue, a small pad of gaffer tape would bulk up the touch, in a pinch (grin), or a small block of foam could be wedged in between the Luxi and the back panel.

“The best camera is the camera you have with you.” That saying might also be extended to light meters. Before Luxi, incident metering with iDevices wasn't possible; with Luxi, $30 buys you an elegant and practical photosphere to turn your front camera into an incident meter.

It's early days yet; I've only done some informal testing, but it does look like Luxi is useful for serious work – with the caveat that Luxi is a passive diffuser and thus it's totally dependent on the accuracy of both the camera hardware and the application software used with it. Using Pocket Light Meter, I had more consistent results on my iPhone 5 than I did on my iPod touch 4G (in fairness, Luxi wasn't designed for the iPod touch); the iPhone has a better camera module in it. I haven't tested Luxi on iPhone 4/4S or on iPod touch 5G, so I can't speak to the accuracy of their cameras in this application.

To date, Pocket Light Meter is the only app I can find that's Luxi-compatible (such apps will be listed on Luxi's home page).  I look forward to adding Luxi compatibility to my own Cine Meter application. I suspect I can get very good accuracy and consistency out of it, too, even on iPods. Stay tuned…

[There is another up-and-coming incident meter attachment for iPhones, the Lumu (which asked for $20,000 on Kickstarter, and raised $244,085). It's an active device that plugs into the headphone jack; it's not dependent on the iPhone camera module. It's $130 – $150, and it's very elegant-looking. It will read at lower light levels than an iPhone camera can and it may be more accurate than a camera-based light meter even at “normal” light levels. It also works on the Samsung Galaxy Note 2, Galaxy S4, and HTC One (so far; the list may grow) as long as they're running Android 4.1 or higher.

My fear with the Lumu is that it's a rather expensive little thing to have sitting in the headphone jack where it's liable to get whacked and bent. Both the Luxi and Luma are also far too easy to stick in a pocket and sit on, or to drop on the floor and step on, but the Luxi is only $30 to replace if (when) you do so.

The good news is that there's room in the world for both!]

Disclosure: I put $28.00 into the Luxi Kickstarter project and got two Luxis as a result. I plan to integrate Luxi into the next release of Cine Meter for iPhone once my work schedule allows. Aside from that, there is no material connection between me and James Flynn, Extrasensory Devices, or NuWaste Studios (the Pocket Light Meter folks), and no one has offered me compensation or other blandishments for a review, positive or otherwise.