GoPro announces the release of their best, most advanced HERO camera to date, the GoPro HERO9 Black. I got a chance to start testing one out and here is my first look hands-on with the GoPro HERO9 Black: More power with a new 23.6MP sensor. More clarity with 5K video and 20MP photos. More stability with HyperSmooth 3.0 and Boost in all settings. More speed options with TimeWarp 3.0 and slo-mo in up to 4K. More creativity with a front-facing LCD screen. And, more battery life to power it all.

*Disclaimer: Since I live in the Sierra Foothills of Northern California, I had little time to do extensive outdoor testing with the HERO9 Black due to the horrendous air quality we’ve had (upwards to 500 on the AQI at times), so suffice it to say, I’ll be providing a much more extensive features test and comparison with previous models in soon when it’s safer. For now, enjoy the limited outdoor tests and images along with some creative “indoor activities” for all of us working from home and stuck inside!

HERO9 Black’s 23.6MP sensor is the most significant imaging hardware upgrade since a 12MP sensor was introduced with HERO3 in 2012. 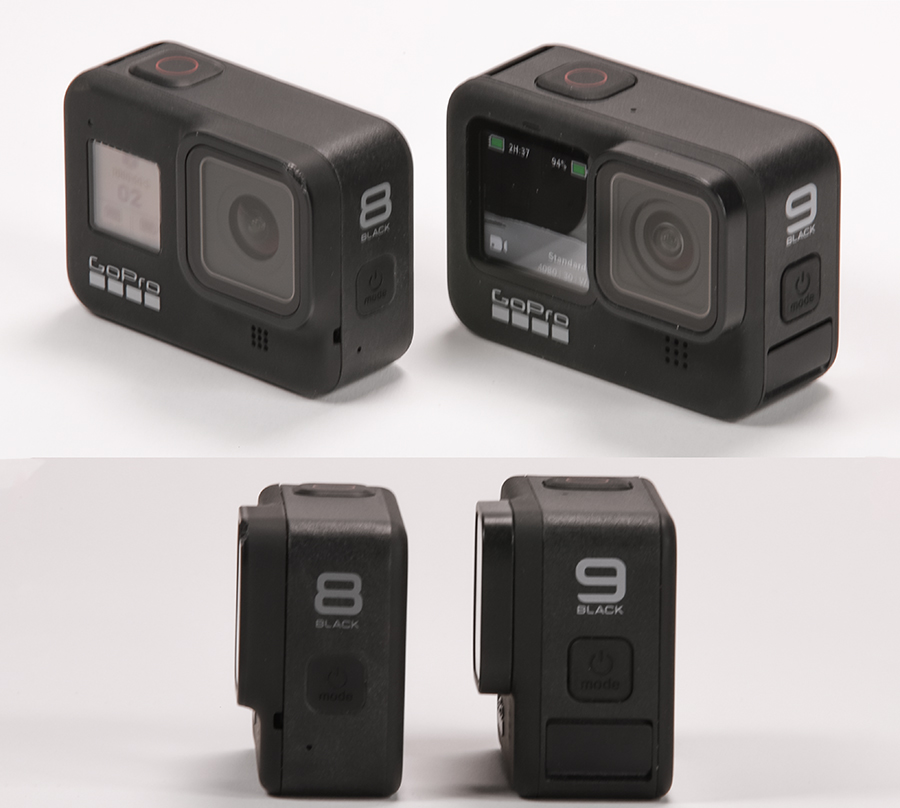 What I see in so many of these new features is that GoPro is really taking customer feedback to heart. Some of the biggest complaints I’ve heard over the years, like battery life, displays/menus, changeable lenses/filters and image quality are answered with this release.

The first thing you’ll notice is the larger size over the HERO8 Black. This is to accommodate a 30% larger battery, larger sensor and larger screens on both the front and back. While the HERO9 does fit all previous GoPro mounts, the accessories and mods will not fit. 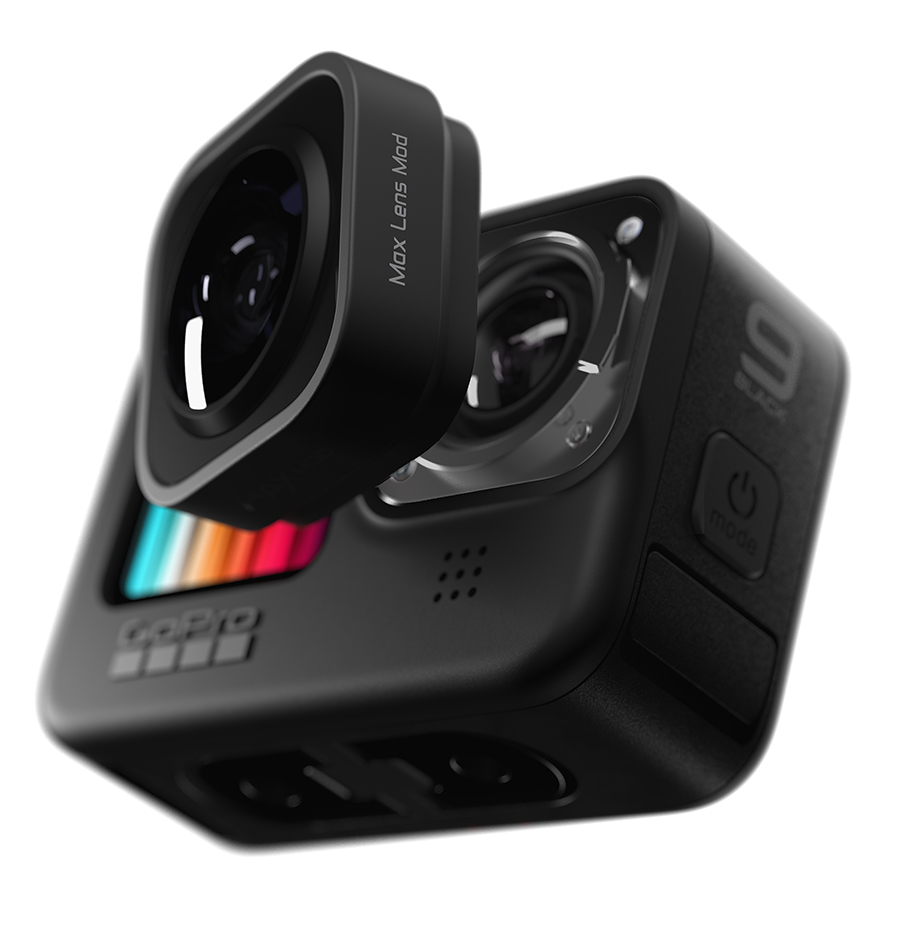 What I’m most excited about is the ability to remove the lens cover to swap out lens mods, such as the soon to be released Max Lens Mod which is a super wide angle lens adapter that the HERO9 Black has a built-in setting that utilizes the GoPro MAX technology.

My hope is that PolarPro and other 3rd-party manufacturers develop some Macro and Zoom lens covers and ND filters soon that will fit – especially if GoPro opens up their API to allow them to read the lenses correctly.

*Note that the HERO8 Black Media Mod and the Light Mod is currently available on GoPro.com as well as at select retailers. 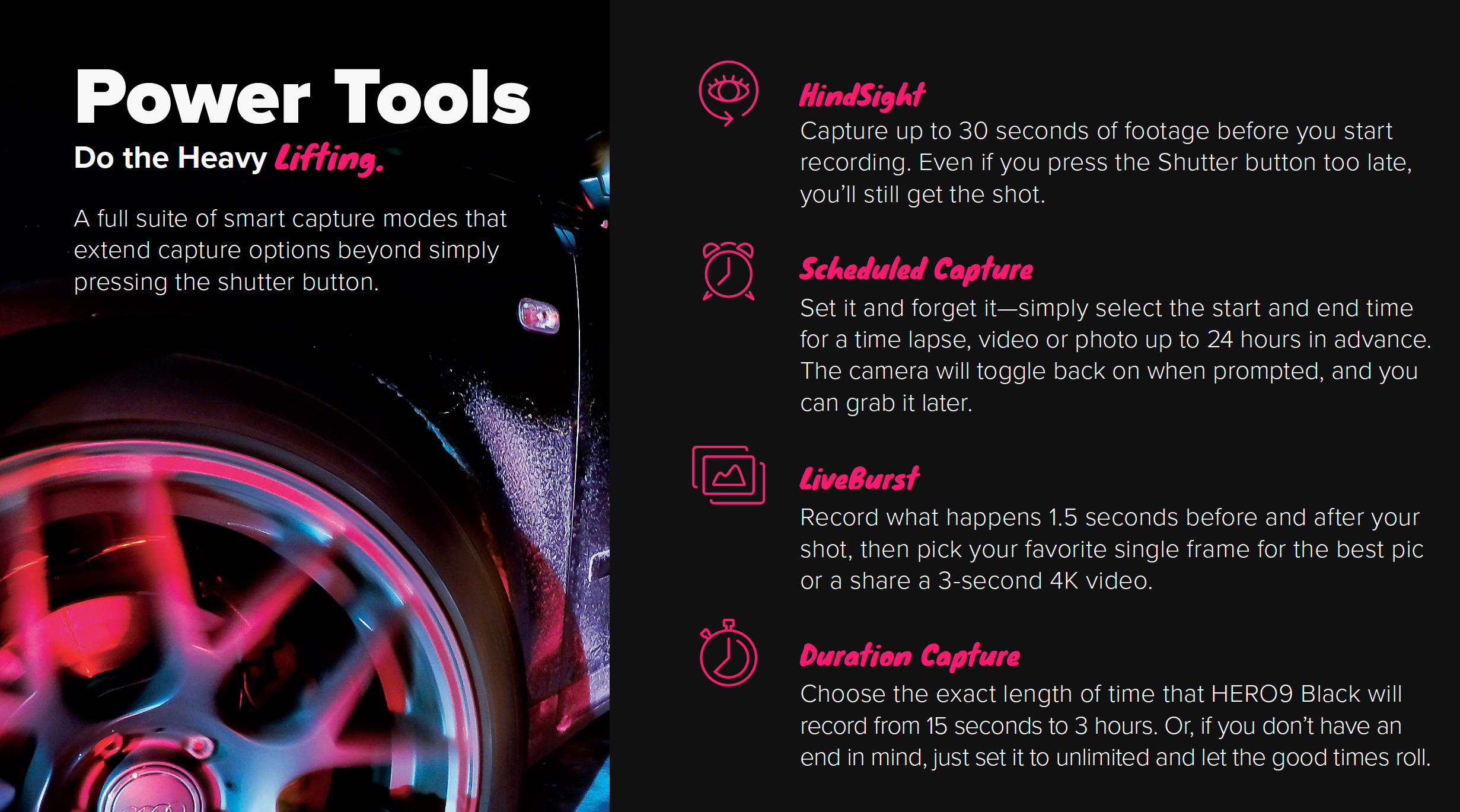 The GoPro subscription service delivers the best value and end-to-end experience to GoPro users. GoPro subscribers benefit from no-questions-asked camera replacement; unlimited cloud storage of their GoPro photos and video at original quality; enhanced live streaming to GoPro.com with fewer restrictions than other live streaming services; up to 50% on mounts and accessories at GoPro.com, including the brand-new lineup of GoPro Lifestyle Gear; plus, up to $100 savings on new camera purchases. The GoPro subscription is available for $49.99 annually or $4.99/month.

HERO9 Black is on sale internationally starting today on GoPro.com and at select retailers around the world (such as FilmTools.com, our sponsor). The camera retails for $449.99 MSRP or on GoPro.com for $349.98 with the purchase of a one-year subscription to GoPro. Existing GoPro subscribers can also take advantage of the $349.98 pricing at GoPro.com.

*NOTE: I’ll be showcasing all of the available GoPro Products in my next hands-on review soon to detail the features and comparisons between the current models.

As I mentioned above, I didn’t have the time or ability to test all the new features of the HERO9 Black just yet, but I’m planning on do some real world tests of some of the “Power Tools” added like Hindsight, Scheduled Capture and Live Burst modes in an upcoming review article. Here are a few features I was able to get in before the product release announcement:

I tested the latest Time-lapse feature on a trip to the office where I work for a biotech company in the San Francisco East Bay from my farm up in the Sierra Foothills in Northern California. It’s a 125 mile trip one-way so I set the HERO9 Black to capture one frame every 2 seconds and used a GoPro power pack and grip to attach it to my display console in my Toyota RAV 4 Hybrid. I didn’t have to worry about some occasional “bounce” with this setup as it was capturing still frames every 2 seconds, so they’re not noticeable at all in the playback. 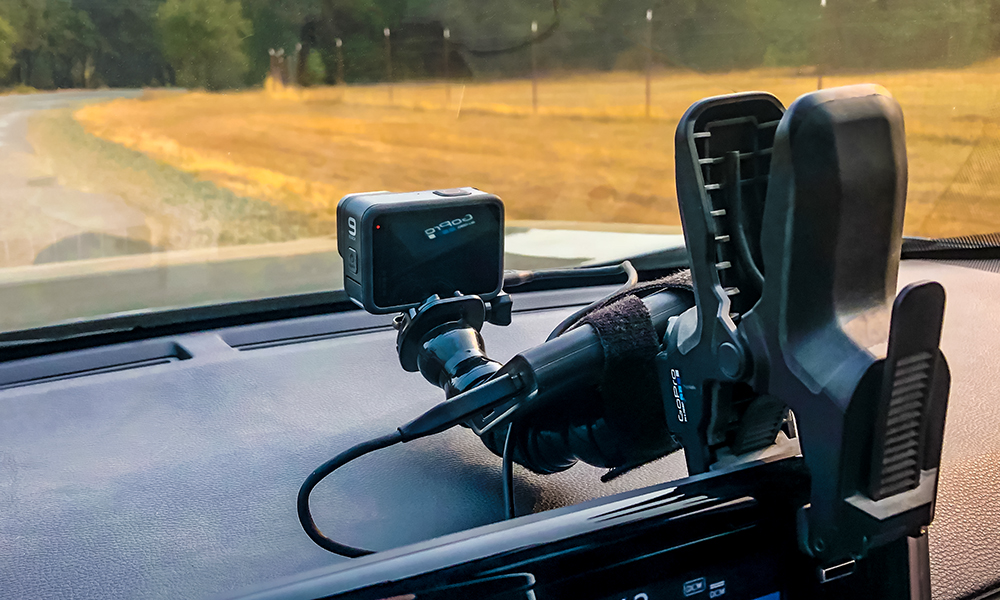 Here’s the resulting video – 2 hours compressed to under 2 minutes for the 125 mile one-way trip.

While the HERO8 Black with the Media Mod attached worked well with the new GoPro Webcam app, I couldn’t get the HERO9 Black to work on our iMac 27″. My wife teaches music and voice coaching globally and relies on a solid production environment. We first tested a HERO8 Black as a web cam for her on Zoom and I know now that I’ll never see it back! (shown below)

The HERO9 Black however would not connect to her older iMac but I did get it to work on my more recent MacBook Pro 15. There are also issues with it working with Microsoft Teams but there is a posted workaround from the Microsoft community for now. I’m hoping these issues will be resolved soon with an updated firmware release. 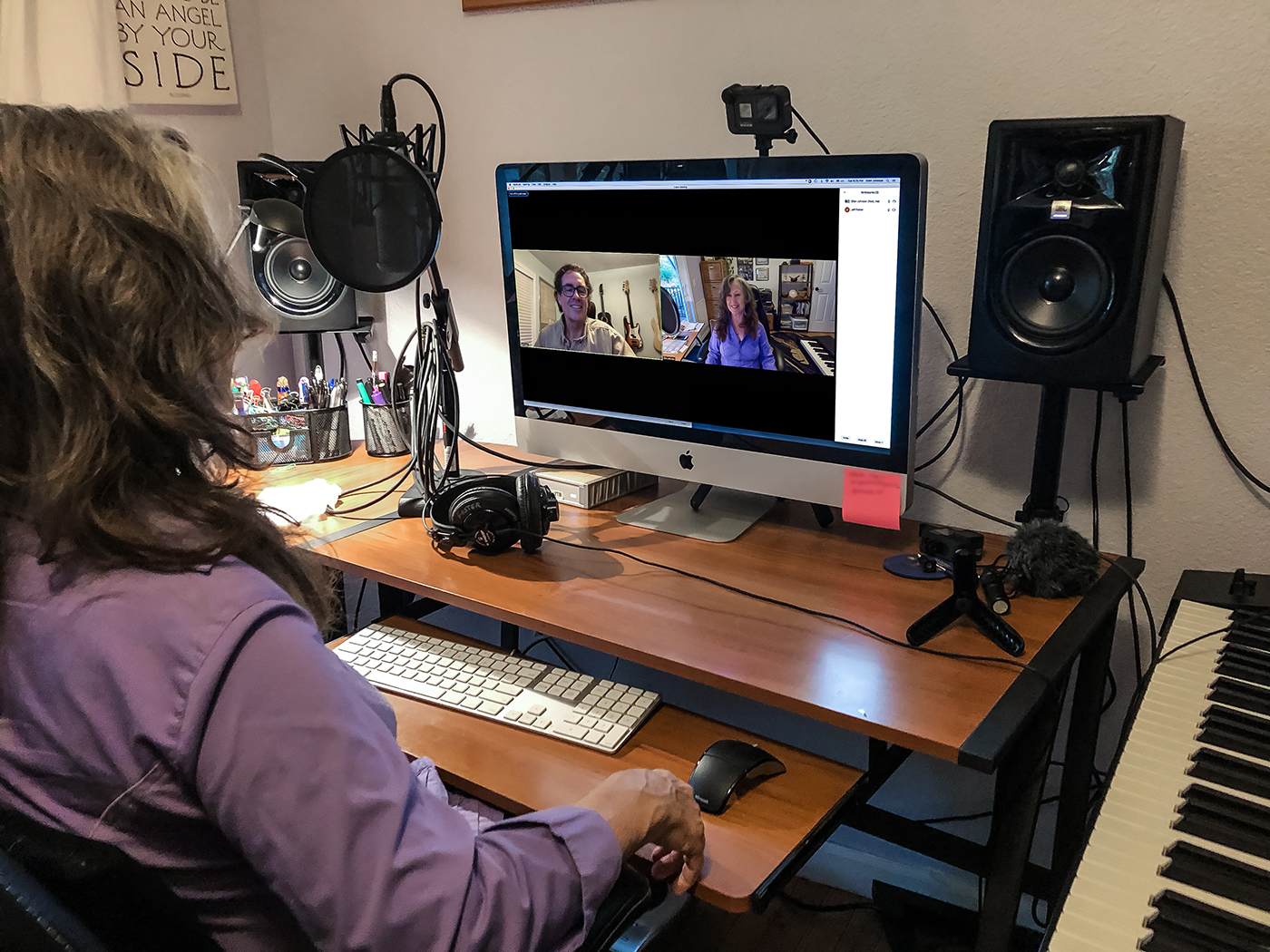 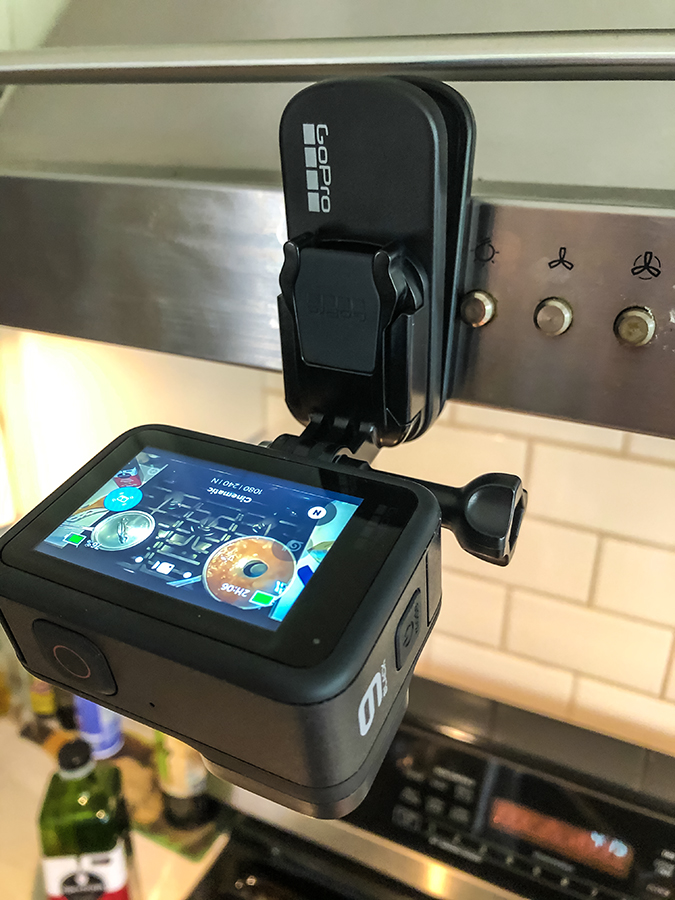 So what do you do when you’re stuck inside all weekend because the air quality is deemed “Hazardous” fro the wildfire smoke? You COOK!! My favorite hobby is cooking – and since the COVID-19 SIP order started in March, we’ve been eating at home 100% of the time – and luckily, we’ve been able to grow some of our own produce on our small farm as a result.

I’ve been wanting to do some YouTube cooking videos from some of my favorite recipes ranging from homemade New York style bagels and Brioche Rolls to southern style greens in the InstantPot and various savory Indian dishes. Here I was finishing up some green lentil Dal and Chicken Tikka Masala on the stovetop and slapped the HERO9 Black with the magnetic clamp grip to the hood range to capture some of the splattering mess in slo-mo.

I shot this at 240fps (1080p) and edited it to play back at 30fps in Adobe Premiere Pro. I can see where this could go with a good quality macro focus Lens Mod someday, but enjoy some splattering goodness from the kitchen:

With the new front-facing color screen on the HERO9 Black, it’s really easy to frame yourself in the shot and whip the camera around to capture the world around you. The improved built-in microphones are great at cancelling ambient noise and capturing your voice – and with the new Media Mod, the additional mini shotgun mic with foam windscreen will give you an even better capture, or you can add an external lav mic if you wish. (I’ll test this out further in my extensive review soon). 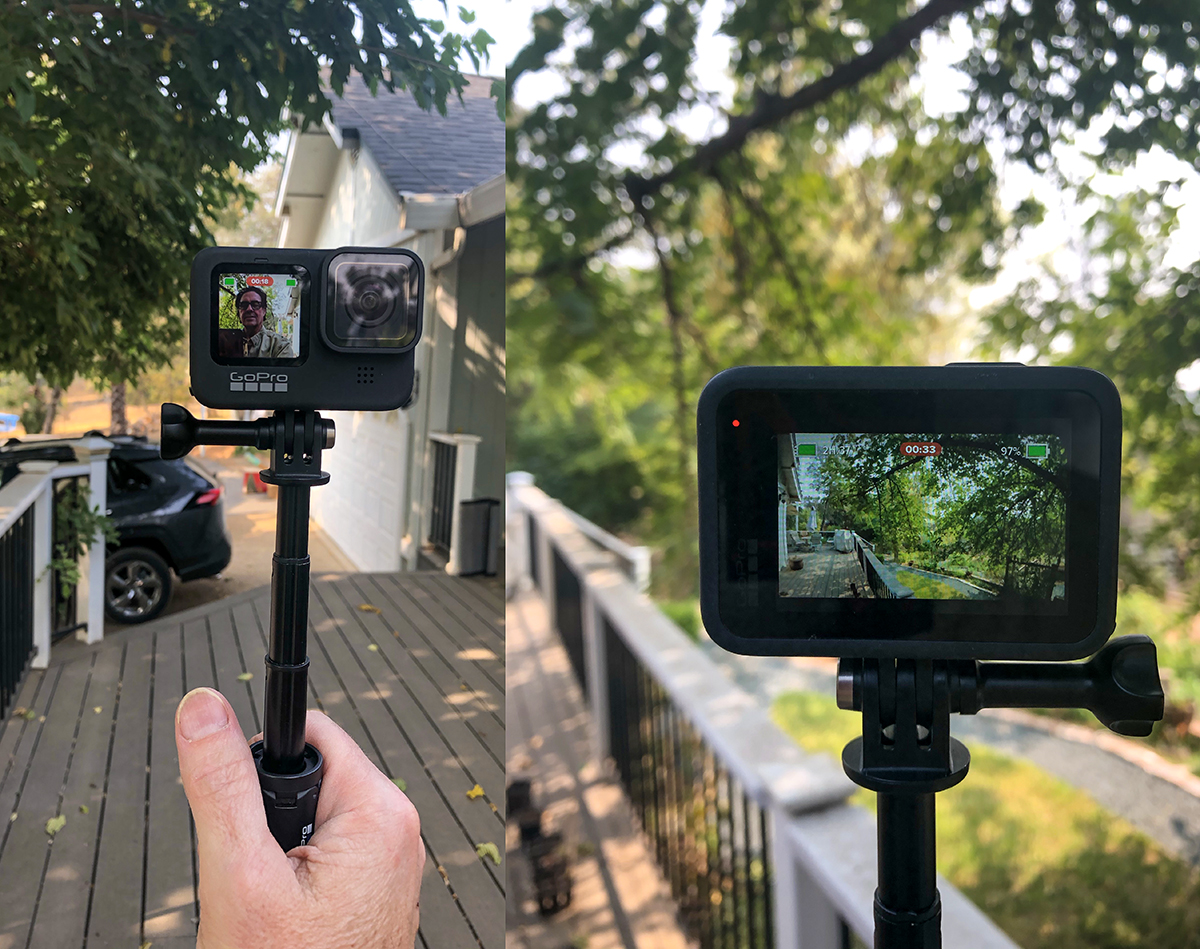 There’s just so much more to explore with still image capture that I haven’t had a chance to try out yet on the improved 20MP sensor – including Scheduled Capture and Night Lapse for starry skies. I’m looking forward to clearer smoke-free skies soon to try out all these features properly, but for now, I offer you an in-studio shot of my prized 1971 Fender P-Bass with the factory Fretless fingerboard, EMG active pickups and a vintage Wilkenson 5-String Conversion bridge. I’m impressed with the improved dynamic range of still images from the new sensor in the HERO9 Black so far, and with more Lens Mod attachments, hopefully get some closer focal range options in the near future.

With the ability to shoot in 5K video, you can also get clear frame-grabs from your action footage to produce clear and crisp still images on the fly and capture that EXACT moment you were hoping to get.

Check back for updates and my full hands-on review of the entire camera lineup from GoPro soon, including all the features mentioned above and a HERO8 Black/HERO9 Black comparison, as well as the GoPro MAX 360 cam. 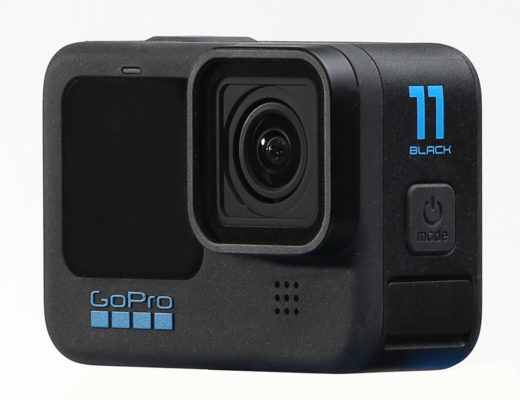