Hands-on look at the Fusion 360 camera and what you can do with it.

The GoPro Fusion is the long-awaited 360 VR camera that shoots a full spherical 5.2k video with seamless stitching and Overcapture for complete scene coverage. The Fusion desktop software does a remarkable job of stitching and much more; while the Premiere Pro plugin provides the ability to “reframe” your spherical shots into high quality 1080p pans, tilts and zooms from a standing shot – allowing the action to move in the world around you. In this first look article, I explore some of these basic features and provide examples.

The GoPro Fusion is the long-awaited 360 VR camera that shoots a full spherical 5.2k video with seamless stitching and Overcapture for complete scene coverage. The Fusion desktop software does a remarkable job of stitching and much more; while the Premiere Pro plugin provides the ability to “reframe” your spherical shots into high quality 1080p pans, tilts and zooms from a standing shot – allowing the action to move in the world around you. In this first look article, I explore some of these basic features and provide examples.

The Fusion comes with the everything you need to get started, including the Fusion camera and protective case, battery, USBC charging/link cable, two heavy-duty sticky mounts and the Fusion Grip with telescoping handle with a tripod base. It does require 2 micro SD cards and the faster the better:

Since the Fusion is essentially two separate cameras in one housing, it requires two micro SD cards that record each hemisphere. The Fusion studio software does the work of stitching the two halves together seamlessly and allows for further editing decisions in post.

On a practical note, the protective case for the Fusion is something you’re never going to want to lose, as you can’t ever really lay down your Fusion as it has a lens on either side. Trying to balance it on its edge only leads to an eventual topple-over and risk scratching the lens. The nice thing is that the case attaches to the camera even when it’s mounted to the Fusion Grip or other mounts, such as a tripod, so it’s easy to keep it protected until you’re ready to shoot.

The Fusion camera casing is waterproof, so all weather and adventure conditions can be shot without a worry, as you may have with other 360 action cams. And the stabilization is pretty remarkable from my limited handheld tests (many more action testing coming in my next article). The Fusion also records 360-degree audio for a truly immersive playback experience.

And like other GoPro models of late, it also feature voice command controls.

I’ll be exploring more of the photo and time lapse modes in my next article segments.

Check out these GoPro Fusion tips on how to setup and use the Fusion camera and software/apps.

The GoPro Fusion Studio is where all your footage comes together. If you just want to stitch your footage do a basic clip edit and color correction or other basic options, you can prep your footage right in the Fusion studio and upload it to YouTube or Facebook straight-away.

You can make basic color/exposure adjustments and select the GoPro Protune color output or a flat cine color that you can adjust later in Premiere Pro.

Since this is the first version of the Fusion software, it’s lacking a lot of features you might otherwise expect from GoPro, such as adding a music soundtrack or combining clips, adding keyframes for different Overcapture controls, etc. – and I’m sure they’ll be working on that for a future version – but this version 1 build seems solid and does a great job of seamless stitching and rendering your footage clips.

Full 360 VR test on YouTube: Using the Fusion app to render a full 360 VR that can be viewed on your smartphone by panning around to view the scene or using your mouse to pan inside the video frame window.

Another standing test in our green screen portrait studio (spin around – you’re in the action!) 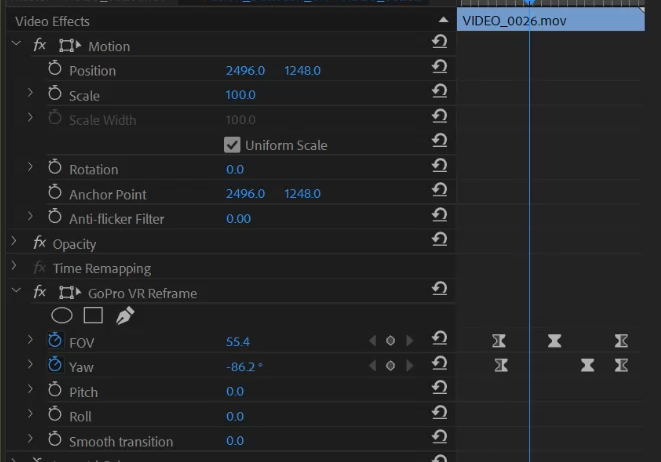 If you’re shooting with the Fusion to capture events and locations where you want to edit after the fact and still select a full HD capture of just what you want to focus on, then using the GoPro VR Reframe plugin in Premiere Pro will provide what you need.

Applying the plugin to your footage clip on the segment timeline will allow you to add keyframes to adjust everything from Yaw, Pitch Roll and POV – which results in your footage looking as if you had a remote gimbal or a second camera operator at your event.

See before and after how it works in Premiere Pro:

Example event capture VR Reframed & Tiny Planet edits: I basically just stuck the Fusion 360 on a tripod and let it record a few minutes at several locations. In some cases I rendered out a “Little Planet” (Overcapture) segment from the Fusion software, and the rest I used the GoPro VR Reframe plugin in Premiere Pro to pan, tilt and basically re-frame the POV I wanted to focus on in the scene around the cam.

The Overcapture option in the Fusion software creates a “Little Planet” effect and other possible POV framed options when you render out your footage. Options for different types of delivery are available if you’re posting to Instagram, YouTube, Facebook and more – so you can adjust your aspect ratio and file output options.

Making simple adjustments to the FOV, Yaw Pitch and Roll can provide various creative options to help you tell your story in an interesting way. 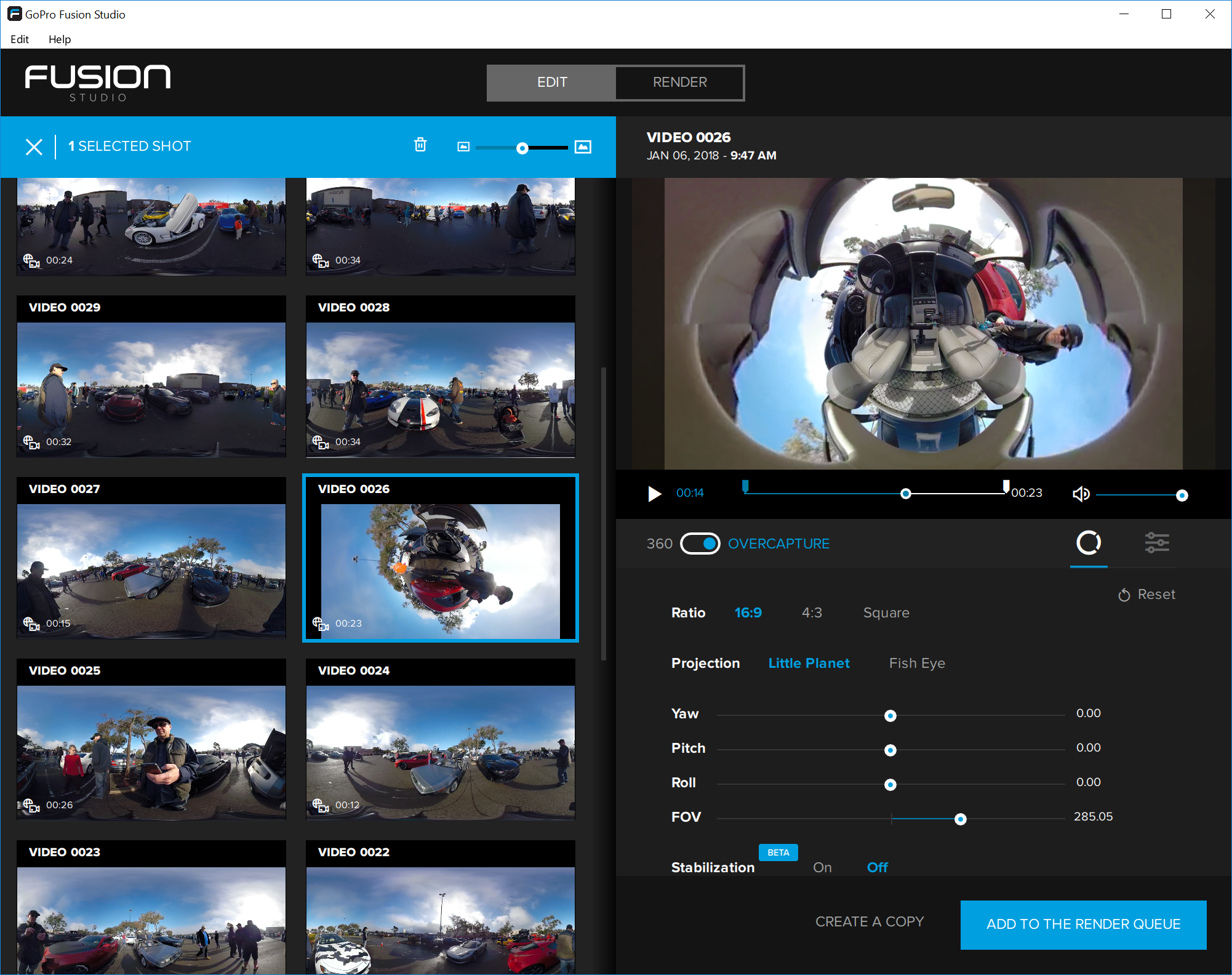 Here’s an Overcapture test from the handheld Fusion hovering inside a DeLorean. I used the Stabilization setting and adjusted the FOV out and added some Pitch and Roll to adjust the angle I wanted to view from inside the DeLorean.

…and some everyday fun examples:

Goofing around in our green screen portrait studio… (a daily occurrence)

Coming up in the next Fusion 360 review article…

Check out these GoPro Fusion tips on how to setup and use the Fusion camera and software/apps.