Timecode windows, a Comparison Viewer, Batch Sharing are a few others

Here we are on the heels of another FCPX Creative Summit, and we have a new release of Final Cut Pro X. It’s a dot release taking the version to 10.4.4 but depending on what you want to do it might warrant a bigger version jump than that. If you’re waiting for dupe detection (and we know who we are) then the point release is probably spot on (since we don’t get it). 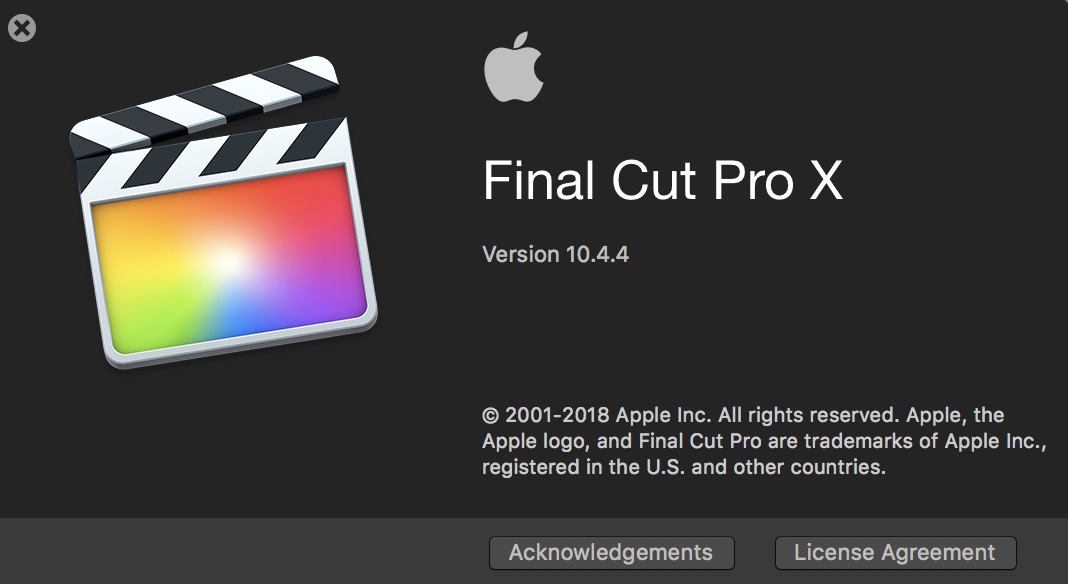 This, IMHO, is one of the most important (and most exciting) headline features to come along since the inception of FCPX. Workflow extensions are third-party tools that will expand FCPX allowing for much tighter integration between FCPX and other tools and services. These aren’t just effects and generators but entirely new panels and windows that will open and interact with FCPX in different ways. The third party developers will write these extensions so the sky should be the limit depending on what this new FCPX architecture will allow.

The natural comparison here is Adobe Premiere Pro Panels as that is also an “extension” architecture that allows third parties to extend the functionality of PPro. Some are free, many are paid, and they can do simple things like interacting with the interface to digging deep into a service. I mention PPro Panels because they provide some great functionality to Premiere that isn’t otherwise built-in so if FCPX Workflow Extensions match that it’ll be a great addition. I have every reason to think the Apple implementation of extensions will surpass what Adobe does because some of the Adobe developers I’ve talked to lament about the kludgy way PPro panels work. I think Apple will make this much tighter for developers.

Talking with Apple about Workflow Extensions I asked how functional these things might be. There are some deep connections into FCPX’s overall architecture that Workflow Extensions will be able to tap into. They’ll be able to interact with the Library and be able to do things like share playhead information. There will be some limitations though as I don’t think you’d want an extension messing around with and destroying embedded metadata. There will also be an SDK available for developers and while there’s bound to be some restrictions on the publishing of Workflow Extensions, it shouldn’t be as difficult as getting an app into the iOS app store. They will all be distributed via the Mac App Store and developers will be able to charge or release them for free.

The signature Workflow Extension for this release is from Frame.io.

The Frame.io extension gives you a window into your Frame.io account. 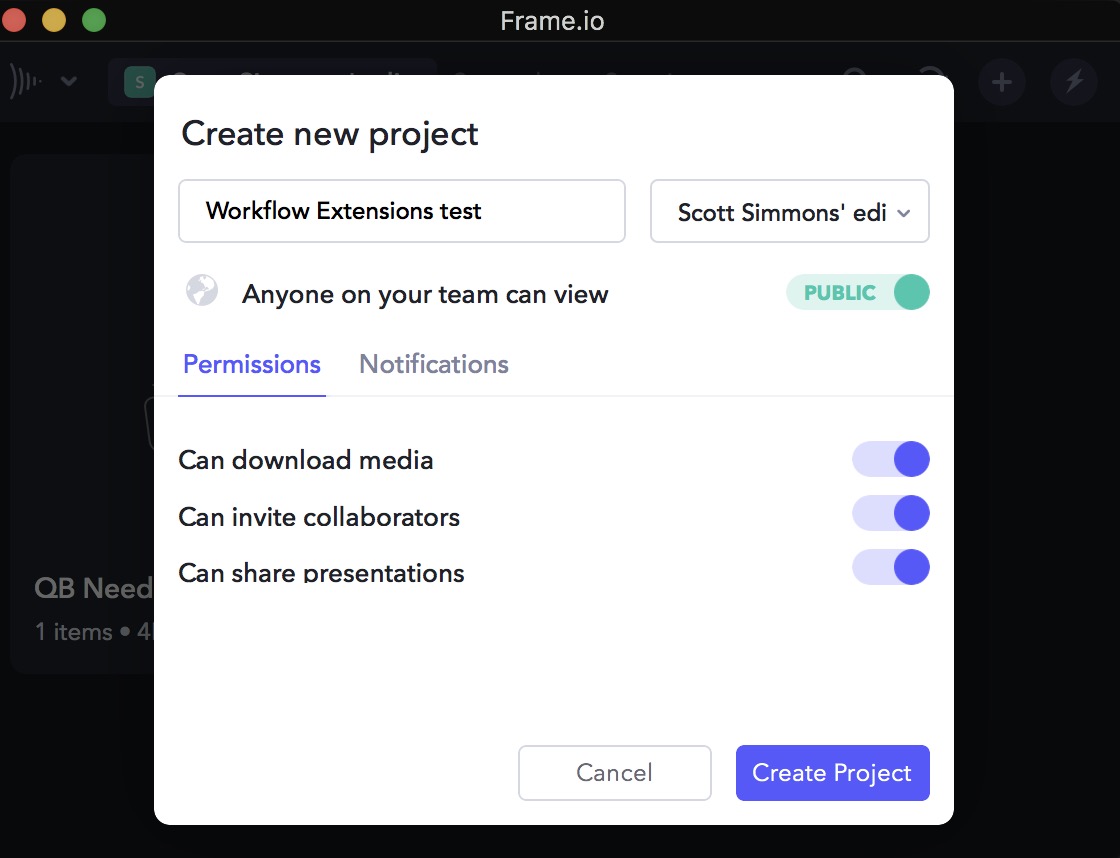 Set up a new Frame.io project right from the FCP extension. 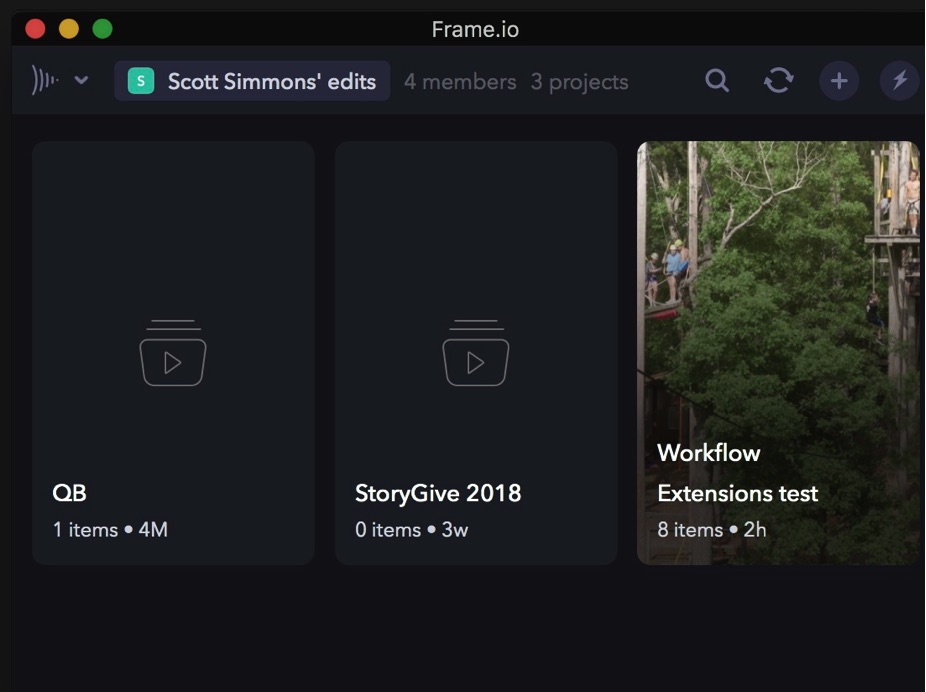 I really like the ability to drag and drop items to and from the Frame.io extension. It makes for a seamless workflow. This all seems possible by FCPX’s robust XML format as interacting with Frame.io sends a lot of XMLs back and forth. You’ll still have to interact some with the Frame.io app that lives in your menubar but this new integration makes it a lot more seamless.

Other Workflow Extensions upon launch of this FCPX version are extensions for ShutterStock and CatDV.

One significant addition to this FCPX update is a new timecode viewer. Two actually, one for the project sequence and one for the elements in the cut. They are accessed via the Window menu. 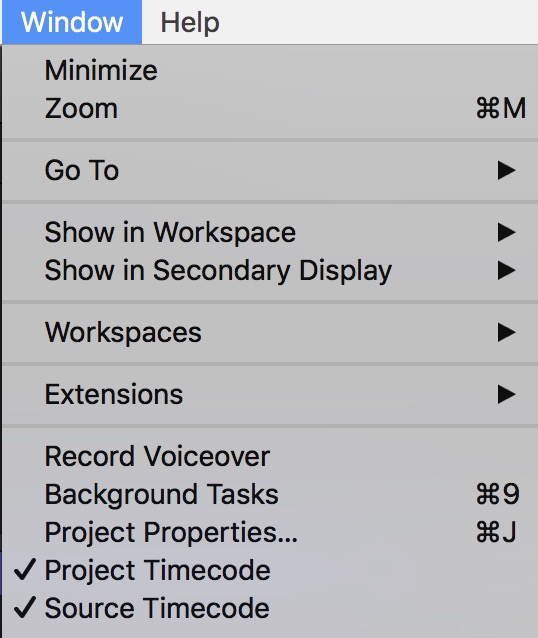 The most useful of the two will be the Source Timecode viewer as that’s the info you’re most often needing. And you can set it to different display options.

Since FCPX doesn’t have tracks the Source timecode items are reflected as you skim around as well as playback the timeline.

The different colors reflect the different roles. The gray timecode is for a disabled clip if you can see that as it zips by. That GIF above is a quick scan around a timeline

Right-click and you can copy the timecode, clip name or all the data in the viewer. It’s a useful addition and I wonder where it might go from here. It’s a bit puzzling as to why there is a separate Project timecode window (you can see the project timecode under the main viewer anyway) but it’s better to have it and not need it.

Last year at the FCPX Creative Summit we got new color correction tools and this year those tools get more support with the Comparison Viewer. 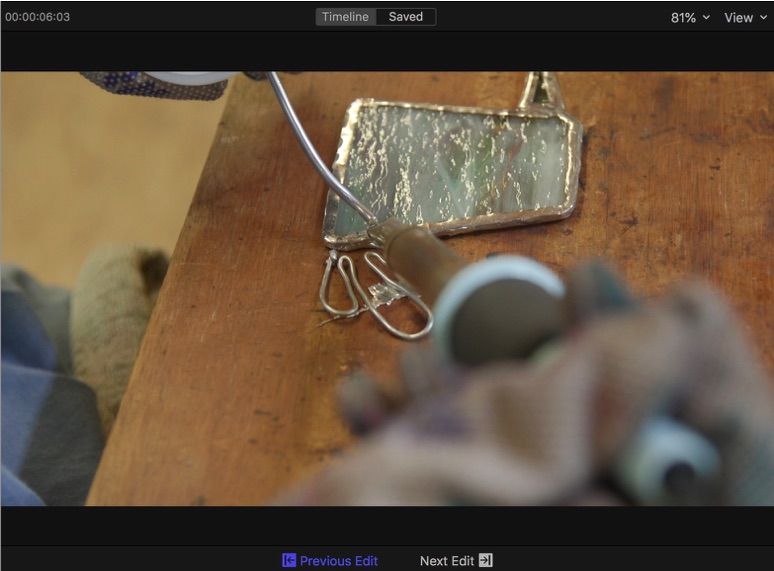 The Timeline tab is simple in execution and allows you to see the Previous Edit and Next Edit clips in your timeline. Since you’re often color correcting a shot to those before and after, it’ll be useful.

I didn’t see a keyboard shortcut for the Previous Edit / Next Edit buttons in the Comparison Viewer so you’ll have to click. There are a few new keyboard commands waiting to be mapped.

The Saved tab is where you can view a still frame that you’ve saved. That frame stays static as you move around the timeline. Saving a frame goes into a pop-up Frame Browser window so they can be recalled later. 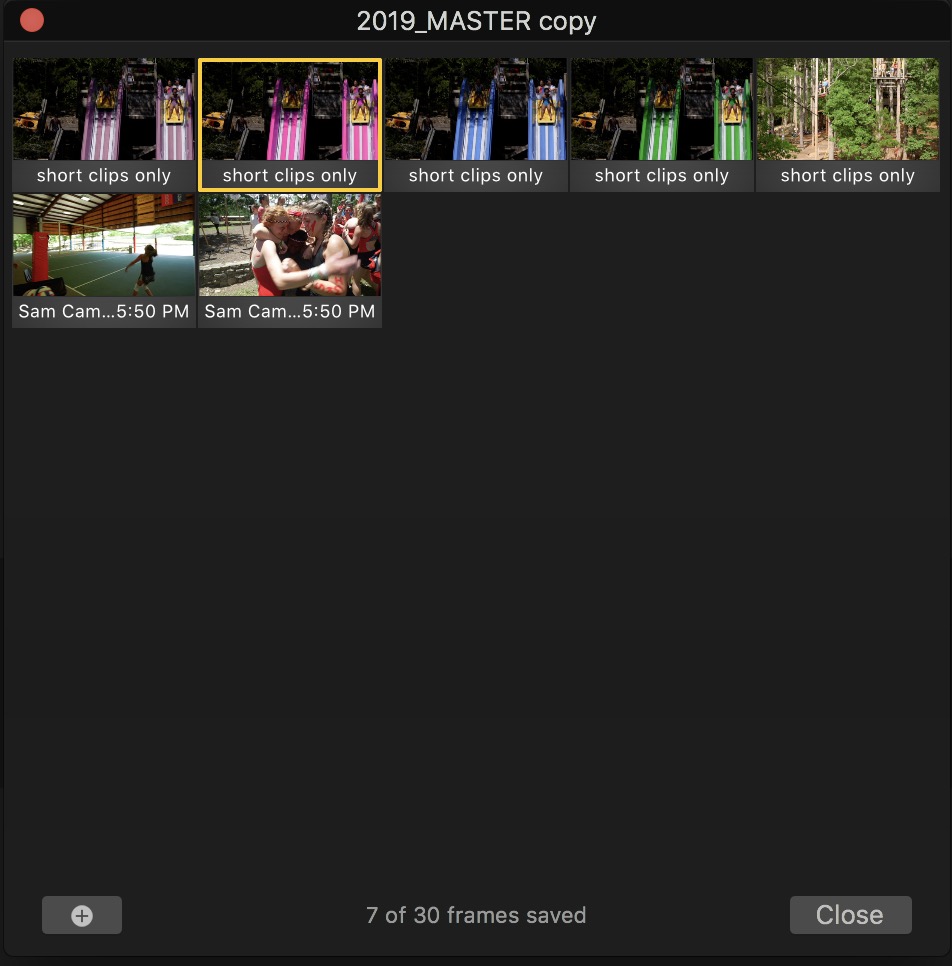 While the Frame Browser is nice it appears to be for viewing only. I can’t find a way to take a saved frame and apply that correction to another clip which is surprising and limits the functionality. That defeats part of the purpose of a frame browser / still store but this is the first implementation so maybe we’ll get that in the future. Or maybe I just couldn’t figure it out.

While FCPX has always been great about background operations which meant you could export/share many edits at once you had to initiate those shares one at a time. FCPX 10.4.4 adds batch exporting. This will be a biggie for a lot of workflows. 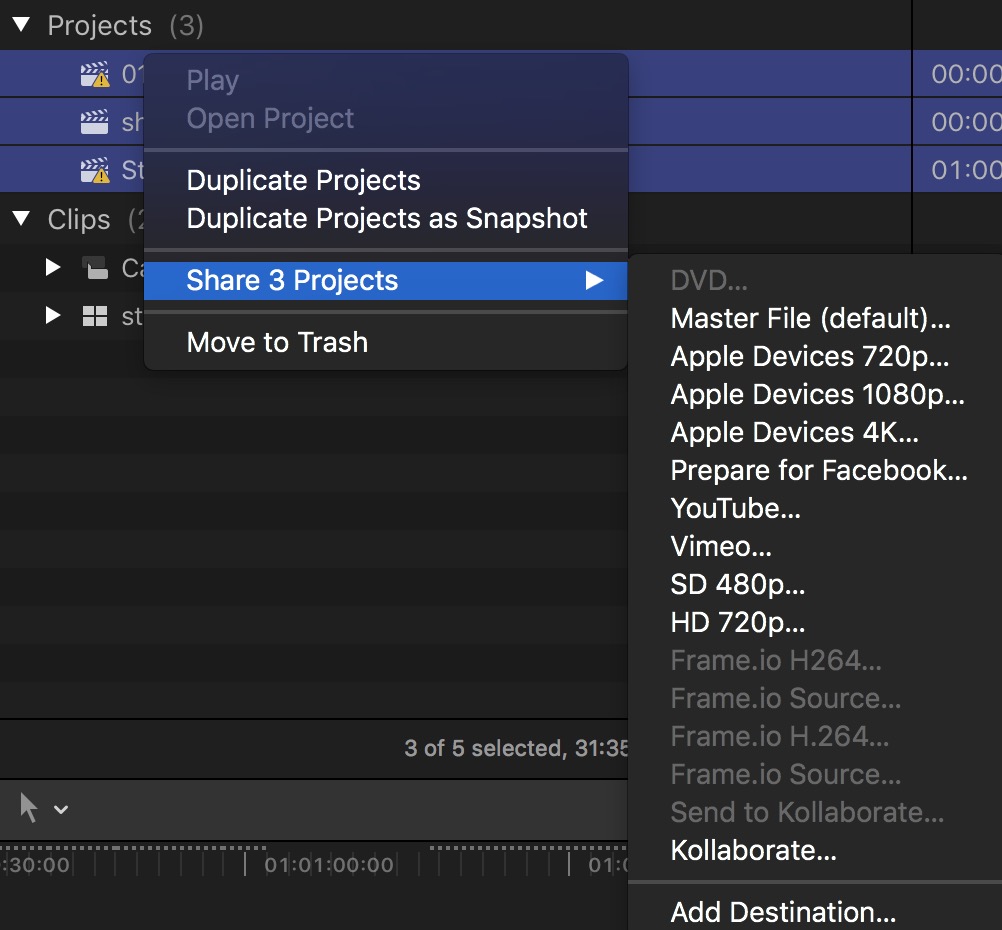 Right+click on several Projects at once and there is a new Share option. Pick your preset and you’re off. I understand why you can’t batch share a DVD but I don’t know why the Frame.io options here are grayed out (or why I have two for each, troubleshooting that soon). Perhaps it’s best to use their Workflow Extension. 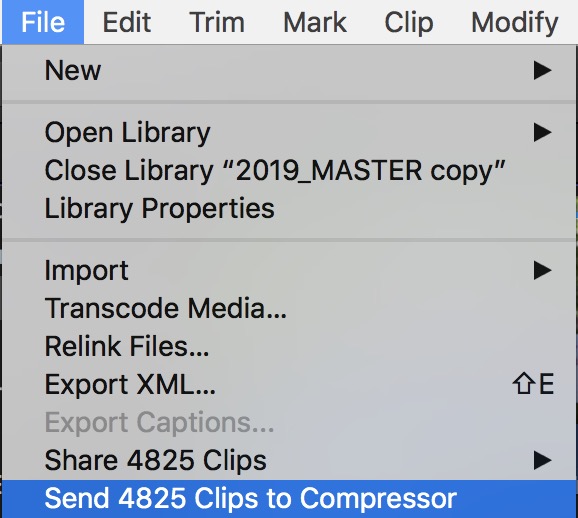 Have a bunch of individual clips you want to share? Select them all in an Event and try the File menu. I didn’t try to batch export that many clips but it’s nice to know you could if you had to.

One thing I was sure to try is to take these new windows and save them as their own Workspaces. 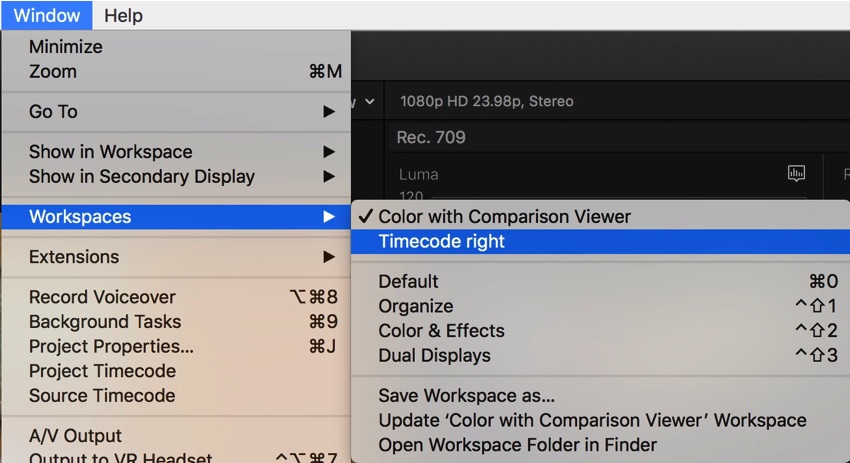 I’m happy to report that with these new floating windows they seem to, for the most part, save right into a custom Workspace. 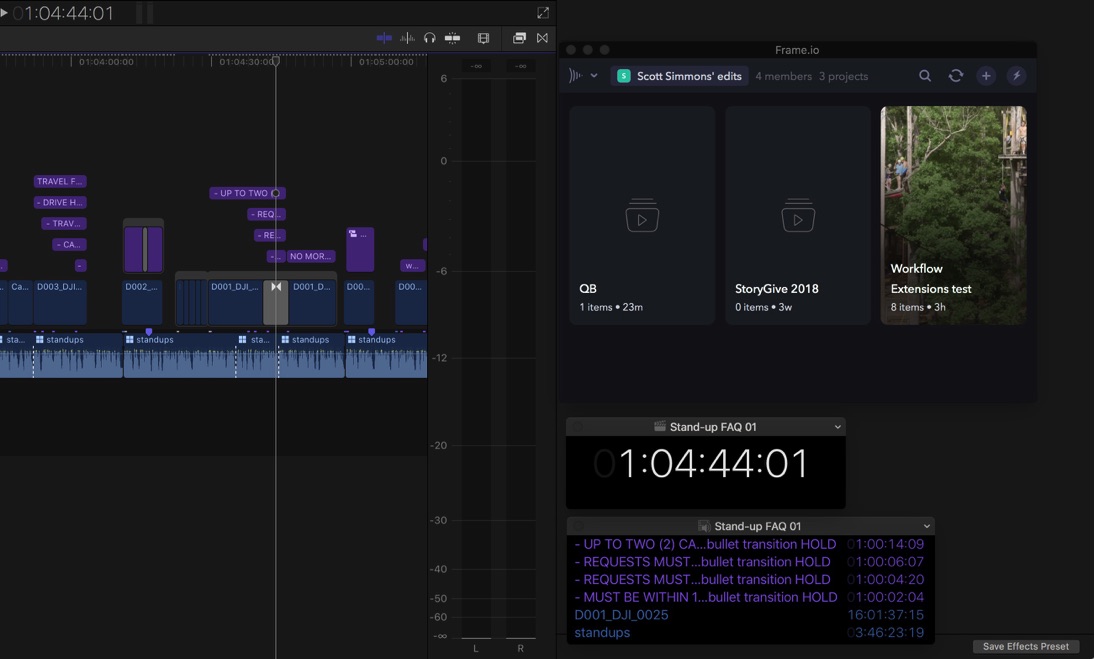 I put the timecode viewers and the Frame.io extension into a lower right space and they recalled easily with a saved workspace. My new color workspace worked too but it didn’t save the open Frame Browser.

We are still waiting on duplicate frame detection in the timeline and a Roles-based mixer. Overall I would call this a minor update if it weren’t for Workflow Extensions. I think the impact of these will be huge for the FCPX community. There’s a ton of clever third-party development going on out there and I can’t wait to see what people come up with. I do hope a business case can be made for them to keep this development active. While other features like the timecode windows and the color Comparison Viewer feel a little half-baked they will be useful and as an FCPX user, I’ll take it.

Below I’ve pasted in the other bullet point items for this release which includes updates to Motion and a big update to Compressor. Compressor gets rewritten to be a full 64-bit application but it will maintain support for older 32-bit codecs. I guess that means you can still get those Animation and Cinepak files out to something new. There are also some new effects including a new Noise Reduction effect.

I’m most happy that Apple is again using the FCPX Creative Summit as a launching pad for this new update. I don’t know if we’ll be able to depend on this every year but it makes perfect sense. I’m going to pencil in FCPX Summit 2019 for another update and hopefully one day I’ll go in person.

Additional Features:
— The latest update to Final Cut Pro X also includes a number of highly requested features from pro video editors.
— These include batch sharing which allows a user to export multiple clips or projects in one step. This can be especially useful when transcoding dailies on set for quick turnaround or delivering multiple versions of a project.
— Final Cut Pro X also adds a Comparison Viewer, a new window that lets editors view reference images while grading to ensure a consistent look across their project.
— A new floating timecode window makes it easy for video editors and others in the editing room to follow along by displaying color-coded clip names, roles, project timecode, and source timecode in a customizable, resizable display.
— High-quality video noise reduction minimizes artifacts in low light or archival footage.
— Editors can now create and deliver closed captions in SRT format or choose to burn them into their video for compatibility with a wide range of video websites.
— Improved marquee selection makes it quick to select individual clips or the entire secondary storyline which saves valuable time for common edit operations.

Updates to Motion:
— Motion, the powerful motion graphics companion to Final Cut Pro X, also gets an update today that adds a comprehensive set of color grading tools including color wheels, color curves, hue/saturation curves, and custom LUTs.
— These tools match the professional color correction features found in Final Cut Pro X and can now be used in Motion to fine-tune the look of titles and motion graphics.
— New filters in Motion include a customizable Comic effect that instantly turns any image or video into color or monochrome comic book illustration. — A new tiny planet filter lets motion graphics artists transform 360° video into beautiful spherical animations that can be keyframed to change over time.

Updates to Compressor:
— Compressor, the advanced encoding companion to Final Cut Pro X, moves to a new 64-bit engine that takes advantage of all the memory in a user’s Mac for improved performance when encoding high resolution, high framerate video.
— Compressor maintains support for 32-bit codecs, so editors can continue to work with key legacy formats.
— The app now supports SRT closed captions, which is an important format for delivering captioned video to the web and international markets.

Availability:
— The new versions of Final Cut Pro, Motion, and Compressor will be available on the Mac App Store as free updates for existing users.
— New users can purchase the apps for $299.99, $49.99, and $49.99, respectively.
— Education customers can purchase the Pro Apps Bundle for Education for $199.99, which includes all three pro video apps plus Logic Pro X and MainStage.

— This will be the 28th free update to Final Cut Pro X since its original release in June 2011.