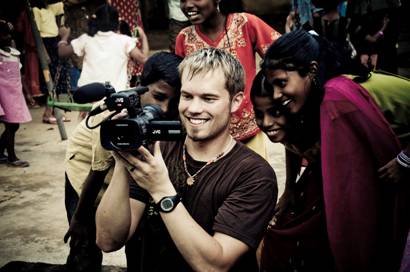 JVC Professional Products, a division of JVC U.S.A., announced today that Jeremiah Fry, an independent filmmaker based in New Orleans, used a JVC GY-HM100 ProHD camcorder to shoot video footage in leper colonies throughout India. When complete, his documentaries will detail the charitable efforts of Embrace A Village, a nonprofit Christian organization in Coimbatore, Tamil Nadu, India.

Embrace A Village provides medical treatment, food, housing, hospice, and other support services to thousands of people who are stricken with leprosy and banished to the lowest rung of Indian society. When he learned that Embrace A Village founders Joe and Patricia Clendenny were looking for someone to produce documentaries to raise awareness about the plight of India’s lepers and their organization, Fry volunteered. With his own money, Fry purchased a GY-HM100 camcorder, six 16 GB SDHC solid state memory cards, handheld lights, two LaCie 1 TB drives, and a MacBook Pro, all of which he carried from one leper colony to another across India.

“I chose the JVC camcorder because it satisfied this venture’s three most critical needs: exceptional, native HD picture quality; rugged, lightweight portability; and powerful workflow advantages stemming from the camcorder’s ability to record QuickTime .MOV files that are ready to edit in Apple Final Cut Pro,” said Fry. “Without this camcorder’s amazing price, performance, and workflow benefits, I could not have captured such incredible images, moments, and stories from such remote parts of India.” 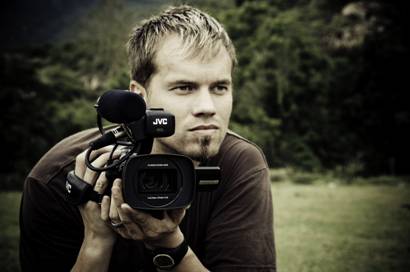 Shooting in India for over two weeks in October and November, Fry captured hundreds of hours of native 720p/24 HD video on inexpensive, reusable SDHC cards. “The JVC camcorder’s phenomenal HD picture quality captures the character and definition in people’s facial expressions and conveys what it’s really like to be in these places,” Fry said. “Because it’s so compact and unobtrusive, I could hold it and shoot for hours on end without tiring. I found that people acted naturally because they weren’t self-conscious – the way they would have been had a larger camcorder been focused on them.”

While Fry was shooting, people often grabbed the GY-HM100 or handled it roughly when trying to see the video playback on its flip-out LCD monitor, but its solid construction withstood every hit. Fry also operated the camcorder in all kinds of extreme conditions, including rain, fog, dust, high heat, humidity, and cold nights. Despite the conditions, he said the camcorder never missed a shot. While Fry expected to use six rechargeable batteries per 12-hour shoot day, the energy efficient GY-HM100 only required two batteries per day-a big bonus since electricity was scarce at most of his locations.

Each night, Fry connected the camcorder to his MacBook via a USB cable and dragged the .MOV files directly into an Apple Final Cut Pro folder without needing to spend time ingesting the footage. He also made backup copies of the video on his LaCie drives and reformatted the JVC SDHC media cards for the next day’s shoot. 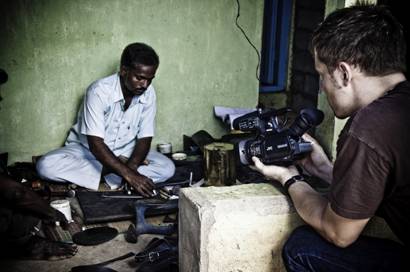 When the Embrace A Village series is finished in February 2010, two 40-minute films will be distributed on DVD. The first will be geared toward the Christian community, the other for medical, scientific, and educational audiences. There will also be two short videos for Web distribution.

“One of the best testaments to this JVC camcorder is that I was able to hand it over to my wife and traveling companion, who had no prior experience shooting with it, and she was immediately able to operate it with ease and capture fantastic footage as well,” said Fry. “For me, the JVC GY-HM100 has proven to be very enabling technology. It has put an incredibly powerful, affordable HD studio right in my hands.”

ABOUT JEREMIAH FRY
To raise money for video equipment and travel costs, Fry operates his own freelance media business, Light in Motion (www.lightinmotion.me). In his day job, he works as a videographer for Church of the King, in Mandeville, La. For more information about Embrace A Village, a 501c3 nonprofit organization, please visit www.embraceavillage.org.

ABOUT JVC U.S.A.
Headquartered in Wayne, New Jersey, JVC U.S.A. is a division of JVC Americas Corp., a wholly-owned subsidiary of Victor Company of Japan Ltd. JVC distributes a complete line of video and audio equipment for the consumer and professional markets. For further product information, visit JVC’s Web site at http://pro.jvc.com or call (800) 526-5308.