What are the permitted hours of filming? Do any limitations apply when filming on public property? How will the film industry keep cast and crew members safe? FilmLA has all the answers. 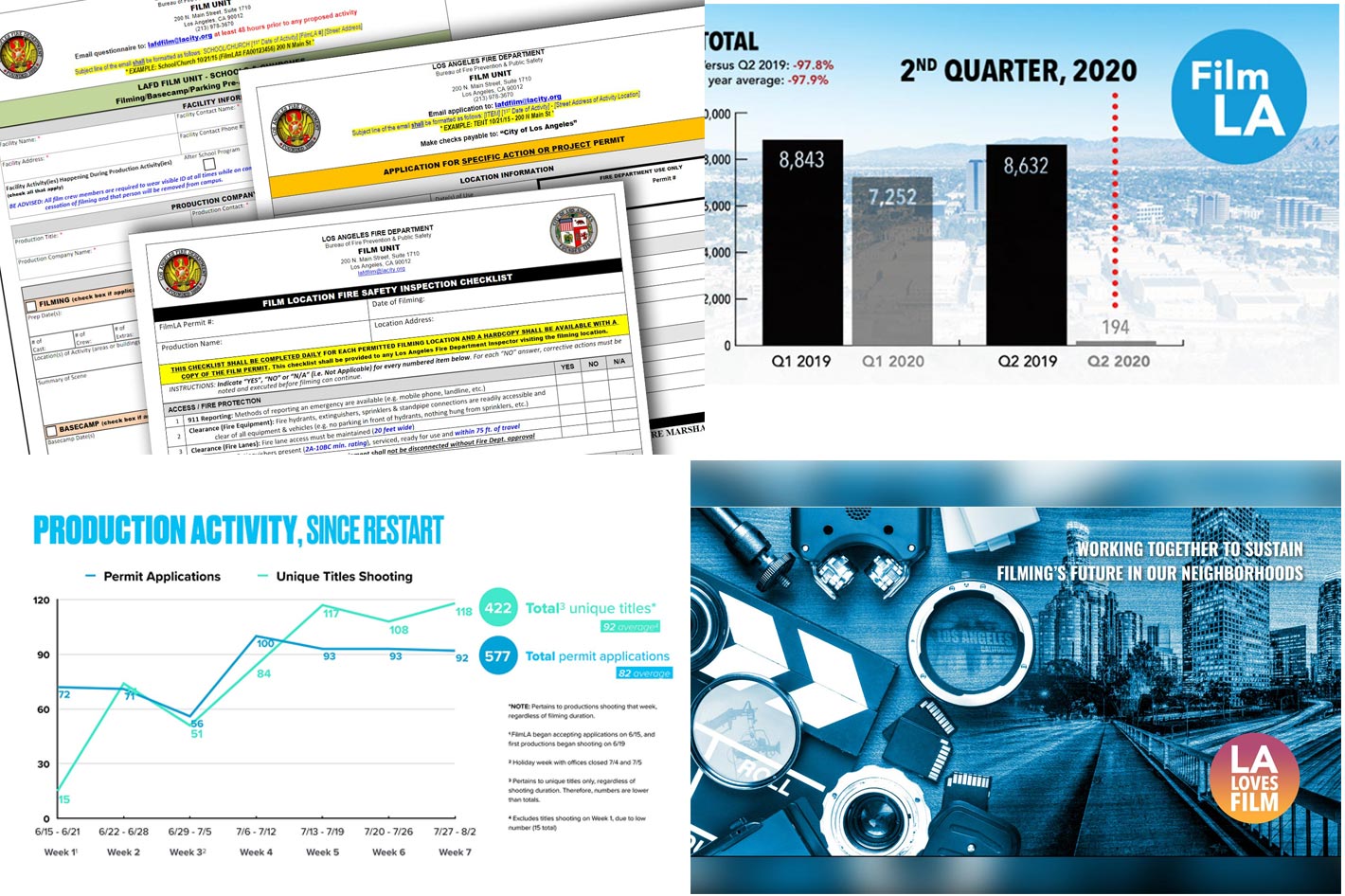 Since June FilmLA received close to 577 film permit applications for filming and expects production to grow in September, as scripted television and feature production pick up.

FilmLA, partner film office for the City and County of Los Angeles and other local jurisdictions, recently issued an update regarding regional filming activity following the reopening of most areas in LA County to production. After receiving the go-ahead from local authorities to begin processing film permits, FilmLA resumed remote office operations on June 15. Limited filming activity was underway in the region by June 19. 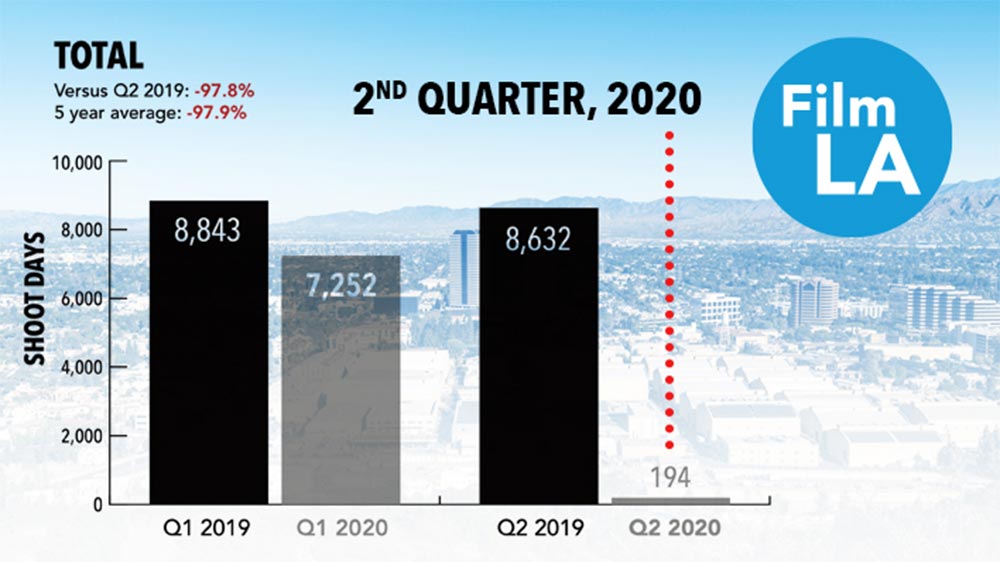 The pace has been slow, and the numbers show the extent of the lockdown. FilmLA’s quarterly report, which compares April-June 2020 with the same period in the prior year, offers a stark portrait of an industry on lockdown – revealing that overall production declined 97.8 percent to just 194 Shoot Days (SD) last quarter. Unsurprisingly, the report notes, “ last quarter also returned the lowest filming levels on record. By State and County order, production remained shut down from March 20 to June 15.”

According to FilmLA, “although State and County officials gave film production the green light to resume in late June, the return to work to-date has been gradual and cautious.” Since filming permits became available, FilmLA has received approximately 577 film permit applications from 422 unique projects. Daily application intake has increased marginally over time, growing from approximately 14 applications per day in late June to 18 per day in late July. 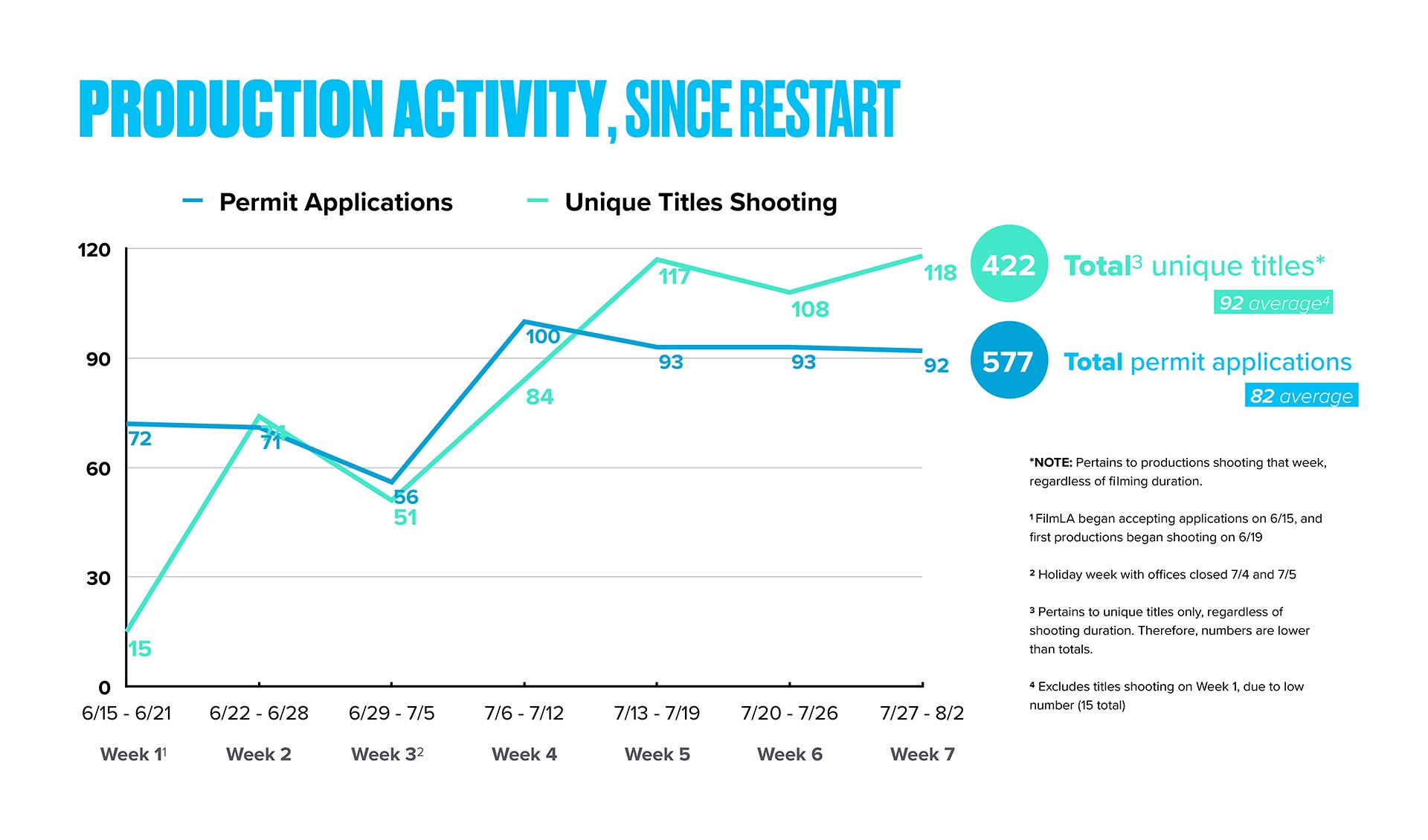 This is, says the organization, “around 34 percent of the application count FilmLA would expect under normal conditions, upheld principally by activity in the advertising industry (still photography and commercials). TV Reality production has also started to resume; FilmLA cautions that overall activity will remain low until scripted television and feature production pick up – which is expected in early September.”

“It is not an exaggeration to say that there are few other industries seeking to reopen as responsibly as the film business,” noted FilmLA President Paul Audley. “Hundreds of smaller projects have successfully applied safe set practices as outlined in state and local public health orders. Meanwhile, continuing dialogue between studio and labor representatives is driving focused attention to cast, crew and vendor safety and compliance.”

FilmLA is the place to go to know exactly how the situation is evolving in the LA area. You’ll find there not only reports, as the second quarter report that reveals the period was a near-total loss for on-location filming, but also answers to multiple questions, from “What are the permitted hours of filming?” or “What type of health protocols apply when filming on-location?” to “Who can we contact if they see productions not complying with guidelines?”

Currently, all 16 of the city and county jurisdictions served by FilmLA are open to filming, while one of the six school districts served by FilmLA has also reopened to host filming and base camp parking on campus. 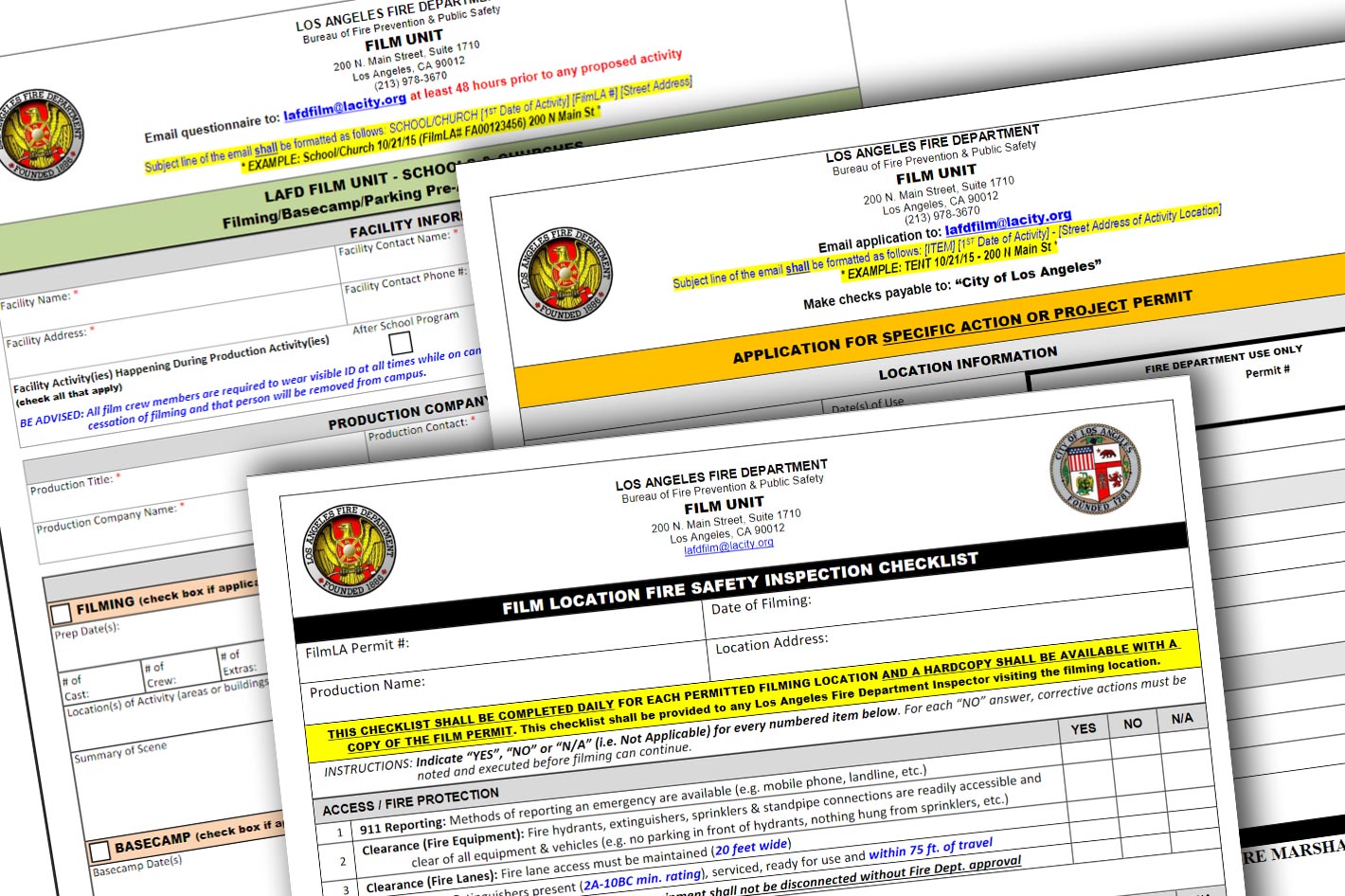 FilmLA’s COVID-19 Resource Center (www.filmla.com/covid-19) lists the areas served by FilmLA and their current filming availability. This page also includes links to resources from film industry organizations and the Los Angeles County Department of Public Health, including mandatory Health Orders that apply to filming on location. In fact, the website functions as a hub for filmmakers who need to know all the important aspects of filming under a pandemic. Add it to your Favorites and visit it regularly. 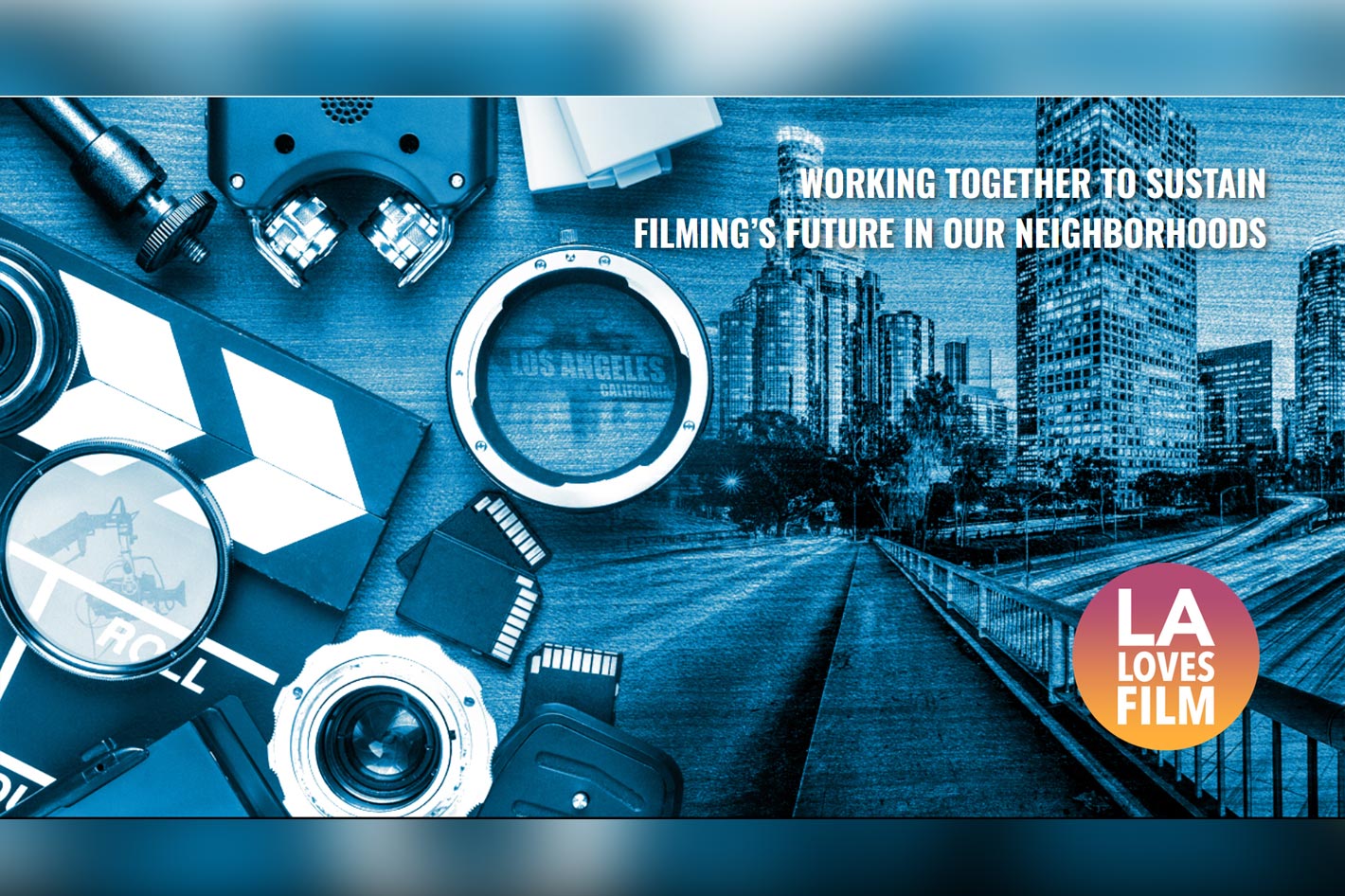 “As production continues to pick up, it’s essential that the hosting communities are assured about the industry’s commitment to safety,” added Audley. “Being closed to the public, the physical film production environment is among the safer work settings available to essential workers in California. The presence of a film company, working with a valid permit and adhering fully to County health orders, is something we hope local communities will welcome.”

FilmLA is a not-for-profit organization and the official film office of the City and County of Los Angeles, among an ever-increasing roster of local municipalities. Through expedited permit processing, comprehensive community relations, film policy analysis and other services, FilmLA works to streamline and enhance the on-location filmmaking process for communities and content creators, to ensure the Greater Los Angeles economy continues to thrive. 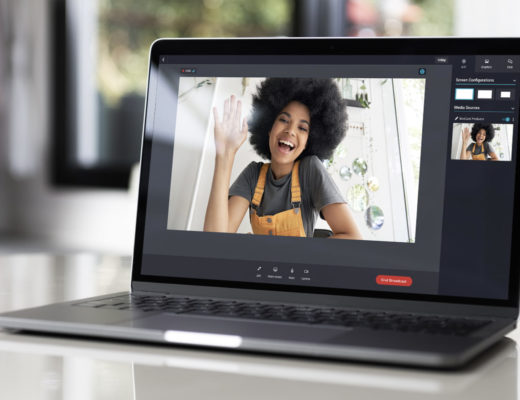